Previews hint that the two get cozy in the jacuzzi, but also Drake teased that viewers may see her having a “boatmance” this season.  “An interesting thing for me is I’m a lot more open to romance on a boat,” she dished with Decider. 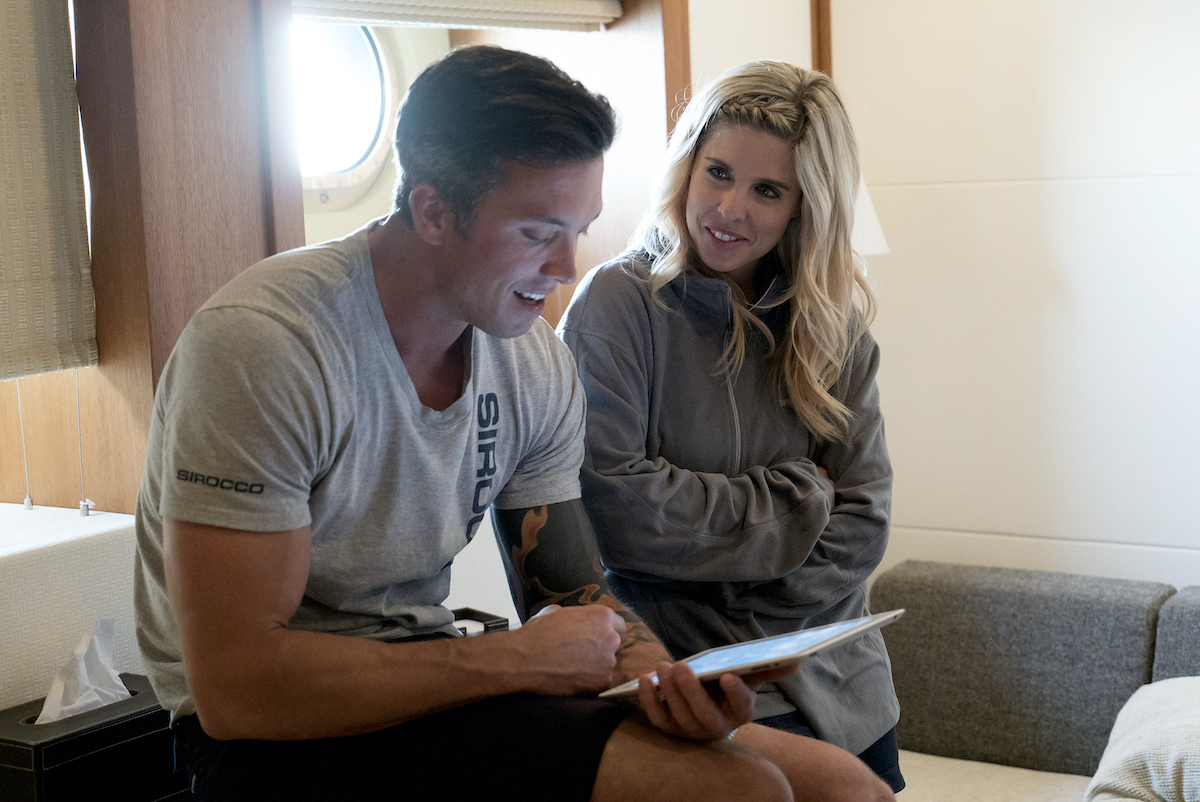 “Open to that, if anything’s going to come from that,” she hinted. “Trying to balance work and romance, which is something I’ve always been against. But I’m being kind of open to it this season.”

“There’s a lot to see this season. I think it’s probably going to be one of the craziest seasons in the whole franchise history,” she said. “There’s just so many exciting things — you never know what’s around the corner. Things that even blew my mind. I’d say, for me, there’s a lot of growth in my character this season.”

Drake isn’t the only stew hooking up with a deckhand. Third stew Jessica More and deckhand Robert Westergaard didn’t waste much time before they hooked up. The two seem smitten with each other, but Westergaard shared he’s also involved with someone else on land.

Needless to say, their boatmance seems to remain out at sea. More and Westergaard don’t follow each other on Instagram. Plus More describes the romance as being intense. “They always say don’t screw the crew,” she told Showbiz Cheat Sheet.

Anyone have any good pick up lines for me to attempt to flirt with the new South African stew @bugsydrake ? #belowdeckmed @bravotv

RELATED: ‘Below Deck Med’: Jessica More Says She Was Just as Shocked as the Viewers by Lara Flumiani

“I like to figure people out,” she said because Westergaard was very mysterious at first. “It really drew me to him because I just found it intriguing him being quiet. And he always looked like there was a lot of things going on in his head. So I think just my curiosity got the best of me and I wanted to figure out what was going on.”

Drake shares why she returned to the show

Drake told Decider she was “done” with Ferrier after season 2. “I was caught off guard completely, hearing from Captain Sandy,” she admits. “I’d just finished [another] stint and was just taking a little bit of a break before I got on another boat. The call came at pretty much the perfect time. When I first got the call from her, I was a little bit apprehensive. I wasn’t really sure what position she was calling me in for.”

“My questions for her were: ‘What position am I coming to fulfill?’ She mentioned it was a second stew position, and my first thoughts were: am I going to be working under Hannah again? Which was kind of a thing for me, because I’d always said after last season, I’m done with Hannah,” Drake added.

Monday’s Just became a lot more fun for me! ❤️✨⚓️ I am so excited to have you all join in on the adventure tonight! Don’t miss out on #BelowDeckMed at 9/8c on @bravotv

Also, “I would never take another second stew position,” she said. “It was something I’d tried and tested and obviously didn’t work for me in that case. It was definitely a big no-no. But Sandy is somebody I really respect, and I kind of felt, well you know what, why not? I’ve got the time to do it. Might as well help her out, she’s in a bind. Maybe it’s a shot at redemption for my relationship with Hannah. Maybe we can turn things around. I tried to look at it in a positive light.”

So far, so good when Drake initially returns. But how long will that last? “I mean, I try to keep it at least for a charter, I don’t turn too negative,” Drake said. “This time around, I took the whole idea of it in a more humble approach, let me put it that way.” She added, “I tried to put my ego aside. I had to keep reaffirming, in my mind, that I wasn’t coming there for Hannah. I think that helped with keeping it positive and light.”