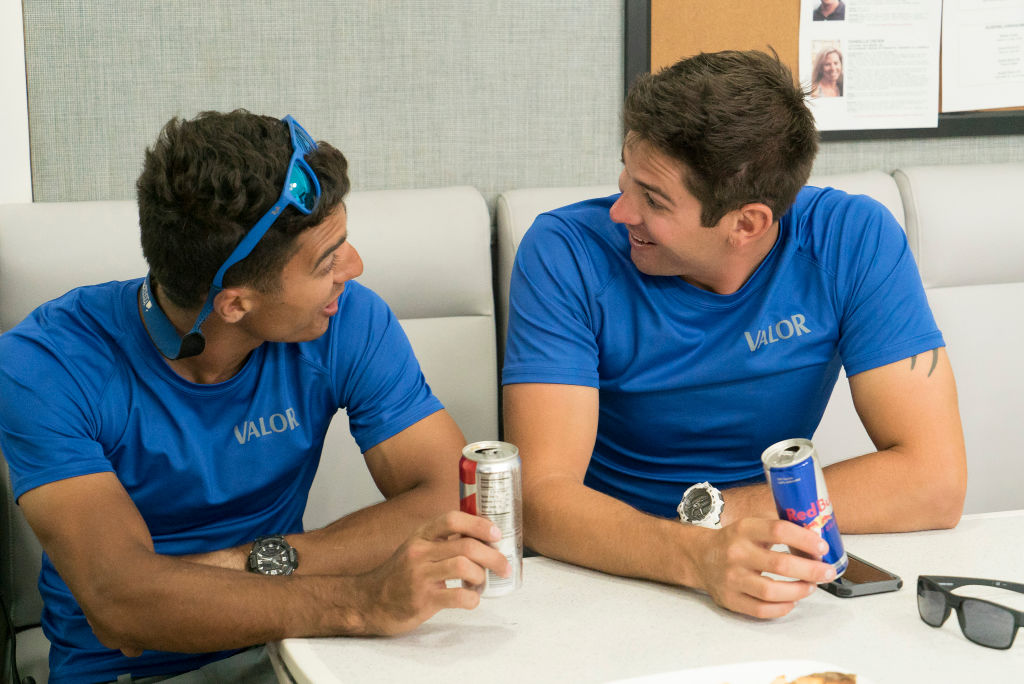 Scholly couldn’t put his finger on why exactly, adding, “Nothing against them, not talking sh*t.” However, he called out Macy-O’Toole specifically which was surprising since Macy-O’Toole is one of the few crew members who hardly ever receives hate.

He also talked about who he vibed with during the Below Deck 100th anniversary episode party held in New York in early 2020. Plus added that he and Chastain didn’t exactly get along during the party either.

‘Everyone loves Colin, you’re the only one!’

Scholly chatted with Bravo’s The Daily Dish and shared his feelings in a Bravo digital original. “I don’t know, it’s the guy from the Med,” he said searching for Macy-O’Toole’s name. “Well, actually sh*t, what’s his name? The guy in the Med, I’m just not a fan of. The guy who sings and raps or whatever?” Cue the montage of Macy-O’Toole’s catchy promo rap.

“Everyone loves Colin!” Bravo’s The Daily Dish exclaimed. “You’re the only one who doesn’t!”

Many crew members were meeting for the first time. Scholly said some of the crew went to a bar after the episode wrapped. But he first shaded crew member Trevor Walker. Walker appeared along with Scholly during season 4 and only lasted a few charters. His braggadocious and aggressive behavior earned his a plane ticket home that season. Scholly said he doesn’t think Walker has changed despite becoming a father since the series ended.

What a boat-iful looking crew! Cheers to 100 episodes of #BelowDeck 🥂

RELATED: Exclusive: Captain Lee From ‘Below Deck’ Wants Josiah Carter Back (and Shares Which Crew Member Is the Biggest Prankster)

“Me and Josiah ended up going out all night, going back to my hotel room, talking all night,” he recalled. “Walking to McDonald’s, getting a Big Mac at like four in the morning. It was quite the after-party and pre-party hanging out with all of them. They are amazing people.”

But he didn’t have a blast with Kate Chastain

Chief stew Kate Chastain was a constant throughout the anniversary episode. And while Scholly said he thought he left the show on good terms with her, she wasn’t about him during the evening.

“That night of the 100th episode in New York, I had a really bad experience with her, which me and her have always been friendly,” he said. “But I don’t know what her problem was that night, I think she was kinda a little bit agitated about something that happened that night. But definitely, when me and my girlfriend were talking to her she was not having it.”

It's a yacht-pocalypse! See how the crew handles a smoky situation TONIGHT! #BelowDeck

RELATED: ‘Below Deck’: Nico Scholly Had a ‘Bad Experience’ With Kate Chastain During the 100th Episode Party

Scholly appeared on two seasons with Chastain. “When I was doing the seasons with her, we’ve always been friendly and always had a good relationship, I thought,” he recalled. “But near the end, she’s just exhausted from it all? Or I don’t know enough to make a comment on the way she was feeling or what was going on.”

Rafael Nadal’s Tight Pink Shorts Are Getting Him So Much Attention!

Kendall Jenner Received A Letter From a Secret Admirer