Sunday Brunch is a bit of an odd show at the best of times, juggling celebrity guests with cooking and specialist segments from harp-making to a talk from ‘Bat Lady’ Jenny Clark.

But invite a non-British guest who doesn’t know what they’re getting into on the show and all hell breaks loose.

Case in point: today’s programme (May 27) welcomed Beverley Hills, 90210 star Jason Priestley to the studio, and barely half an hour in after discussing everything from carpets and underlay to yesterday’s Champions League final, it’s safe to say the Canadian-American actor was a little lost.

“Here’s what I didn’t know,” he began. “I didn’t know that this was a cooking show, a home remodelling show… it’s everything.

“This show is everything to everyone.”

He soon got into the swing of things, though, easily responding to Tim Lovejoy’s question about whether he speaks French by reeling off his answer in French and sharing facts about the Quebec variation of the language, and then even engaging in the carpet chat when it came back around (again).

“Well, [Canadians] believe in a very hardy, deep-pile carpet,” he joked. “They believe that you should always change your underlay.” 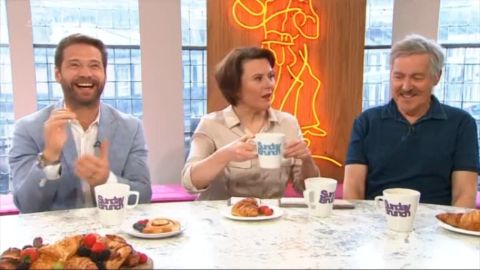 Priestley was on the show to talk about the upcoming return of Private Eyes, a comedy-drama series about a former hockey player-turned-private investigator, which airs on Universal TV in the UK.

“It’s a very old-school, throwback detective show,” he explained. “We really wanted the tone of the show to feel like those great, old detective shows from the late ’70s, early ’80s, that we all grew up watching.

“We felt like there was a lack of that kind of programming on TV right now.”

Body found in London garden may have plunged from airplane