Big Brother housemates got in a quick trip to China in Thursday’s (October 4) episode and it was absolutely one for the ages!

Of course, Channel 5 didn’t actually pony up the cash to send its housemates to actual China since it’s cancelling the show in a few weeks, so instead put contestants on a makeshift Big Brother Airlines aeroplane for five straight hours for a task. 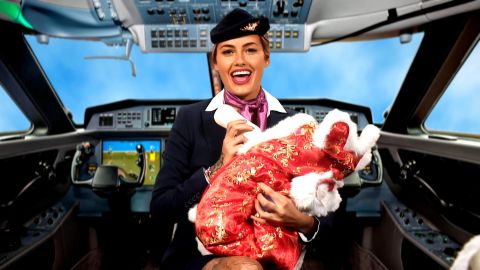 Because Big Brother is sadistic, Zoe, Sian and Tomasz were forced to become the cabin crew and serve the others all throughout the “flight” — and it turned out that the passengers were quite unruly indeed.

The trouble started when they were forced to take turns caring for a crying baby doll, named Bao Bao. Or, “Bobo”, as Lewis mistakenly assumed. Some housemates just didn’t want to play along with the task even a little bit.

Take, for example, Isaac. It doesn’t take much for him to get moody anyway, but he snapped at Kenaley when he got sick of her practicing her Chinese translation audio out loud for everyone to hear.

When Isaac ordered the flight attendants to “tell [Kenaley] to be quiet”, the undefeated Gamechanger champion rightfully got offended at his rude behaviour and shut him up real quick.

All of you people responsible for initially putting Kenaley on the block for nominations this week should feel deep shame — she is truly an iconic housemate in the making.

Tensions were running high between Cameron and Akeem too, although Cam wasn’t about to launch into a Kenaley-esque rant over it. (Boo, Cameron!)

Isaac, and the rest of the housemates, would get an even bigger surprise when they actually ‘landed’ in China (which was really just a made-over version of the house) because suddenly Big Brother was only communicating with them in Mandarin Chinese.

This gave us sheer brilliance, like a clueless Cameron trying to follow Big Brother’s prompts in the Diary Room, before staring helplessly into the camera: “Oh, I can’t. I don’t know what’s going on! This is horrific.”

Is this the greatest task ever? It’s definitely in contention:

Big Brother continues with the live eviction and the arrival of new housemates on Friday (October 5) at 10pm on Channel 5.

TREVOR PHILLIPS on schools too afraid to help white boys

“As a disabled person, my healthcare has been forgotten in the pandemic”