Bradley Walsh, 60, was on hand to try and help former Strictly Come Dancing star Judy, 61, broadcaster John Inverdale, 63, actor Bernard Cribbins, 91, and television personality Scarlett Moffatt, 30, win some money for their chosen charities. Before they could do so, the team had to take on all five Chasers, who were dressed as iconic characters from the history of music. However, in the midst of The Chase Christmas special, the ITV quiz show host lost his composure and as a result, didn’t complete the question he was asking the tennis coach and her opponent, Jenny ‘The Vixen’ Ryan, 38.

The moment came when the presenter asked: “A young girl kills the first person she meets and then teams up with three strangers to kill again’ described which film?”

Explaining the choices of answers the pair had to choose from, Bradley said: “A, Into the Woods, B, The Wizard of Oz, C…”

Unfortunately, he couldn’t say the latter option of Annie Get Your Gun as he burst into hysterics thinking Wizard of the Oz was an absurd answer.

However, the countdown of the clock began and as a result, both Jenny and the former Strictly contestant locked in their answers.

Realising he’d made an error and the game had continued without him, the host declared: “You can’t! What? No! I haven’t said the last one yet.” 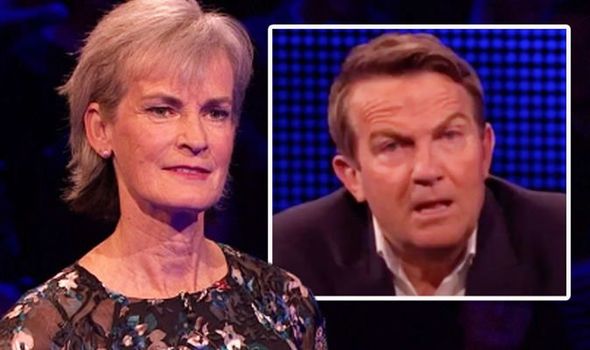 We will use your email address only for sending you newsletters. Please see our Privacy Notice for details of your data protection rights. The Chase: Bradley Walsh left in hysterics at rudely worded answer

Frustrated over the mishap, Bradley asked: “Who pressed? I haven’t said C yet!” but Judy thought she’d hit back at the presenter.

“I’ve always been quick off the mark,” she said, silencing the host of the show as he smirked at the camera.

The presenter then wanted to continue with the game as he told the tennis coach she had locked down Into The Woods as her answer.

It turned out the tennis coach was incorrect and the answer was Wizard of Oz and the presenter said: “Well, I’m never watching that again!”

Luckily, the former Strictly contestant managed to make it back for the Final Chase after adding £3,000 to the jackpot.