Hollywood star Richard Dreyfuss has hit out at Ten host Lisa Wilkinson, claiming he was unfairly ambushed during an appearance on The Project on Sunday.

The Jaws star made the comments on rival network Nine's Today Extra on Thursday morning, reading from a written statement as hosts David Campbell and Sonia Kruger looked on silently.

"I was mugged the other night in Sydney, Australia, not by a petty thief, but by the host and hostesses of a talk show called The Project," Dreyfuss, 70, read. 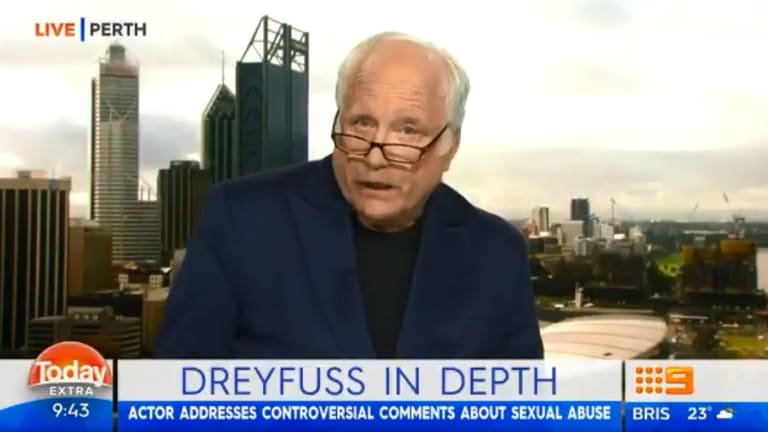 Richard Dreyfuss hits out at The Project.

The actor, with actress Kathleen Turner, had appeared on The Project on Sunday evening to plug their appearances at the Supanova pop culture convention, when Wilkinson questioned Dreyfuss on being implicated in Hollywood's #MeToo movement, following accusations made by a woman in November that Dreyfuss had exposed himself to her in the '80s.

In his statement on Thursday morning, Dreyfuss criticised The Project for ambushing him with the question in what was supposed to be a "light and friendly chat".

"Light and friendly did not survive until the end of the first sentence," he said, angrily accusing The Project of not revealing their real line of questioning before the on-air interview.

"They never asked me to have the chat they wanted to have. I think I might have said 'Yes' had they asked it in the proper tone," Dreyfuss told Today Extra.

"Instead they chose to commit a breach of ethical behaviour, meant to be malignant and sly and known as wrong by every journalist in the world… unless you're talking to someone who you're trying to entrap because you think he's a murderer or a rapist."

He continued to accuse The Project of "trickery" and embracing US tabloid-style gotcha journalism.

"In my country there is an enormous decay going on, an assault and drowning of this kind of trickery is going on every day," he said.

"I would ask why you would want to emulate America at its worst?… Don't go down with a sinking ship. That's it."

On Sunday's The Project, Dreyfuss had spoken openly on his past flirtatious behaviour, but said he didn't believe it had ever been non-consensual.

"Between the years 1979 and 1982, I was a lowdown dirty dog. And I did lots of things I'm ashamed of now. But they were all culturally supported," Dreyfuss told Wilkinson on Sunday.

He appeared to be defending himself against the accusations, when co-host Tommy Little was forced to wrap up the segment as the show's time expired.

Dreyfuss will be appearing at the Perth leg of Supanova this weekend.

How old is Julie Andrews, why isn't she starring in Mary Poppins Returns and what has she said about the film?