Now that viewers have had a whole week to bask in the absolute joy that is having Mary Berry back on our screens to judge a BBC One cooking show, Britain’s Best Home Cook viewers can now turn their attention to the really nitty gritty here: the food.

Or, as in tonight’s (May 10) episode, the soup. Because in one of the challenges on tonight’s show, the judges were served up a lot of soup. And we mean A LOT.

After the contestants had tackled their first challenge, which involved cooking their ultimate fish dish, the next challenge saw the home cooks tasked with building up a meal around one ingredient: squash.

And, well, what else do you do with squash except make soup? 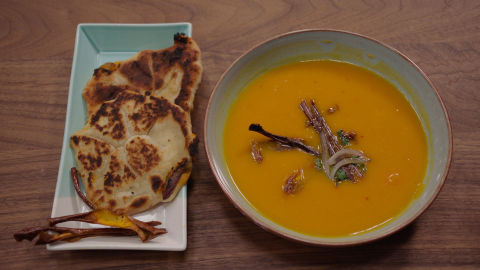 The contestants were given the choice of three squashes for their recipes – butternut squash, onion squash and a pumpkin – and, after a night of researching squash recipes, five out of the remaining nine cooks ended up cooking soup.

Although, to be fair, Mary did tell them not to go too elaborate with their dishes, so this is really all Bezza’s fault – and we like to imagine that the Sweary Berry Twitter account perfectly encapsulated what the real Mary was thinking:

After both challenges, it was ultimately Trevor, Q, Dip, Phillip and Josie who were left to face this week’s elimination round, where they were asked to make a meringue roulade.

Equipped with a detailed recipe, all the ingredients they need, 45 minutes to bake it and the four safe cooks watching on, it was ultimately Q who was sent home – and even if viewers thought it was quite a close call with Josie, at least they were still cracking Bond jokes until the very end:

Britain’s Best Home Cook continues next Thursday (May 17) at 8pm on BBC One.

Police arrest man, 24, after 50 trees chopped down across Surrey