Britain’s Got Talent viewers were left shocked tonight (May 31) as circus performer Sascha Williams risked his life in a highly dangerous balancing act.

The audience were left open-mouthed as Sascha climbed onto a platform and balanced on an ever-growing tower of wobbly blocks.

And if that wasn’t enough, he then set the whole thing on fire and started playing an electric guitar.

Even when the flames grew perilously close to him and seemed to be setting the stage ablaze, Sascha barely seemed to break a sweat and carried right on with his act.

Thankfully he came away from the act unscathed, but the judges were clearly terrified, with Amanda Holden declaring: “I can’t take much more!”

And Simon Cowell was clearly very impressed, calling Sascha “the most dangerous act, genuinely, that we’ve seen on this show”. 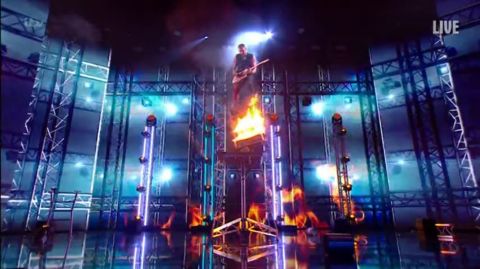 “You said nothing and set fire to yourself and played guitar and nearly broke your neck three times. This was so cool,” he added. “It’s the hardest thing to do.

“You have to be slightly crackers to do it. You really do deserve a place in the final.”

And David Walliams simply said: “Who would have thought wobbling on top of things would be so entertaining?” 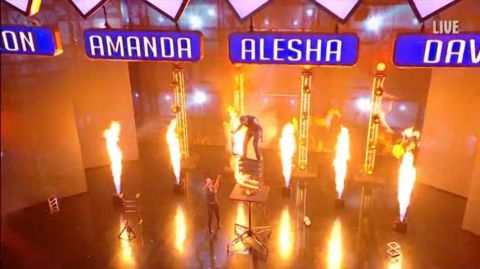 Viewers at home were just as impressed:

Sascha will discover his fate in tonight’s results show, airing at 9.30pm on ITV.

I can make any woman orgasm, says tantric sex guru