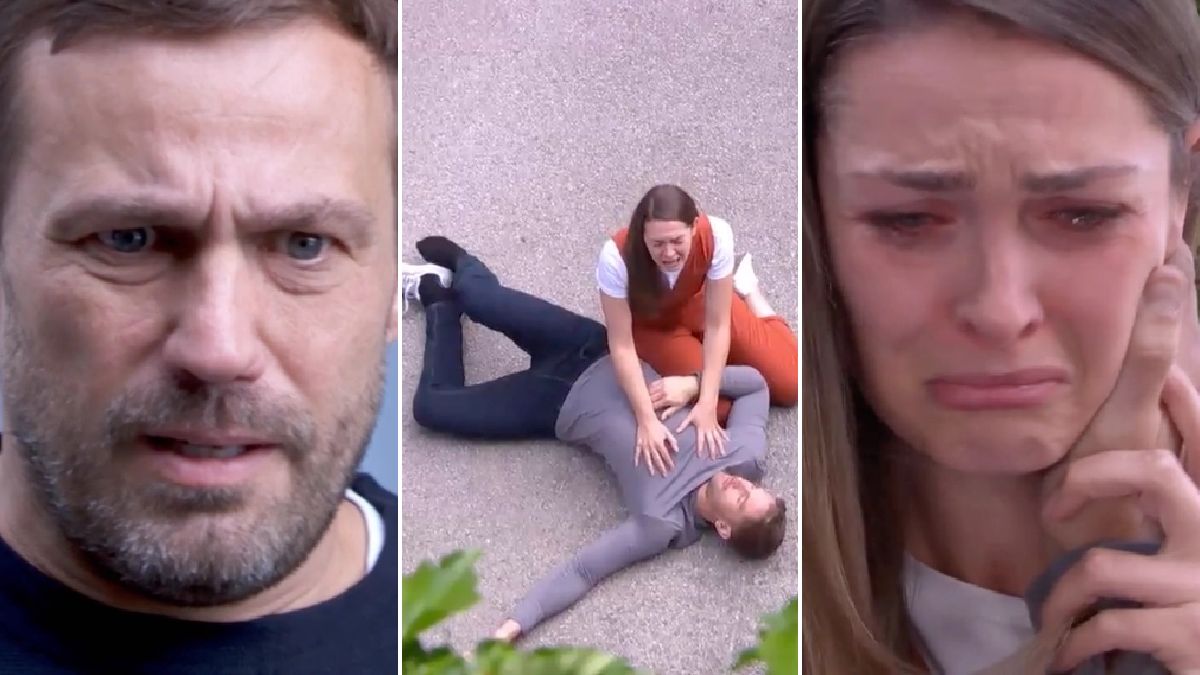 The popular duo had decided to give things another go on Tuesday (September 14), but little did they know that scheming Summer Ranger (Rhiannon Clements) had returned for revenge.

With the coast clear, PC Franks informed Sienna and Brody that they could return to the village, following their stay in the safe house.

Sienna, however, wanted to make a quick phone call to Liberty Savage (Jessamy Stoddart), and therefore she headed off on a stroll to tell her sister all about how she and Brody are back together.

‘He hasn’t told me how he really feels,’ she added. ‘This time, I want Brody to be the one to say I love you first.’

The high school teacher was on cloud nine, but she soon came back down to earth when she set her sights on Summer, who was pointing a gun at her!

Summer made it quite clear that she was there to finish the job, informing her that she will have her revenge.

The schemer directed Sienna towards a nearby cliff, and Brody – having worked out what was going on – approached, and begged her to reconsider.

‘I’m going all Old Testament,’ said Summer, clearly hellbent on following through on her plan. ‘An eye for an eye. I get rid of [Sienna] and you spend the rest of your life in agonising pain.’

Summer turned the gun on Sienna once more, but Brody ducked in the way, pleading for her to direct her hatred towards him and to leave Sienna out of this.

He told her that he would go to the police and confess everything that he and Warren Fox (Jamie Lomas) did to Cormac (James Gaddas), thus allowing Summer the justice she so desperately craves.

In return, he simply wanted Sienna to remain unharmed.

Summer agreed to his proposition, and the trio reconvened in the Folly, as Brody said his goodbyes and headed off to the police station. Sienna, meanwhile, pleaded for Summer to let her go, but it turned out that Summer had no intention of honouring her part of the bargain.

Sienna, refusing to fall victim to Summer, grabbed a nearby rock and threw it at her nemesis, knocking her out cold! She retrieved the gun and headed back to the village, where she reunited with Brody once more, informing him he needn’t go to the police, as they’re safe.

Brody was in awe of her, as they stood by the entrance to the village, and it appeared as if Sienna was at last going to hear those three little words coming from her soulmate’s mouth.

‘I thought I was going to lose you back there,’ he said. ‘It terrified me. I think it’s about time I tell you something I should have said a long time ago, but from this moment on, I am going to say it to you every single day for the rest of our lives.’

Tragedy struck, however, as a car came speeding into the village at a high-speed velocity, knocking Brody to the ground.

Sienna wailed in terror, before swiftly approaching Brody, who lay in agony in front of her.

‘I love you,’ he uttered through the pain, before dying.

Sienna was heartbroken, as she cradled Brody in her arms, one final time.

And, in typical Hollyoaks fashion, just when you think you know what’s going on, a huge twist knocks your socks off.

You see, in spite of her vendetta, it wasn’t actually Summer that mowed Brody down. It was Warren!

But why?! We can’t give away everything, we’re afraid, so you’ll just have to tune in Thursday and find out for yourself!