“They’re dragging this out. They’re letting everyone else out,” Richard Barnett screams in court 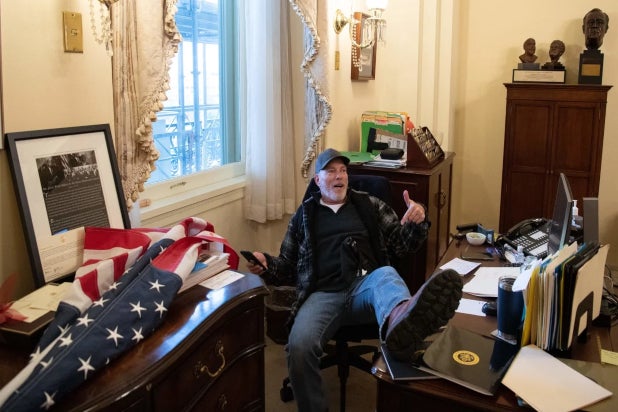 Richard ‘Bigo’ Barnett after breaking into Nancy Pelosi’s office during the Capitol riot.

Richard Barnett, the man who posed for a photo with his feet up on a desk in House Speaker Nancy Pelosi’s office after breaking into the Capitol earlier this year, had a meltdown in court today after he once again failed to be released on bail.

Barnett, a self-described white nationalist who sometimes goes by “Bigo,” is a 60 year-old from Arkansas who admitted to making the drive from his home state to D.C. in order to participate in Trump’s “Stop the Steal” rally that preceded the Jan. 6 riots, and also one of the hundreds of Trump supporters who stormed the Capitol building and broke in attempting to stop Congress from certifying the votes for Joe Biden.

Barnett phoned into his court hearing March 4 from jail and threw a tantrum, seething at the judge and arguing he should be allowed to leave the jail on bond.

“They’re dragging this out. They’re letting everyone else out,” Barnett yelled. He also added, “it’s not fair” that other rioters have been released and are awaiting trial, but he’s still locked up. “Everyone else who did things much worse are already home,” he argued.

“This has been a bunch of crap… They can’t keep pushing me out month by month,” he screamed during the hearing.

Federal prosecutor Neama Rahman told the Daily Beast this week that (contrary to usual protocol, which is to keep accused criminals in jail before trial) some Capitol rioters are being released because they’re not “a flight risk or danger to the community” — but that evidently doesn’t include Barnett.

Ultimately, the outburst in court didn’t work in Barnett’s favor. His next hearing will be May 4 according to counsel Joseph McBride.

A federal judge originally was set to allow Barnett “very restrictive conditions” of pre-trial release, but Chief U.S. District Judge Beryl Howell overruled the verdict and decided to transfer Barnett to a jail in Washington, D.C. instead of allowing him to walk free.

If convicted, Barnett would only receive up to one year in prison.

In now-infamous photographs, Barnett posed gleefully with his feet up on a staffer’s desk in Nancy Pelosi’s office, and also stuck out his tongue as he held up a piece of her mail. Barnett was also seen carrying a stun gun into the Capitol and once he left, he bragged about taking Pelosi’s mail. Barnett also left a note for Pelosi that reportedly read, “Nancy, Bigo was here, you bitch.”

The boasting took on a different tone after Barnett was arrested — he admitted to being there but tried to downplay his actions and said he was pushed inside the Capitol by the crowd. According to the criminal complaint filed against him, Barnett said he didn’t steal Pelosi’s paperwork. “I did not steal it. I bled on it because they were macing me and I couldn’t f—-ng see so I figured I am in her office. I got blood on her office. I put a quarter on her desk even though she ain’t f—-ng worth it,” he said.

Trump shared a doctored video of Pelosi ripping his speech that's been viewed millions of times, and Democrats are outraged Facebook and Twitter still won't remove it

The 10 Nakedest Looks at the MTV Movie & TV Awards