The bakers taking part in the Great Celebrity Bake Off for Stand Up to Cancer were put to work this evening, as a number of celebrities took on the baking challenges. Included in the line up was The One Show’s Alex Jones and singer James Blunt. Alex had had a tough night on TV this evening, as earlier she saw her co-host Matt Baker make his last appearance on the show – but things were about to get more frustrating for her.

During the various Bake Off challenges laid out for the celebrities, the final task asked them to create a biscuit diorama.

Alex decided to create a biscuit travel agent, complete with till and workers.

However, she seemed to struggle with her timekeeping throughout the creative period.

Alex was first shown struggling to mix her biscuit dough, as her counter mixer sent flour flying across her work station. 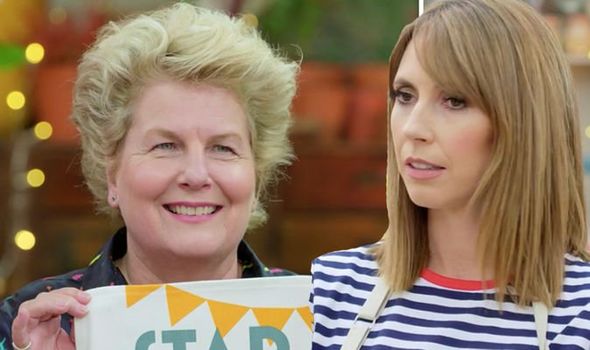 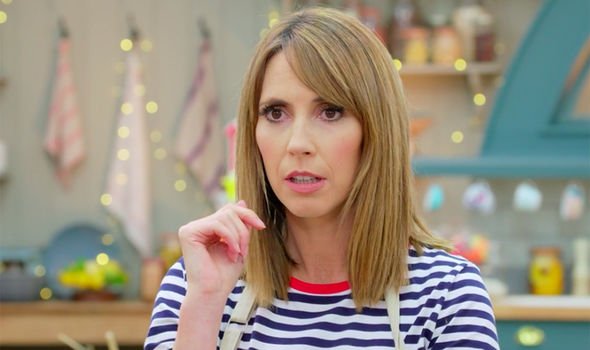 But things were about to get worse for Alex, as Sandi Toksvig announced how long was left in the challenge.

After the usual quip alongside Noel Fielding, Sandi announced: “Bakers, you have one hour! One hour!”

Looking slightly dishevelled in her panic, Alex turned around and muttered: “Oh, shut up.” 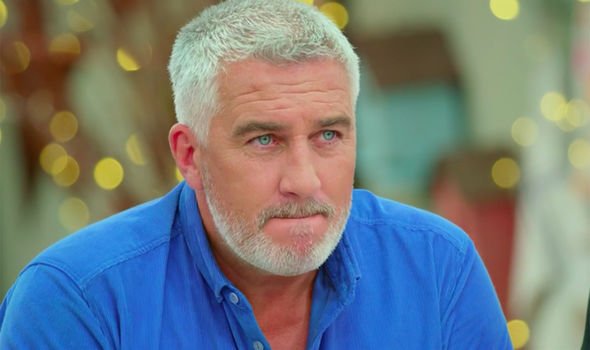 Although Alex did eventually finish her creation, she was not awarded the star baker for the day.

That privilege instead went to Joe Sugg, as judge Paul Hollywood claimed he was the most consistent baker throughout the competition.

It wasn’t the first time Alex became the talk of the tent as earlier in the show she accidentally cut her finger with some glass.

She recently revealed this prompted her brief exit from the show, as she had to seek medical attention.

She explained: “I’m saying, ‘I’m absolutely fine’ before realising there’s a massive shard of glass sticking out of my hand!

“I had to go straight off to the paramedic for stitches.”

She continued her story by adding: “He said, ‘I’m just going to put in the anaesthetic’.

Unfortunately for fans, the new series of the Great British Bake Off could be postponed due to the ongoing coronavirus pandemic.

A Great British Bake Off spokesperson recently told HELLO!: “We are monitoring the situation and Public Health England advice very carefully, and are looking at all options for producing the show safely.

“Filming of the series will begin when it is safe to do so.”

Celeb Bake Off continues Tuesday at 9pm on Channel 4.