Coronation Street will air heartbreaking scenes tonight (July 10) as Kevin Webster tells Jack that his foot has been amputated.

Kevin’s 7-year-old has been fighting for his life over the last few days, after being rushed to hospital and diagnosed with sepsis.

With Jack in a coma, the doctors examined his foot and realised he had ischaemia – a restriction in blood supply to tissues that was spreading.

Kevin was then told that they’ll need to amputate Jack’s foot to keep him alive, leaving him with no choice but to give the go-ahead for the operation. 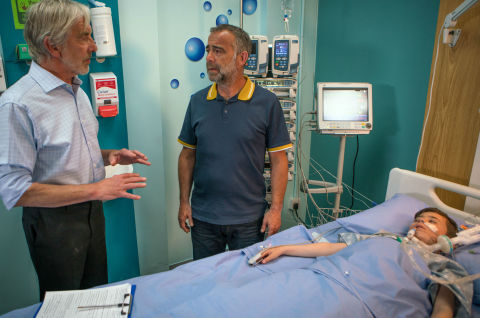 When Jack comes round from the operation in Tuesday’s hour-long episode, Kevin is forced to tell him what’s happened.

Fighting back tears, Kevin tries to explain to Jack that they have had to amputate his foot, but how will the youngster cope with the life-changing news?

Speaking about the storyline, Kyran Bowes – who plays Jack – said: “I made sure I showed the emotions and feelings of shock and upset that Jack and his dad would be going through in a real-life situation.

“I hope I have done the story proud for Coronation Street and for all the people who have suffered sepsis. It is a terrible illness and I hope that this storyline helps others and raises lots of awareness.”

Why The Who’s Roger Daltrey struggled to write his autobiography