Struggling to keep track of the constant stream of soap spoilers? Fear not, as every Monday Digital Spy picks out the biggest and best storylines hitting your screens in the week ahead. 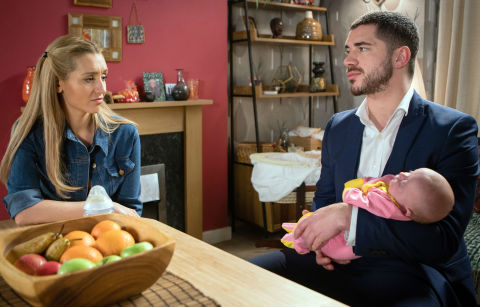 It’s official – Corrie favourite Eva Price will only be staying on our screens for another two weeks. Her exit storyline begins this Friday (July 27) as she decides that she needs a fresh start away from Weatherfield. After all the recent drama surrounding baby Susie, we don’t blame her.

Not only does Eva want to keep her distance from the Connors after last week’s kidnap incident, she also feels that Toyah is too attached to Susie. As a result, Eva shocks her loved ones by heading off without saying goodbye, leaving a note behind revealing her decision.

But don’t worry, as it isn’t the last time we’ll see Eva – it’s been confirmed today that she reappears one last time for Aidan’s inquest on Friday, August 3, providing some final closure before she goes.

2. EastEnders: Tina attacks Stuart (Tuesday at 7.30pm on BBC One) 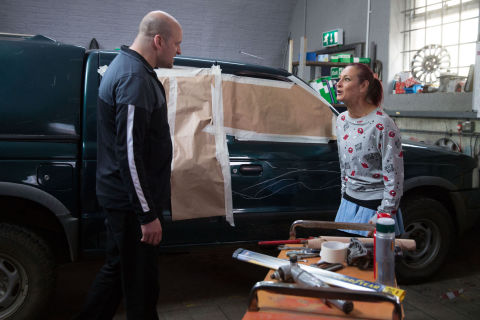 Now we’ve finally established that sly Stuart is guilty as sin, the storyline steps up a gear as Tina snaps in the heat of the moment. Stuart starts the week by trying to trick Tina into thinking that she’s wrong about the disturbing ordeal he put her through all those years ago. When that doesn’t work, he finally shows his true colours by cruelly goading her over the past.

Pushed to breaking point, Tina viciously attacks Stuart and leaves him for dead on the floor of The Arches. When Tina returns to the car workshop with Mick and Linda later, will Stuart be dead or alive? And how much trouble is Tina in when the police arrive to arrest her?

3. Emmerdale: Lachlan struggles with the pressure (Thursday at 7pm and 8pm on ITV) 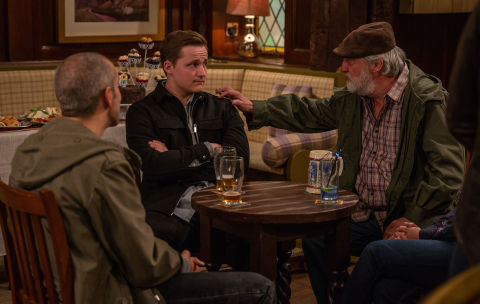 The pressure grows for Emmerdale‘s resident serial killer Lachlan, as everyone starts to wonder what’s really happened to missing Rebecca. Lachlan may have managed to get Liv off his back, but now he needs to worry about nosy Lydia, who wants answers when she finds Rebecca’s memory book stashed away in his car boot.

Robert is also worried about Rebecca going AWOL and decides to search her room for clues on her possible whereabouts. What Robert finds shocks him, but is it game over for Lachlan? Given his habit of talking/killing his way out of every single situation, we doubt it… 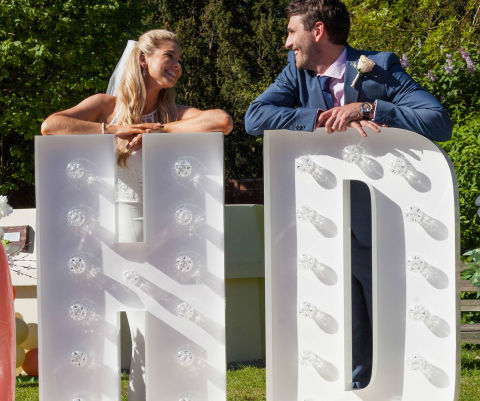 Will Holly and Damon get their happy-ever-after, or are they another of the village’s doomed couples? The latter seems more likely this week when Milo threatens to throw a spanner in the works on the day of their wedding. While it’s no secret that Damon cheated on Holly a few weeks ago, manipulative Milo threatens to reveal that Cindy was the other woman unless she agrees to cut ties with Dirk and her family for good.

Rumour has it that Milo’s scheming will have a highly dramatic outcome, but what does it mean for the happy couple on their big day? 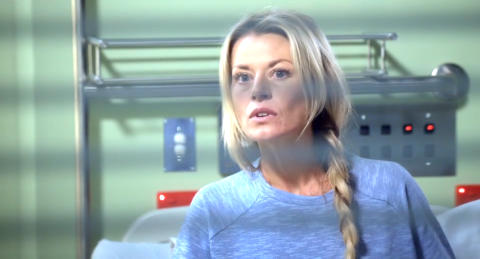 Neighbours is firing on all cylinders at the moment – and a big part of that is Madeleine West’s latest return appearances as… well, your guess is as good as ours. Show bosses are keeping tight-lipped about whether the mystery woman in the psychiatric facility is Dee or Andrea, and it’ll certainly be interesting to see what Toadie thinks when they finally come face-to-face this week.

Toadie is pretty frosty when he sees “Andrea” again, sharing a stern word or two about the small matter of her conning him out of his life savings last year. But when she announces that she’s Dee, not Andrea, could there be some truth in her bizarre claims? Is Dee still alive? Please say yes, Neighbours bosses, as we can’t handle a second Dee disappointment… 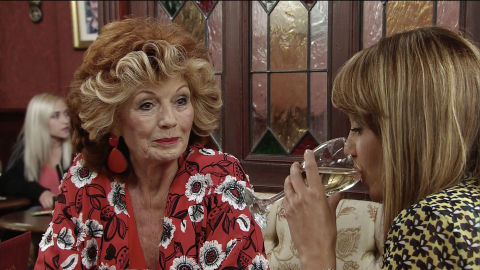 Expect a classic dose of Corrie comedy when Rula Lenska reprises her role as Claudia Colby this week. Last seen in 2011, Claudia heads back to the cobbles to catch up with her frenemy Audrey Roberts – full of boastful updates about how well her salon is doing.

Claudia is now planning to expand her empire by opening up more salons around the area and expanding her workforce, so she asks Maria whether she’d like to run one of them. After her recent run-ins with Audrey, is this Maria’s big chance to strike out on her own?

7. EastEnders: Kat and Hayley bond (Thursday at 7.30pm and Friday at 8pm on BBC One) 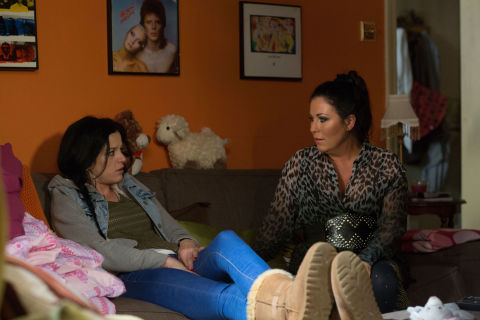 After weeks of bickering, Kat and Hayley finally grow closer this week and it’s all thanks to a cleaning caper. When an overworked Kat faces the tough task of cleaning Ian Beale’s restaurant overnight, she confides in Hayley about how she’s taking on numerous jobs in order to be a better role model for her kids. Clearly touched, Hayley agrees to help Kat with her latest assignment, even though it means going without sleep for the night.

The two Slaters reach an understanding after spending the quality time together, but with Hayley still hiding the bombshell secret that she’s expecting Alfie’s baby, we’re pretty sure this truce will be short-lived. 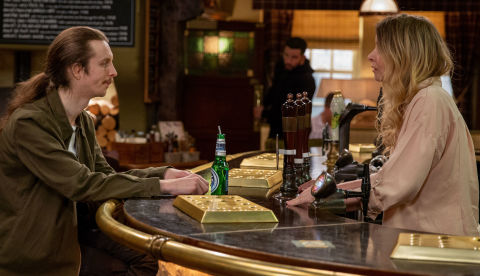 Charity’s son Ryan returns to the village on Tuesday, but their reunion doesn’t go according to plan. Not wanting to be a secret, Ryan is hurt when he realises that Charity still hasn’t told the rest of her family about him.

Annoyed with Charity, Ryan ends up forming an unexpected bond with Ross, who invites him over to the Barton house for some drinks. Ross even offers to set Ryan up with someone in the village, but it’s not long before his meddling leaves Charity in a sticky situation… 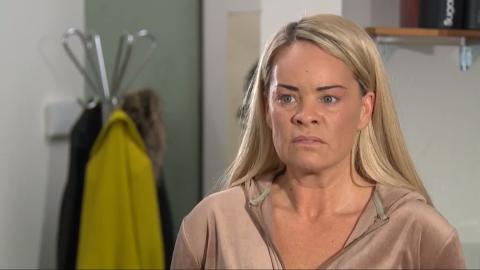 Thinking she’s free from Glenn’s clutches, Grace continues to focus on her new love interest Farrah – even sending her a hot selfie in a bid to tempt her away from Kim for the day. What Grace doesn’t realise is that Zack is monitoring her every move, having agreed to become Glenn’s reluctant spy.

When Grace sneaks off with Farrah, it’s just as Glenn is putting more pressure on Zack to get results with his snooping – even threatening Holly’s safety. Is it only a matter of time before Zack finds out about Grace’s new fling and passes the gossip straight onto Glenn? 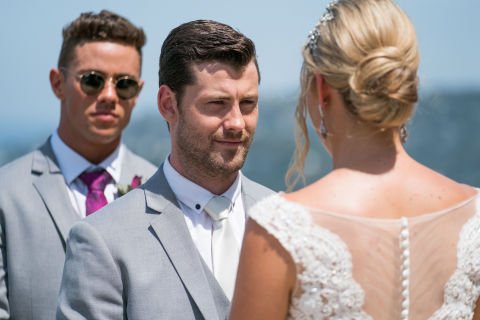 Summer Bay comes together to celebrate Brody and Ziggy’s wedding and it’s a joyous occasion for all concerned. Despite some last-minute nerves, Ziggy turns up for the ceremony as planned and the celebrations give the Astoni family a much-needed distraction from Maggie’s illness.

Sadly, just as Brody and Ziggy head off on honeymoon, it’s clear that Maggie has been hiding just how unwell she’s been feeling all day. Once the happy couple are out of sight, Maggie suddenly collapses. Will she be okay?

Why Fans Want Patrick Dempsey to Make an Appearance on 'Euphoria'

The Pope condemns anti-lockdown protesters and calls for change