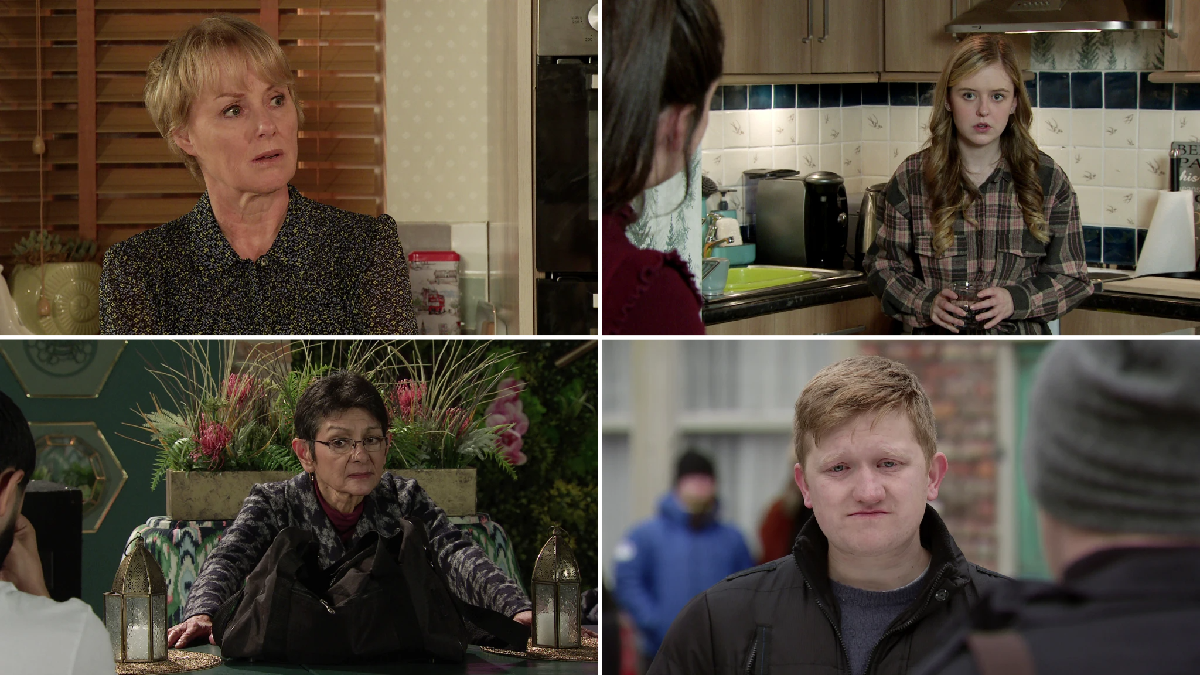 It’s another dramatic week in Coronation Street and it’s torment all round for our favourite characters. Tim Metcalfe (Joe Duttine) is hiding a devastating health secret from wife Sally (Sally Dynevor) – and he fears for his life. Meanwhile, an assault on Summer Spellman (Harriet Bibby) pushes Amy Barlow (Elle Mulvaney) into action.

Chesney Brown (Sam Aston) and Gemma Winter (Dolly-Rose Campbell) are thrust into a crisis too when Joseph goes missing.

Gemma gets Aled ready for his appointment with the audiologist. Joseph reminds Chesney he needs money for the school trip and a new school jumper.

When Joseph confides in Hope that they’ve no money to pay for the school trip, Hope hands him Fiz’s purse and tells him to help himself. As Joseph eyes the cash, will he steal it?

A dishevelled Tim returns home after spending the night in the cab office and assures Sally he has not gone off her, he just had a stressful day. At Aggie’s insistence, Tim returns to see the cardiologist who explains the operation in detail and confirms that he’ll receive a letter with a date. Tim’s scared witless.

Craig returns from his run with a sprained ankle. To Faye’s horror, Tyrone lends him Ted’s crutch.

Alya tells Ryan that she is worried Zeedan will end up telling Marrium the truth about her dad’s death.

Zeedan and Ryan decide to buy a new dishwasher from a mate of Bernie’s with Hashim’s dirty cash.

A concerned Yasmeen offers Stu a full time job at Speed Daal and a roof over his head, but she makes a shocking discovery when clearing out the room for him.

Gemma and Chesney are shocked to learn that Joseph is being bullied at school because they can’t afford to buy him things. Fiz suggests that Chesney needs to start focusing on Joseph.

As Tim tries to pluck up the courage to tell Sally about his heart operation, he’s thwarted when Sally reveals Sophie has broken her wrist in a moped accident in Crete.

As Faye helps Craig into the flat, Emma is horrified to see that he’s using Ted’s crutch. As Craig studies the initials on the crutch, Emma and Faye share worried looks.

Summer reveals that she’s had a conditional offer from Oxford University.

Alya convinces Zeedan that it’s time they told their gran the truth. As Alya explains how Hashim forced Zeedan to launder his dirty cash through the Speed Daal books, Yasmeen’s shocked and angry in equal measure.

Yasmeen is even angrier when she realises that Zeedan had a hand in the fire that almost killed Stu. At the restaurant launch, Yasmeen makes a speech about family values and respect, but what will she do about their confession?

When Sally suggests a dip in the hot tub, Tim makes excuses and Sally’s hurt. When Jenny lets slip that Tim bought a huge bunch of flowers earlier, Sally’s pleased.

When Brian and Cathy reveal that they’re booking a holiday, Jenny urges them to book some cover, convinced Rita won’t be able to cope on her own.

Chesney quizzes Joseph about the bullies at school and offers to speak to his teacher. But Joseph gets upset, adamant that would only make matters worse. When Chesney goes behind Joseph’s back, an angry Joseph is furious with his dad for breaking his promise and reporting the bullies.

Chesney feels awful and heads out to the backyard to apologise to Joseph, only to discover him missing. After a fruitless search, Chesney returns home and reveals Joseph has run away. Gemma calls the police.

Marrium discovers that Yasmeen has disowned Alya and Zeedan and demands to know what is going on.

Aadi urges Amy to bury the hatchet with Summer as they used to get on so well. Summer returns home with a bag of junk food, but suddenly she’s startled when Amy appears. Summer quickly hides the food, hoping Amy didn’t notice it.

Tim calls at Number 3 and with flowers for Aggie and thanks her for all her support. When Tim returns home without any flowers and heads straight to bed, Sally’s convinced he’s hiding something.

Chesney and Gemma report Joseph missing to the police. As the officer heads out, Chesney fears for Joseph’s safety and scours the streets for his son.

When Gemma comes out of Number 5 and reveals that the police have found Joseph’s jumper. Chesney feels sick. When Hope wonders what’s going on, Fiz explains that Joseph’s missing.

When Zeedan refuses to be drawn, Marrium takes offence and asserts that if he can’t be honest with her, they should call it a day. When Zeedan tells Alya that it’s time he told Marrium the truth about the money laundering or he’ll lose her for good, Alya warns him that he’s in danger of losing his family instead. What will he do?

Having clocked the sweets, Amy assures Summer it’s up to her what she eats. A guilty Summer makes out they’re not for her. Summer returns home and takes out her stash of sweets, loading them into her school bag.

Brian explains to Rita that he and Cathy are off to Cornwall tomorrow but he has arranged for Shona to help out in the Kabin. As Rita talks Shona through her duties, Shona assures her she won’t let her down.

After a fruitless night searching for Joseph, Chesney is at his wits’ end. Dev offers to set up a fundraising appeal so he can offer a reward for information.

Fiz orders Hope to tidy her room and explains that someone is coming to value the house. Hope watches from her bedroom window as a tearful Chesney and Gemma make a public appeal for the safe return of Joseph. At the same time, a forlorn Joseph wanders the streets carrying a holdall and a rolled up tent.

A strung-out Chesney admits to Gemma that he fears he’ll never see his son again.

Evelyn’s horrified to realise Hope has slipped out while her back was turned. Having called Tyrone and ascertained that Hope isn’t with him, Fiz is beside herself.

Summer and Amy head out of the hospital after Summer’s diabetes appointment. Jacob approaches with his arm in a sling. Jacob assures them that he no longer has anything to do with the drugs gang. Amy orders him to stay away

In Victoria Garden, Amy and Summer are disgusted to find Max looking at an upskirting photo on his phone. Summer’s horrified to realise it’s a photo of her.

Amy and Asha urge Summer to report the upskirting photo to the police, but Summer’s too embarrassed. Amy tears a strip off Max for looking at upskirting pictures and tells him she intends to find out who’s taking the photos and make sure they’re punished.

In the flat, Summer stuffs herself with chocolate and then heads to the bathroom where she makes herself sick.

Sally casts her eye over Maria’s election pamphlet, she’s furious to realise Tim must have let slip about County’s new training ground plans. In the Rovers, Tim confides in Peter that he’s awaiting a triple bypass operation but can’t bring himself to tell Sally. Tim swears Peter to secrecy, leaving him deeply concerned.

Tim returns home and as he takes off his coat, he knocks their wedding photo off the sideboard, smashing it to smithereens.

Later, in The Rovers, Sally and Maria row over County’s plans for the new training ground.

When Zeedan suggests they use Hashim’s dirty money to pay for somewhere else to live, Alya reckons it’s a terrible idea. Bernie calls at Speed Daal with a collection box for Joseph’s appeal. Yasmeen eyes the box thoughtfully.

When Ryan reveals that someone has made an anonymous donation of £30k to Joseph’s reward fund, Zeedan and Alya suspect their gran of giving away Hashim’s cash.

This Flowy Tie-Front Tee Has 6,000 Perfect Ratings on Amazon — and It's Half-Off Now