Note: This article contains discussion of suicide, which some readers may find upsetting.

The actor plays Johnny Connor in the ITV soap, who will find a suicide note and the body of his son Aidan Conner (Shayne Ward) after he tragically takes his own life in tonight’s (May 9) hour long special. 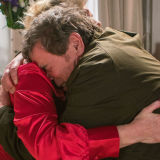 In a recent interview, Richard revealed his performance will pay tribute to men he knows who have dealt with similar suicides in real life, including father Dan Bridge who lost his teenage son Flyn.

“Through my own life I do have connections with the story and stories such as these,” Richard told The Mirror.

“I have a friend who I tried to honour through this performance. He went through a very similar story to this. But it is wider than that, this stuff is going on and on a repeated level.

“I have just got a sense of mission and wanted to do it well to honour the families of the fallen. I wanted us to do what we can to make a seismic change in our culture.

What to Pack for Your Spring Break Adventures, No Matter Where You're Headed

Kanye WILL make the ballot in Oklahoma after paying $35,000 to qualify

Minister quizzed over fate of PM's ex-aide after Partygate boast