Coronation Street star Victoria Ekanoye is not happy with her character Angie Appleton for cheating on Jude.

Angie turned to Adam for support in Wednesday’s episode (May 2) after discovering that her husband Jude had been lying to her about his career.

Jude has spent the last few years pretending to be a marine biologist, when in reality he actually works in the gift shop at the marine life centre.

After learning the truth, Angie headed over to the solicitor’s office for some time out, where she found herself pouring her heart out to Adam over a few drinks. 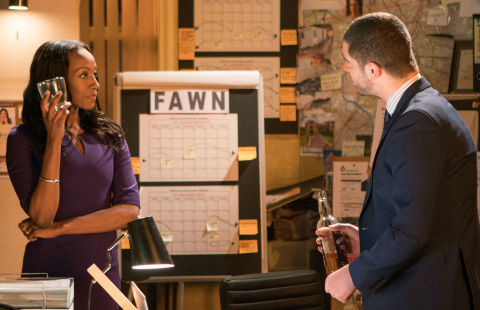 With emotions running high, Angie ended up leaning in for a kiss – only to be rebuffed by Adam, who reminded her of her loyalty to Jude.

Speaking about the story twist on Twitter after the episode, Victoria didn’t hold back as she made her feelings known.

She said: “Ohhh Angie I mean don’t get me wrong, Jude’s been a right tit. Lying to your wife…for 2 whole years?!? But, I just feel really bad for him #Corrie #TheAppletons”

Fans will have to wait and see whether Jude and Angie can repair their marriage in the wake of this latest drama, or if it’s over for good between the couple.

Yanny or Laurel? A psychologist settles the debate once and for all