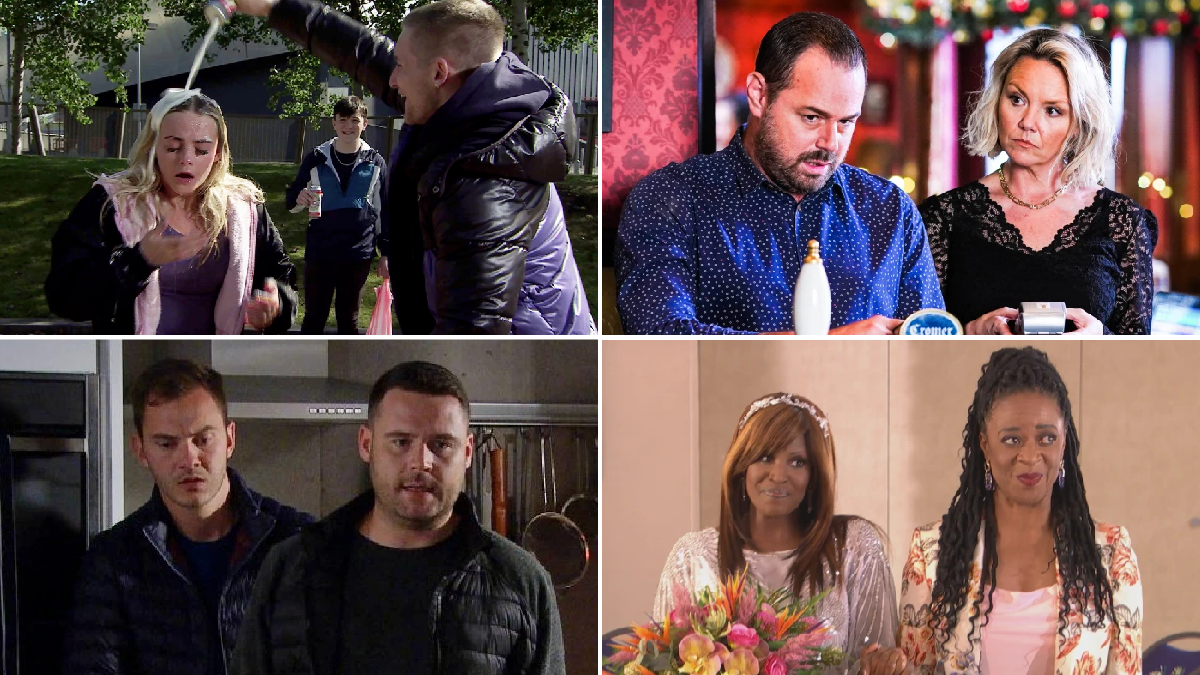 With a wedding, a potential murder and the theft of a Christmas tree all on offer, it’s safe to say that next week will be one the residents of soapland won’t forget in a hurry!

Kelly Neelan is targeted by a group of teens in Coronation Street, who proceed to pour beer over her, leaving Nina Lucas with quite the dilemma.

Will she save her?

EastEnders sees Janine Butcher attempt to put a smile on Mick Carter’s face, while Emmerdale’s Ben Tucker stumbles upon a video that could have deadly consequences!

Martine Deveraux walks down the aisle in Hollyoaks, but will she tie the knot with Felix Westwood?

We certainly hope so!

It’s set to be quite the week, that’s for sure, and if you simply cannot wait to see all the drama and action unfold, then check out our huge guide below, packed with all the biggest moments to come!

1. Roy is heartbroken to discover that the gun Abi used to try and kill Corey is the same one that was used in Natasha’s murder. DS Abney asks him some more questions, and yet again, he keeps shtum. But the cafe owner informs Abi that he’s had to lie, and later tells Nina that they must accept responsibility for their role in Natasha’s death. And with that, he signs over his flat and business to Nina with immediate effect, and puts the Woody up for sale. Nina is concerned that her uncle is planning to take his own life. Roy, however, reveals that he is leaving Weatherfield. For good.

2. Stu attempts to look out for Kelly, but she wants to be on her own. She’s terrified and lonely, however, and refuses drugs when someone attempts to sell them to her. Stu, meanwhile, begs Nina to give Kelly a break – but she refuses. Later, he finds Kelly semi-conscious, realising that she’s been smoking spice. Kelly staggers off, and is confronted by some drunk kids who follow her, before circling her. Nina approaches, as the teens intimidate Kelly. Will she assist Kelly?

3. George gives his old telescope to Sam, leaving the him smiling. He sets up said telescope, while Nick worries about the memory note he’s read, in which Sam revealed that he wished his last words to his mum were different. Later in the week, Sam sends George a note, asking him to come over for some stargazing. George makes Sam giggle, leaving Nick feeling jealous.

4. Faye returns home from prison to find everyone happy, but she reminds them she’s only out on bail, before storming off. She later returns, and apologises for overreaction. Soon enough, she starts back at the bistro, but realises she cannot work there, as it brings back such terrible memories for her. Tim suggests she could take over Alina’s old role at the factory, and Sarah thinks it’s a good idea!

5. Summer, Asha and Aadi confront Max in the wake of his video, demanding that he remove it. David, meanwhile, is angry with his son when he discovers he did not show up for school yet again. Therefore, he orders that Max apologises. Max, however, refuses, but he later confides in Daniel about how he wishes he could put everything right.

6. Sally calls Maria and Mary together for a meeting about the Christmas Market.  When Maria reveals that a local councillor has resigned, Mary points out that she and Sally will be locking horns sooner than expected.

7. Daisy receives some children’s clothes and explains to Jenny that the company saw her pictures of Bertie and assumed she’s an influencer. Daisy presents Daniel with the designer clothes for Bertie, but later confesses to Daniel that they were freebies, leaving him disappointed.

8. Rocky faces court over keying Ethan’s car, and soon enough, he decides it’s high-time to leave Walford. Kathy unknowingly interrupts his exit, asking him to help her out at the restaurant. Rocky stopping by Walford East, but finds the place empty – it’s a surprise party for his 60th birthday! He’s touched, but fed up of lying, he writes a letter to Sonia and Kathy, explaining his crimes. But a tragic turn of events sees him grab at his chest in agony, and he ultimately collapses to the floor.

9. Janine devises a plan to put a smile on Mick’s face, as she sets out to win the sponsorship of the Christmas tree, much to the dismay of Peter. Team Queen Vic successfully outbid Peter at first, but Peter later gets the upper hand, and his arrogance infuriates Mick. As a result, he tells Janine to do her worst!

10. Sharon tells Phil that Alyssa is Dennis’ child, and she reveals she’s applying for joint custody of the baby. Phil, however, doesn’t trust Jada, and he relays his suspicions to Kat. He later questions Jada, demanding to know why she left Alyssa on a doorstep. The stalwart then orders Jada to walk away again, but little does he know that Sharon has entered – and she’s heard everything!

11. Chelsea attempt to set the date for her and Gray’s wedding. Denise, meanwhile, becomes hellbent on putting a stop to the wedding, and even pays Gray a visit. But things become somewhat complicated when it’s revealed that both Chelsea and Denise have booked their weddings for Christmas Day! Denise claims Chelsea is rushing things and soon even Gray is having doubts.

12. Sandy shows up at Ruby’s club, much to Dotty’s relief. She tells her mum that she has been saving up for rehab for her during her absence, and soon offers her a place to stay. Dotty instructs her uncle Tom – aka Rocky – to scam Peter for more money, after he successfully got £3,000 out of him earlier this month.

13. Janine opens up to Mick about a memory of her dad, and Mick offers her some words of kindness that really move her.

14. Vinny offers Dotty and Sandy a bedsit which the Panesars own but Sandy will only stay there on one condition. Dotty, meanwhile, thanks Vinny for being such a good mate, but it is clear there are more feelings lingering for Vinny.

15. Liv sabotages Ben’s chances of a job in Cornwall, leaving Aaron appalled. She subsequently relapses, taking a drink from a bottle of vodka. Aaron and Ben, meanwhile, plan their future and share a kiss, but they’re stunned to find out that Liv has started drinking again. Aaron declares he’s done with her.

16. Ben is fired up over being blamed for the survival challenge disaster, and thus he breaks into HOP to find some evidence, and he stumbles upon the body cam footage. He’s horrified, as he sees Meena attempting to drown Victoria! He calls Billy, urging him to come to the HOP, but little does he know that Billy is with Meena, who overhears the mention of potentially incriminating evidence.

17. Ben hears a noise at HOP, and it turns out to be Liv, who’s smashed bottles, stealing booze from the Hide. Little do they know, however, they’re being watched by another intruder. Meena reveals herself to Ben, much to his shock. She lunges to grab the camera, but Ben makes off with it. Meena gives chase, but slips in the wine that was spilled earlier, ending up unconscious on the floor.

18. Al and Chas become closer, and Marlon walks in on what appears to have been a particularly romantic moment between the two. He relays his discovery to Cain, who takes matters into his own hands, kidnapping Al to teach him a lesson! He intimidates Al in a barn, pretending to hold a gun to his chest. Will Chas be able to stop him before he goes too far?

19. Cain tries to get back into Liam’s good books.

20. A conversation with Billy leaves Ben fired up about taking all the blame for the survival challenge.

21. Martine and Felix set a date for their wedding, but a mystery postcard soon sends Felix and Toby into panic. Pre-wedding celebrations are later ruined, as Toby and Celeste get a warning that someone is on to them about Lisa! Martine and Felix, meanwhile, walk down the aisle, as the day of their wedding arrives. But with huge secrets set to be uncovered, what will transpire?

22. Nate is on a mission find out all he can on Lisa’s whereabouts, and thus with Martine out, he attempts to use DeMarcus’ key to gain entry to the flat. Grace Black, however, catches him in the act! Nate comes clean about everything, rendering Grace speechless, as she cuts all ties with him over the lies he’s told. Grace, growing suspicious about Martine’s kids behaviour, soon teams up with Nate to set a trap for the Deveraux family – and it’s one that someone walks right into!

23. Warren is unsettled by Fergus’ visit to see him, and he does everything he can to protect his family from prison. Fergus, however, plots his former pal’s demise. But the team to destroy Fergus grows in size as the stakes heighten, and there is a warning from Warren, leaving Maxine having to make a deadly decision. Subsequent scenes will see a major fumble ensue, and Max faces prison time as a result. That is, until an unexpected ally comes to her rescue!

25. Sienna undergoes some trials with Ste for a job, but will she be the right fit for Ste’s Klean?

Ramping it up! French daredevil rides motorbike off a 558ft cliff