Countryfile: Adam Henson says he needs to replace his boar

Countryfile kicked off BBC One’s Sunday evening’s entertainment and Anita Rani was touring of one of London’s cemeteries and she discovered a trove of treasures right on her doorstep. Tom Heap, on the other hand, was investigating the controversial decision which allows UK farmers to use a banned pesticide on their fields. Meanwhile, Adam Henson was showing viewers how a super-meal is specially conceited for his animals during the winters months and those watching at home were surprised by the ingredients used.

“Most of our livestock are indoors back at the sheds,” Adam began explaining. “We bought a lot of the animals into the sheds in November and December time, really to keep them warm and dry and give them easy access to food and to stop them trashing the fields and turning them into a mud bath!

“You can see they all look very content in there now. But with around 60 cows and 500-odd sheep to feed, that puts a lot of pressure on the farm to give them all the food and bedding all winter, and so we feed well over 100 tonnes of grub to these animals.

“There’s a lot of work,” the farmer added.

Adam then introduces a “handy green contraception” which helped him feed his animals, quickly. 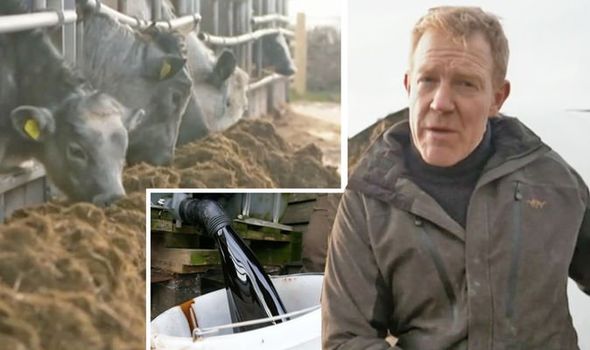 “So we can feel all these animals efficiently over the winter, we have a feed wagon, and Luke here is operating it today,” he told those watching at home.

“And what it is, is a great big mixer, and in here we put some straw, some silage, minerals, beans, barely, and then it’s all mixed up in there like a great big cake mixer,  and then it shoots out the side, feed them all and they help themselves!”

He went onto say how the mixture is “nutritionally balanced to give the 200 or so animals exactly what they need”.

Adam used the scoop of a loader to pour all the ingredients in before it was then put int the mixer.

“Our first ingredient are molasses – this is like a sugary syrup, it’s made from sugar beet,” Adam said while turning on the tap to pour it into a smaller bucker, before tipping it into the scoop.

“This molasses is full of energy for them,” he added. “The next ingredient is beans.

“This is a source of protein and rather than using imported soya, we use home-grown British beans.

“They’ve all been ground up and that goes on top of the molasses. Now he’s [Luke] going to tip that into the feed.”

Those watching at home were surprised by the choice of ingredients used to make the animals’ food and took to Twitter to comment.

One said: “Molasses & beans!! #Countryfile,” while another wrote: “The contents of most cereal bars then?!”

A fourth commented: “Ooh it’s like master chef but for animals #countryfile.”

Countryfile airs Sunday nights at 6pm on BBC One.

There are dinosaurs on a new 50p coin