Dave has confirmed that it’s bringing back two popular comedies from its original programming line-up for another series, as both Zapped and Porters have been renewed.

Zapped stars The Inbetweeners favourite James Buckley as Brian Weaver, an office worker from the real world but who gets trapped in Munty, a town in the fantasy world.

The show will be returning for its third series, following on from the season two finale cliffhanger that saw Brian left in chains while the wizard Howell (Paul Kaye) was sent to Earth by mistake.

Meanwhile, Porters will be back for a full run after premiering a three-part pilot series last year – and with special appearances from Gavin and Stacey‘s Mat Horne and actual Kelsey Grammer, no pressure Porters, but we’re expecting huge things.

The series follows wannabe doctor Simon (Ed Easton) who, on the first day of his new job, is taken under the wing of Karma-loving, German born Tillman (Rutger Hauer) and black-market-Chinese-Viagra-selling Frankie (Susan Wokoma), and tracks his first few months as a porter at St Etheldreda’s hospital as he comes into contact with eccentric staff and patients alike. 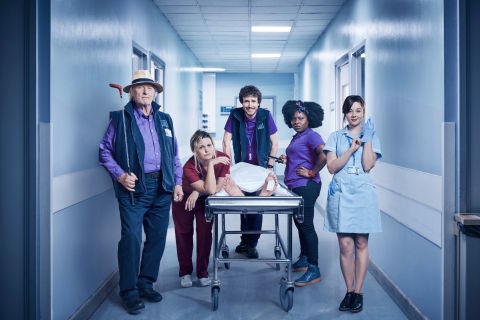 “Zapped has now established itself as one of Dave‘s most popular programmes, and I’m absolutely delighted to be returning to Munty for another series of dazzling comic invention, care of the creative heavyweights at Black Dog and Baby Cow, complemented by our incredibly talented cast,” UKTV’s senior commissioning editor Pete Thornton said in a statement.

“At the same time it’s really exciting to be able to confirm the return of Porters for a full series. The first three episodes set out the show’s credentials as a highly original comic creation and we’re very much looking forward to witnessing the cast’s further adventures via the fertile imagination of one of the UK’s most successful and prolific writers of recent years.”

And, despite being busy taking Alan Partridge on another adventure in a new BBC series, Steve Coogan, executive producer of Zapped, is also pretty excited by the announcement.

“I can’t wait to pull up a chair in The Jug And The Other Jug, pour myself a Ginger Steamer and maybe risk a slice of Herman’s legendary fish pie as I rejoin my favourite Muntyites,” he declared.

Errr, what he said.

Billie Eilish To Join New Podcast About History Of ‘The Office’

No, it’s not ‘fascism’ to protect federal property from riots, revolutionaries

In HBO's 'After Truth,' the Victims of Disinformation Campaigns Humanize the Danger of 'Fake News'