As recently as last July Robert Kirkman, co-creator of the comic books on which The Walking Dead and Fear The Walking Dead are based, told fans of the TV franchises they shouldn't hold their breath for a crossover.

"Right now the timelines are so different that it's impossible," he said.

Jenna Elfman as Naomi in season four of Fear the Walking Dead.

But fast forward eight months and a crossover is precisely what we have got as Morgan Jones (Lennie James) walked (and drove) out of season eight of The Walking Dead and into season four of Fear.

Of all the characters who could have made the move, says Australian director John Polson, who was at the helm of the Fear season opener, the guilt-plagued Morgan was perhaps the most inspired choice. 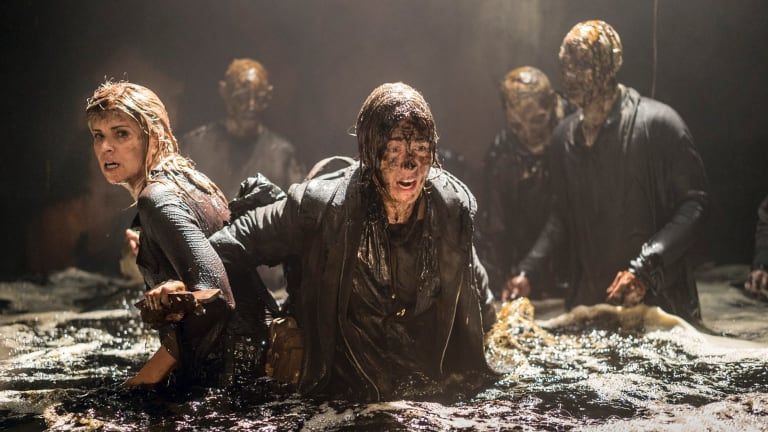 Elfman, with Kim Dickens, says her first walker kill was a steep, and oily, learning curve.

"The fans absolutely love him," Polson told The Age from New York this week. "He was the perfect choice for the bridge between the two."

Polson says he was "incredibly honoured to be asked to direct the premiere, especially given the significance of the moment. And it wasn't just about the crossover – it was also about the whole reset on Fear".

The show has moved from California to Texas, where Madison Clark (Kim Dickens) and her kids have fetched up after being swept downstream at the end of season three. They're farming inside a baseball stadium, and they've been there long enough to have made a decent stab at self-sufficiency (and given this season of TWD took place over a matter of days, or perhaps weeks, that probably explains how the two shows' timelines have been synchronised).

"It was exciting to basically be part of reinventing the wheel on the show and everything that's gone before, including introducing these wonderful new characters," says Polson. 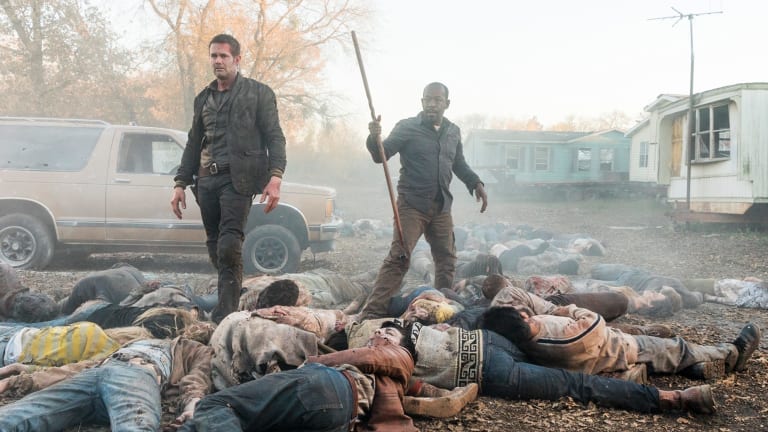 Despite the transplanting of Morgan, Fear isn't in any danger of losing its sense of being a female-driven show. By the end of the first episode, Morgan had been rescued by a female video journalist (Maggie Grace) and captured by Madison's daughter Alicia (Alycia Debnam-Carey).

In episode two, another strong female character enters the landscape of Fear, as Jenna Elfman joins the cast as Naomi, the sole survivor of a small colony at an oil refinery. 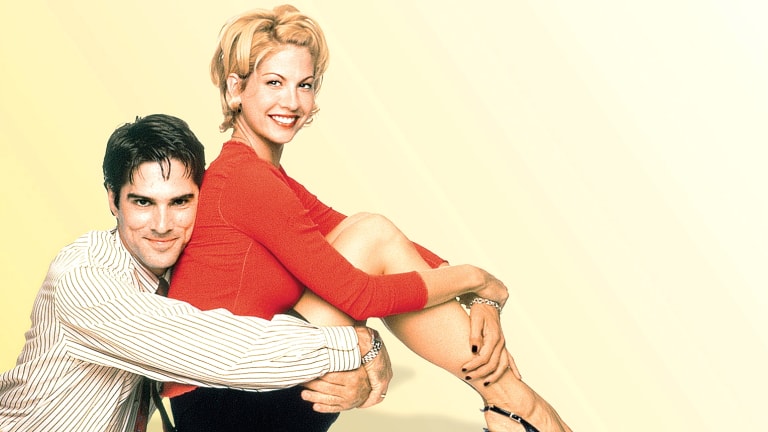 Elfman and co-star Thomas Gibson in a 1998 promo shot for Dharma & Greg.

For Elfman, best known for her starring role on the late-'90s sitcom Dharma & Greg, the role represents a major change of direction.

"I'd been wanting to delve more deeply into the human condition in storytelling," she says. "I've lived a lot of life, I'm raising children, I'm not a girl now, I'm a woman, and I wanted to have a chance to stay in those scenes, experience more dynamic emotions."

Elfman has had a string of sitcoms since Dharma & Greg ended in 2002, all of which have been cancelled after a single season. Does the shift to drama mean she's done with comedy?

"Never permanently," she says. "It's not that I have any problem with comedy. I love it, I think it's important for the world, and I loved doing it. But if anybody does one kind of job too long, you want more experiences. That's really all it was – wanting to enrich myself creatively."

Elfman had seen only a little of the Dead universe before she was offered the role, whereupon she binge-watched both series. It was an experience she found traumatic until, she says, she discovered a little trick. "The second I started getting scared or stressed out I would put it on mute. If you take away the sound and music, it's not scary any more."

That doesn't mean she is unaffected by it though. "I cried watching this season of The Walking Dead," she confesses. "When Rick read [dead son] Carl's letter, I was at the dermatologist about to get a facial. I was watching it in the waiting room on my iPad, crying like a complete moron."

Coming into a show that's three seasons in poses its challenges, she admits, but top of the list was learning how to kill a walker.

"That was overwhelming," she says. "All the other actors who've been doing it for three seasons, they do walker kills with their eyes closed. But when you've never done it before, there's a huge learning curve."

To make things worse, her initiation (in episode two) takes place in an oil tank. "I've got the backpack on, the boots, the coat, and I had a wetsuit on underneath. Everything's so heavy. And then there's the choreography of the fight. It was so slippery, trying to get purchase to stab them in the head, stab them in the neck. It was pleasantly overwhelming, but a lot to learn in a short time."

That first kill behind her, Elfman is looking forward to exploring her character, a damaged woman who is reluctant to join Madison's group for reasons that will gradually become clear.

Having time to probe a character is very different to the world of sitcom, where a character is simply presented and only rarely develops over time. "It's like a kid in a candy store. There's so much opportunity to explore, to dodge and weave and morph and lean into these emotions."

And how long, exactly, do you think you might have to explore Naomi?

"Oh I can't answer that," she says, laughing. "But thanks for asking."

WHAT Fear the Walking Dead

WHEN Showcase, from Monday, 1.30pm

Listen: Julia Roberts and Sam Esmail of ‘Homecoming’ on Their Instant Chemistry

I make £3k a month flogging clothes from my garage, I buy and sell it all on eBay and here’s how YOU can make a mint too

Friends co-creator reveals whether Ross & Rachel are still together