On the screen St Patrick's Cathedral is empty as Paul Keating walks towards the pulpit. Sunlight filters through the lofty window panes as Australia's 24th Prime Minister moves with steady, deliberate strides towards a moment in history. The camera picks him out from various angles, but when it cuts to a shot from behind and above you can also see a Steadicam crew in front of Keating, retreating as he inexorably advances. The high drama crucially comes with self-awareness.

The sequence, which occurs at the start of the compelling new Australian documentary The Eulogy, reveals how in 2016 Keating agreed to deliver again for director Janine Hosking the remarkable but unrecorded tribute he gave at the 2009 funeral of his friend, classical pianist Geoffrey Tozer. Keating's delivery of the eulogy – a celebration of the man, a condemnation of those who neglected his career – doesn't recreate the original event, it launches something new: a framework, an investigation, an understanding. 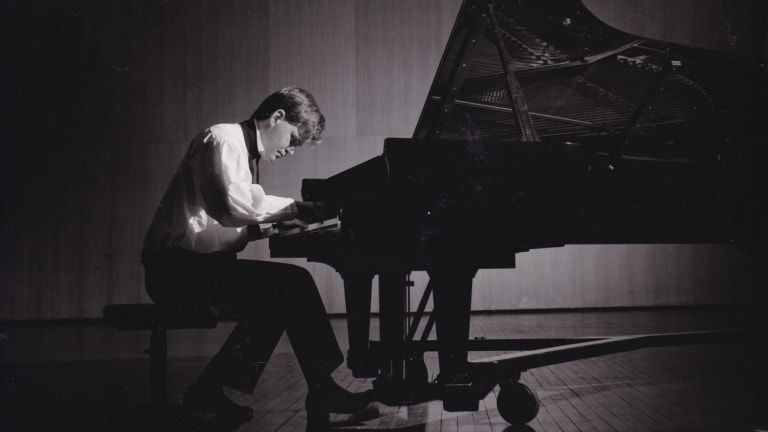 Both The Eulogy and Thomas M. Wright's drama Acute Misfortune, a startling, unique vision of the final years in the life of controversial visual artist Adam Cullen, are Australian feature films that find unexpected and compelling ways of telling real life stories. The two movies, which both have their world premieres at this year's Melbourne International Film Festival, are posthumous documents of creative figures that often refuse to conform to the conventional.

"Biographical cinema is probably the lowest form of art there is, especially in the arrogance it has of replacing the image of people. I really didn't want to engage in that," says Wright, sitting outside a North Fitzroy cafe on a recent wintry morning. "I hope there's room enough in the film for people to bring their own perceptions and opinions and judgments." 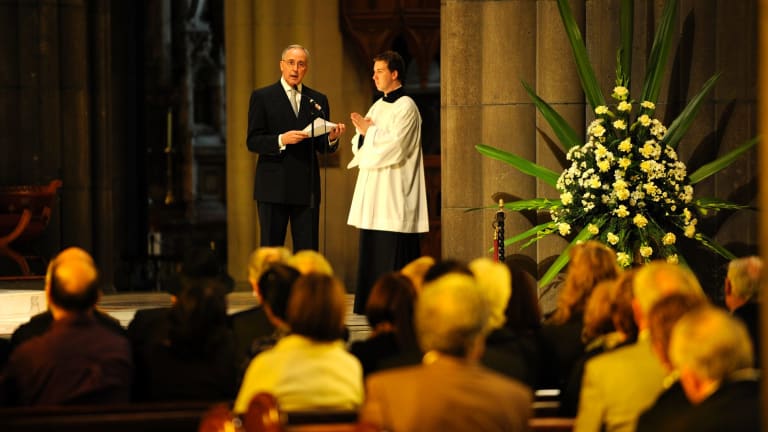 "In recent years the documentary form has changed and evolved. You can mix up the form a lot more now to get closer to the truth," notes Hosking, speaking from her home in the Sydney suburb of Enmore.

Wright is an acclaimed playwright, theatre director, and stage and screen actor making his debut as a feature film director, while Hosking is a former print and television reporter who has been making documentaries since 2001. Both, however, distinctively point the way forward. Their narratives, and the methods they deploy to arrange them, don't filter a complex identity down into something simpler. Instead they add new layers and commentary, and they're willing to make that process part of the viewer's experience.

When Wright first read an excerpt from Acute Misfortune: The Life and Death of Adam Cullen, journalist and editor Erik Jensen's 2014 biography of the artist, who died in 2012 from complications due to liver failure at the age of 46, he couldn't understand why someone would write about Cullen. Jensen, who spent four year in Cullen's erratic orbit as his biographer, defined with serrated precision his subject's work, lies, addictions, and self-serving philosophy.

Wright, who had co-founded the innovative theatre company Black Lung at the age of 23 in 2006, had been intent on making feature films for several years. Jane Campion and Garth Davis, his directors on the former's 2013 television series Top of the Lake, where Wright starred opposite Elisabeth Moss, told him he would have to write something. When he fastened onto adapting Acute Misfortune, with Jensen as his co-writer, he placed the book under sharp scrutiny. 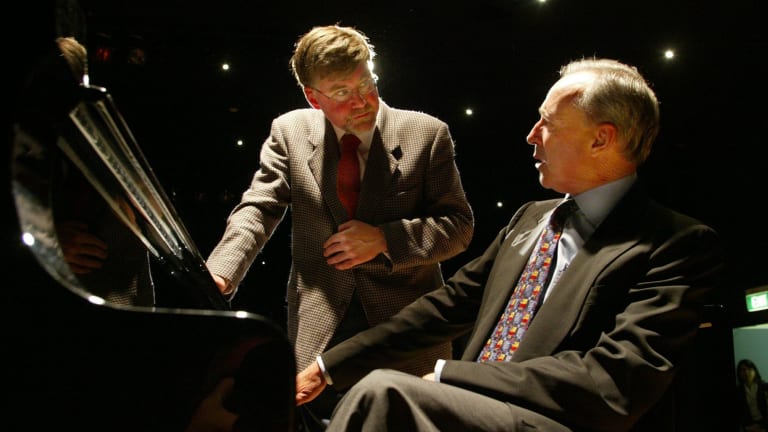 Geoffrey Tozer and Paul Keating at the Australian Institute of Music.

"I said to Erik in the first few days of adapting it that if we just repeat the conclusions then it has absolutely no reason to exist. We've got to interrogate it, we've got to pick it apart. You've got to be willing to be the bad guy," remembers Wright. "To Erik's credit he knew exactly what I meant and took it on, but there were times during the writing of the film that that was a more difficult proposition that it was as merely an idea."

Jensen was just 19 years old – "almost a child with a notebook," Wright says – and working for the Sydney Morning Herald when he first wrote about Cullen. His book coolly recounts the tests flavoured with both affection and aggravation that Cullen subjected him to, including being shot in the leg with shotgun pellets. But Wright believed that if the book was Jensen's verdict on Cullen, then the film needed in turn to consider both men and the dynamic they shared. 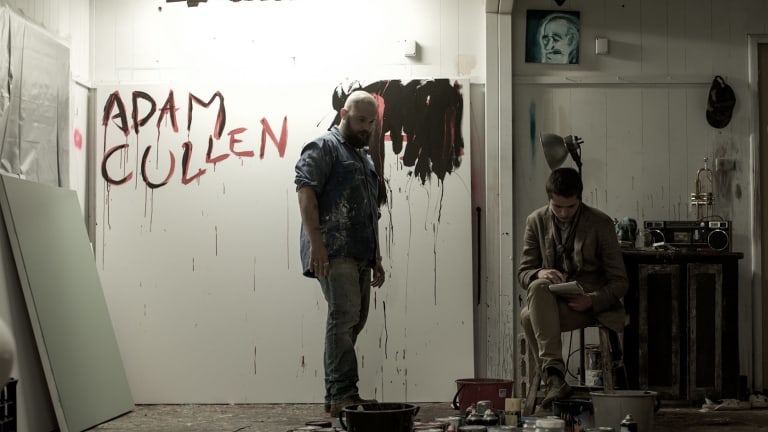 "I say this is a provocation, but that book can be viewed as an act of revenge. I was fascinated by that, but I don't think that's what it is. It could also be seen as an act of dedication," Wright notes. "On the sleeve of Acute Misfortune it says it's a tale 'told at close quarters and without judgment', and I just thought that needed to be discussed. What culpability does Erik bring to it? Is he the equivalent of a conflict photographer?"

"You meet Tom and you get a feeling for how passionate he is. He's very prepared, very driven, incredibly ambitious, and has a single-minded energy," says Daniel Henshall, the Australian actor whose chilling performance as a charismatic killer in 2011's Snowtown made him Wright's first choice to play Adam Cullen. Henshall would have three years to immerse himself in Cullen's life before he was joined by Toby Wallace (the Romper Stomper television reboot) in the role of Erik Jensen.

"We talked about whose film it was. It's very much Erik's film – it's through his eyes," adds Henshall, who lost 22 kilograms in the middle of the shoot to portray the ravaged, dying Cullen in his final days. "We meet Adam because Erik chose to meet and interview him. You see Adam through Erik's eyes and the edit makes that clear, which is a bold choice."

One of Black Lung's guiding philosophies was to destabilise the narrative, and Wright brought that to Acute Misfortune. The film aggressively dispenses with the framing scenes that set up a conventional biopic, instead invoking the off-kilter world Cullen draws the ambitious, accepting Jensen into. Cullen's artworks, brushes and even clothes are used, yet information about the commercial art world is communicated through telling tableaus.

The extensive and sometimes harrowing research isn't referenced in a linear timeline, it's distilled into the performances. It's all shot in the narrower than normal screen ratio of 1.37:1, the "Academy" standard used between the 1930s and the 1950s, which creates a sense of portraiture that references both the artist and the writer as they share what the director calls "the film's implication of inevitability".

"Erik's experience with Adam reflects nearly everyone's experience with Adam," Wright says. "That is a profound closeness, great intellectual reciprocity turning into a painful exchange, and eventually becoming either violent or threatening to such an extent that the person had to leave. You're absorbing what it was to be in this position."

Janine Hosking first brushed up against Geoffrey Tozer's life in 2011, two years after the former child prodigy's passing when a friend who worked in book publishing passed her a transcript of Keating's eulogy. "Geoffrey Tozer's death is a national tragedy," was the first line, and over 45 minutes it celebrated the pianist's rare gifts while delivering a broadside at the Australian arts establishment.

It was a reminder of Keating as the parliamentarian who slayed his opponents in question time, but it was leavened with grief and affection. Hosking had wanted to make a documentary that involved music, and once she discovered the Tozer archive maintained (in a suburban shed) by his estate, the filmmaker knew that she had both the necessary material and, with Keating's help, the spine of the story. After a period of consideration he agreed.

"He knew the power of what he was about to do, but he did it not knowing what other people were going to say about Geoffrey," Hosking says. "He was very insistent that the eulogy would be his final word on Geoffrey Tozer. I would have loved an interview, but he just wanted to do the eulogy and that was his only condition."

Keating's voice is a compass in The Eulogy. He compares the pianist and composer to Nellie Melba, Percy Grainger and Joan Sutherland, but for all the herculean talents, which were obvious from an early age and gave him an international profile, Tozer and his first true believer, his mother Veronica, often struggled to survive financially and his legacy is near unknown in his homeland.

But instead of simply justifying Tozer's greatness, the documentary – with empathy – asks whether Keating was right. One way of looking at The Eulogy is to consider it a trial, with Keating as the prosecutor. The role of the judge, impartial and probing, is played by Richard Gill, one of Australia's leading conductors and a pre-eminent music educator. Gill had met Geoffrey Tozer just once, and wasn't familiar with his music. There was a chance he would refute Tozer's supporters.

"He could have. And Richard wouldn't have taken it on if he felt he was being used as a puppet. And that made it exciting – there's this whatever's going to happen next quality," says Hosking, who shot Gill's initial reaction to a key recording Tozer made with the London Philharmonic Orchestra. "He was very sceptical up to that point. We'd said to him, 'Don't listen to any music until we're ready to play it to you', and now he's a Tozer fan. It needed someone to drill down and really look at Geoffrey Tozer's legacy."

In one scene Gill holds a session with a group of teenage classical musicians, none of whom have heard of Tozer. They are, in a way, a jury ("his note clarity was so on point," one boy enthusiastically observes). There are also responses to Keating from those who held positions of power, and there are interviews, particularly with Tozer's one great love, that have a visceral emotional reach. But the film excludes recreations and an omnipotent narrator.

"I don't like the voice of god disembodied narrator documentary. Once you take that out of the mix you have to look at different ways of emphasising the storyline you want people to follow through the characters," explains Hosking. "What I wanted to make sure happened was that this wasn't a hagiography. You don't have to believe the eulogy, you can check this out yourself by talking to Geoffrey's friends and listening to his music."

Both Hosking and Thomas M. Wright have taken real life events and made films that don't seek to merely represent or conveniently reduce their turbulent subjects, but see them through a clarifying perspective that goes beyond biography. Wright speaks of his attempt to, "pare the film back of all its noise and affectation", while via a sense of discovery Hosking brought her story "full circle". People often refer to what a life is owed, but perhaps this is what the lives of Adam Cullen and Geoffrey Tozer needed.

Nick Lachey Shows His Buff Arms While Out in L.A.

Psychologist bludgeoned his mother to death with a hammer, court hears