She may no longer have her beloved launderette but that doesn’t mean there isn’t a place for Dot Branning on Albert Square.

So it’s just as well that the legendary EastEnders actress June Brown has signed a new contract with the soap to carry on playing the iconic character.

June told Digital Spy today (April 23): “I’m delighted that EastEnders have allowed me to keep playing Dot whilst also accommodating me to take on other work opportunities.”

Dot has been an Albert Square favourite with fans since she first joined the show back in 1985, and luckily for us it sounds like she has no plans to leave it just yet.

Show bosses were keen to keep June in Walford because of her big fanbase and popularity with older viewers, according to a report in The Sun. 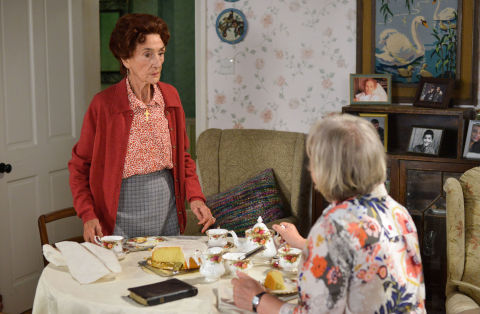 While taking a recent break from the East End, June’s character Dot Branning took some time to pop in to WrestleMania 34 in New Orleans earlier this month.

Rather than the soap legend herself, viewers of the wrestling spectacular actually spotted a photo of Dot in the crowd, seemingly brought along to the event by one die-hard fan.

Hey, Dot showing up at WrestleMania is more believable than her owning a washing machine. Right?

EastEnders continues today (April 23) on BBC One at 8pm.

‘Jumanji: The Next Level’ Crosses $300 Million Mark in North America

Maher mocks MSNBC's 'Never Trumpers': They're 'very far left' because 'look at who's giving them their paycheck'

How Long Are The iHeartRadio Music Awards? The Ceremony Is Short & Sweet, But Totally Epic