EastEnders kicked off yet another dramatic week in Albert Square with a tragic revelation about Hayley Slater.

Stacey (Lacey Turner) and Kat’s (Jessie Wallace) wayward relative (Katie Jarvis) showed up in Monday night’s episode (May 14) intent on making a quick buck selling her belongings in the market, even though she didn’t have a license.

Instead of a warm welcome, Hayley was almost immediately kicked out by Kat because of Stacey’s worry that she’s after Martin Fowler (James Bye). Hayley tried to sell off her items in the market anyway, but the other sellers turned hostile towards her with some intimidating threats. 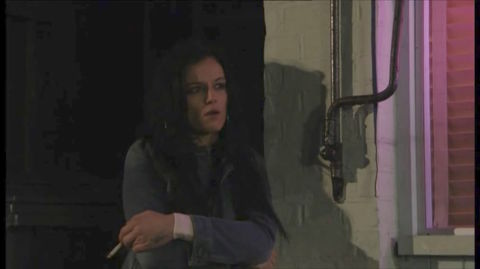 Once again, it was Martin who came to Hayley’s defence and whisked her off to the cafe for some refuge. Unfortunately for Hayley, there was no refuge to be found because Stacey stormed over to warn her once and for all to stay away from Martin.

“I don’t want your hands on him,” Stacey sneered. “He does not need a head-case like you hanging around either!”

Hayley tried calming her relative down by assuring her that she’s got a new boyfriend, but viewers soon learned that it was merely a ruse to hide that she was homeless and spending the night in a sleeping bag in the ally.

Fans know that times are only going to get tougher for Hayley later in the week when Linda Carter (Kellie Bright) catches her in bed with Mick (Danny Dyer) after a night of heavy drinking.

Many viewers don’t suspect that Hayley will have an easy road ahead:

Meanwhile, Stacey has yet more competition for Martin, this time from Sonia (Natalie Cassidy). After their kiss last week, Sonia still seems to be entertaining the thought of reconciling with her ex.

Digital Spy Soap Scoop video – hit play below for all the latest EastEnders spoilers, as Mick ends up in bed with Hayley, and Martin decides who he wants to be with.

Britney Spears Reflects on Breast-Feeding 2 Sons: I Was a 'Milk Factory'

Farrah Abraham: Those Crazy Teen Moms ATTACKED Me on Set!