EastEnders‘ Linda Carter is definitely not the most popular person on Albert Square these days, after falling for Stuart Highway’s evil schemes.

Earlier this week, viewers reacted with fury, sadness and disbelief when Linda (Kellie Bright) turned her back on Mick (Danny Dyer) in the prison when he admitted that he’d considered killing Stuart (Ricky Champ) but thought better of it.

Despite super-lawyer Ritchie Scott (Sian Webber) finding out from police that a witness had confirmed that he’d sold Mick a gun matching the one used in the shooting, Stuart has already secretly confessed to shooting himself to frame the Carters.

In Thursday’s episode (October 4), the divide between the Carters and Linda widened when she actually visited Stuart and confided that she knew Mick bought the gun in secret. 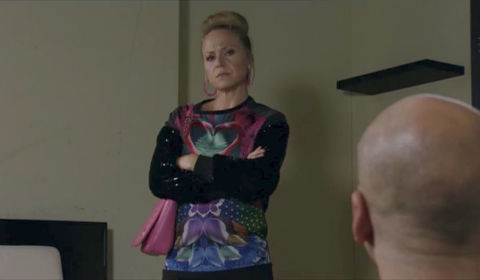 Stuart continued trying to manipulating her, even faking pain to appear vulnerable so she’d feel obligated to redress his wound. It was in this moment that he planted the seed in a conflicted Linda that she should to go to police with her information about Mick’s gun.

“Do right by me,” he begged, with Linda promising: “I don’t have a choice.”

A distraught Linda then fled Stuart’s home to return to the Vic. Although it initially looked like a happy reunion with the Carters was in order, she crumbled into tears once alone.

Are Stuart’s mind games actually working on Linda? Viewers can’t honestly believe Linda is turning on Mick, since Halfway has already told them that his brother shot himself:

There are some viewers who think there’s something else going on here:

EastEnders continues on Friday (October 5) at 8pm on BBC One. 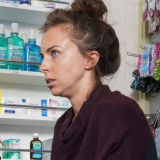