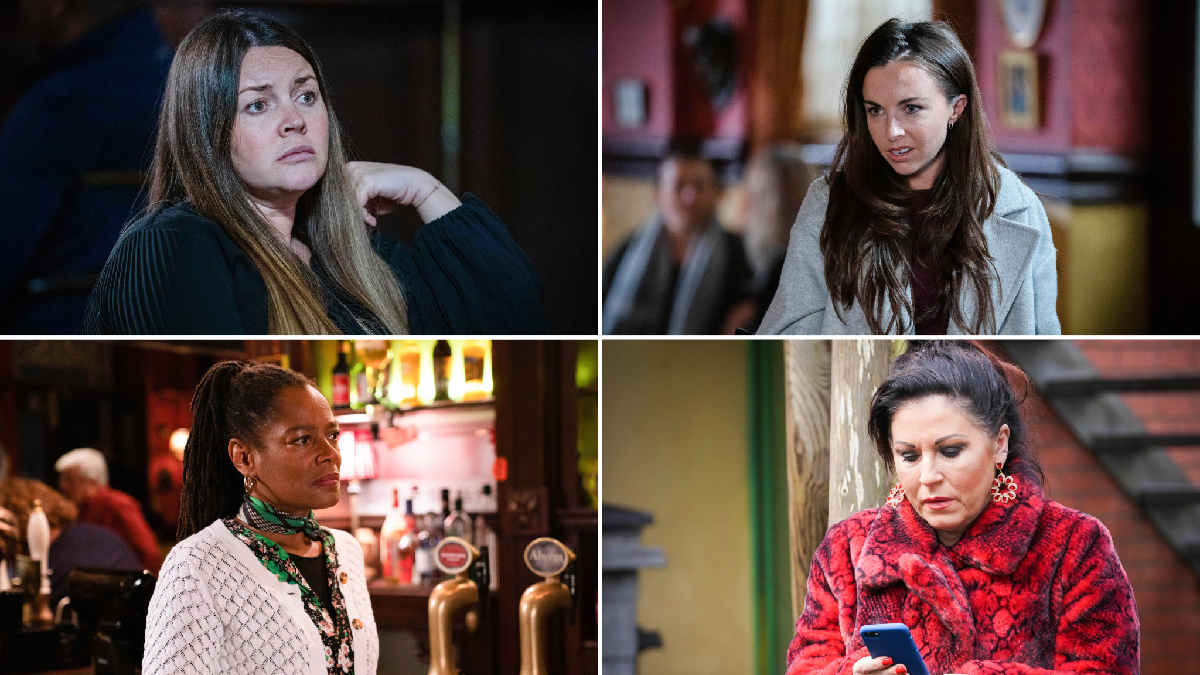 There are feuds kicking off left, right and centre in EastEnders as Ruby Allen (Louisa Lytton) and Stacey Fowler (Lacey Turner) clash once again – and this time, Ruby is in a bad way after tumbling down the stairs.

Phil makes a promise to Kat that there is nothing between him and Sharon but she is non chalant. Meanwhile, Mo tells Kat about Kheerat poaching Mitchell clients. Phil meets with Stas and he is surprised by a text from Kat – and uses the information to his advantage. Kheerat is later turned down by Stas and Phil thanks Kat for the tip off.

Kim promises to get Isaac a date after a rejection from Whitney. Isaac is shocked when Lola arrives as his date. Things go well until a misunderstanding cuts the night short. Sheree is upset with Kim and when Isaac returns home, he feels foolish. He tells Lola he’d like to try again – but why is Sheree enraged?

Kathy suggests to Peter that he takes Bobby out for the night but he is occupied with Ash.

Dotty has a proposition for Ruby – paying Tiffany to promote the club on social media. Stacey reluctantly apologises to Ruby.

Sheree demands that Isaac takes Patrick out, halting his plan to go out with Lola. When Sheree arrives, Patrick realises he was being babysat and he encourages him to go and spend time with Isaac. Later, Sheree persuades Isaac not to get into a relationship.

At the Vic, Kim describes her new business idea for a matchmaking service and Sheree warns off Lola, who refuses.

Phil warns Suki to stay out of his business and he arranges a meeting with Sharon. Sharon admits her feelings but Phil tells her they’re over. Later, Phil makes an approach to Kat – Ben arrives and is surprised to see Kat. As she leaves, she overhears Phil and Ben making comments about her.

Martin wants to know about the scan, so Ruby snaps at him. She looks into private scans, knowing the dates won’t add up.

Bobby tells Suki that Ash got suspended and she is furious. Kheerat is reminded by Suki that he has stepped out of line going behind her back.

Martin tells Ruby about a trip he has planned while Lily sees an opportunity and promises to get Stacey on side. Later, Martin, Ruby and Stacey join up to discuss the holiday. As Ruby leaves, she discovers she is bleeding – and phones the hospital in a panic.

Kat is sulking over Phil but spots Stas and she forms a plan. Keegan worries that the rent money is all gone but Tiffany reckons she can sort it with Jack.

Isaac is upset as Patrick offers him some advice – giving away that Sheree has meddled. Isaac tells Sheree he is ready to tell everyone the truth now.

Stacey is fuming that Lily has ordered holiday stuff on her card. As Ruby is distracted by Dotty, Stacey stops by and picks a fight with Ruby. The pair end up talking through their feelings. Later, when the argument kicks off again, Ruby falls down the stairs…

Lola is fed up about Isaac so Kim offers to match Mila next, who is impressed with her skills. Later, Mila sets her sights on Iqra.

Mark Urman, Champion of Independent Films, Is Dead at 66

Woman was falsely accused of murder after her partner killed himself