EastEnders broke away from its usual format tonight (July 6) for Shakil Kazemi’s funeral, and the scenes were some of the most emotional the soap has ever seen.

Teenager Shakil was brutally stabbed to death back in May, and the show has been working closely with the Ben Kinsella Trust to handle the story as sensitively as possible.

In the groundbreaking episode, the soap deviated from its standard setup to feature inserts of real-life people whose relatives have been killed in stabbings. 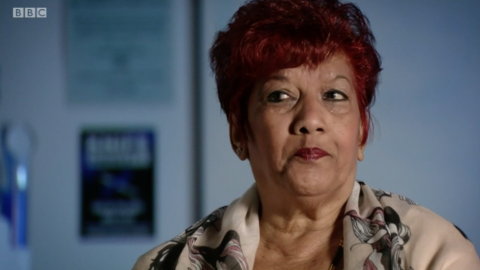 As the incredibly brave contributors – consisting of mothers, fathers, brothers and sisters – shared their harrowing stories, viewers took to Twitter to share their condolences and praise the show for raising awareness of knife crime.

The emotional episode culminated in an incredibly moving scene in which the real-life contributors appeared on screen with the cast.

As the characters followed Shakil’s coffin out of the church, they were surrounded by the contributors who were holding pictures of the relatives they had lost to knife crime.

The change to the soap’s format may have made for some tougher viewing than fans are used to, but it’s impossible not to admire EastEnders for making this incredibly brave and important episode.

The emotional episode was a triumph.

Eastenders airs on weekdays at 9.30pm on BBC1.

The Cruse Bereavement Care Freephone National Helpline is staffed by trained bereavement volunteers, who offer emotional support to anyone affected by bereavement. The helpline can be contacted on 0808 808 1677, Monday-Friday at 9.30am-5pm (excluding bank holidays), with extended hours on Tuesday, Wednesday and Thursday evenings, when it is open until 8pm. You can also email using [email protected]

‘She had lost over 15 pounds, and she is sustaining hair loss’: Ghislaine Maxwell’s lawyers and Federal Bureau of Prisons clash on Maxwell’s conditions in new court documents

These Classic Leather Riding Boots Are 50% Off at Nordstrom

Um, Wow, Queen Elizabeth's Corgis Have Truly the Most L-o-l Names Ever