EastEnders will air the fallout of Mick Carter’s shock attack tonight (May 10) as the culprit is revealed.

Mick (Danny Dyer) was targeted by a masked intruder in Tuesday evening’s tense scenes, leaving fans speculating about who could be responsible.

The landlord was left unnerved when he heard a noise coming from the barrel store while manning the pub alone, but was put in a terrifying situation when he went to investigate. 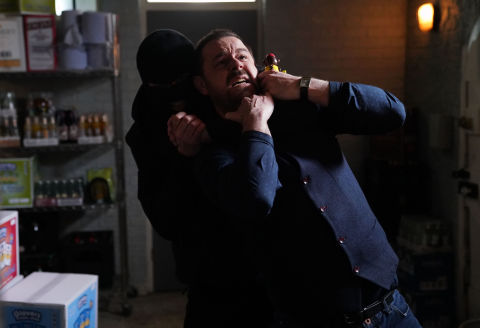 Having been ambushed by the mystery attacker, Mick appeared unable to fight back – but fans will have to tune in tonight to see if he managed to get away unscathed.

Whatever happens after, we can reveal that the culprit’s identity will be revealed in Thursday’s episode – with some interesting twists and turns ahead. Just who exactly was responsible for targeting Mick? And why?

EastEnders airs tonight at 7.30pm on BBC One.

Digital Spy Soap Scoop video – hit play below for all the latest EastEnders spoilers, as Mick ends up in bed with Hayley, and Martin decides who he wants to be with.

Jalen Rose on his admiration for journalist Van Lathan