Actor Ned Porteous – who plays Joe Tate on the show – previously confirmed that a masquerade ball will feature on the soap in the near future as Joe plans a fundraising event in aid of fiancée Debbie’s daughter Sarah.

“It’s a fundraiser for transplant awareness in aid of Sarah [Sugden], who needs a heart,” he explained.

And while we’ll no doubt get plenty of emotional scenes with the heartbreaking story in the future, for now the masquerade is just promising a lot of drama:

In a shot that wouldn’t look out of place in Stanley Kubrick’s eerie Eyes Wide Shut, Emmerdale has shared a GIF that focuses on a blonde-haired woman, who’s dressed in a red hooded cloak and, of course, is wearing a masquerade mask.

Could that be Rebecca, or even Belle? Maybe even the much-called-for return of Kim Tate? Does this spell trouble for those set to attend the ball?

The soap’s fans have raised a collective eyebrow on Twitter following the upload, with many left confused, suspicious, and eager to share their theories:

Theories are building and growing in numbers, but it looks like we’ll have to wait a while for any of this to unfold properly.

Meanwhile, we might go and stick V For Vendetta on to get in the mood… 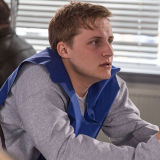 Is Meghan McCain Returning to 'The View' Post-Baby?

Palestinian killed as Israel fires back after rocket attack from Gaza