Vanessa (played by Michelle Hardwick) had a fierce rivalry with Emmerdale villain Pierce (Jonathan Wrather) before he was found guilty of raping his ex-wife, Rhona Goskirk (Zoe Henry) two years ago. Believing him still to be behind bars in recent weeks, she is unaware the killer has made his return and murdered Graham Foster (Andrew Scarborough) last month. However, last night’s double-bill of the ITV soap saw the pair reunited as he took her hostage, but fans were left concerned what had happened to her son, Johnny Woodfield (Luca Hepworth).

So far, Pierce has amassed to stay in the shadows, with Kim Tate (Claire King) the only villager he’s spoke to under the false alias of solicitor Oliver.

The villain has come close to being rumbled by his ex-wife Rhona but the sneaky character has escaped capture every time.

For the first time last night, Vanessa clasped eyes on the villain as she was playing football with her young son Johnny.

Struck by fear, the mother acted on instinct as she chased after her nemesis when he picked the child up and ran away with him, but it was the next scene which made fans believe a plot hole had emerged. 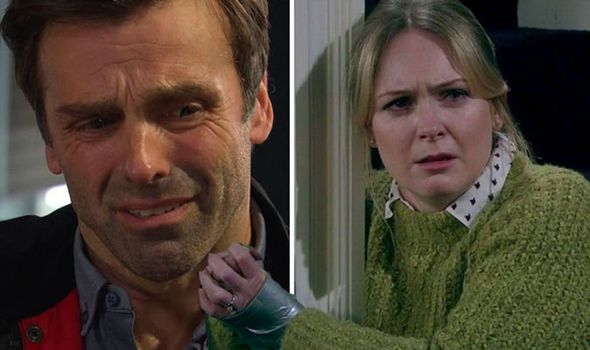 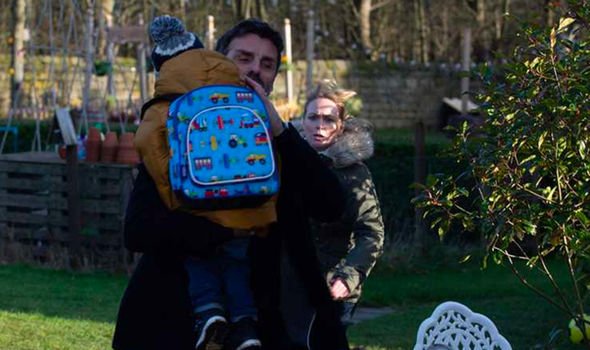 The village vet ran into Laurel Thomas’ (Charlotte Bellamy) house and pleaded with the villain not to harm her young son.

Scenes then unravelled elsewhere in the Dales before the action returned to the ongoing hostage situation, with Vanessa now tied to a stair bannister.

Locked down with duct tape by her captor, the distraught mother watched as Pierce returned from upstairs where he’d supposedly left Johnny.

Taking to Twitter, fans were in uproar as they tried to understand how the terrified character had got herself tied up without a battle ensuing. 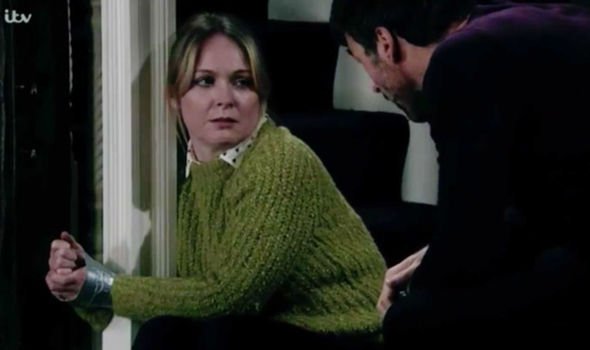 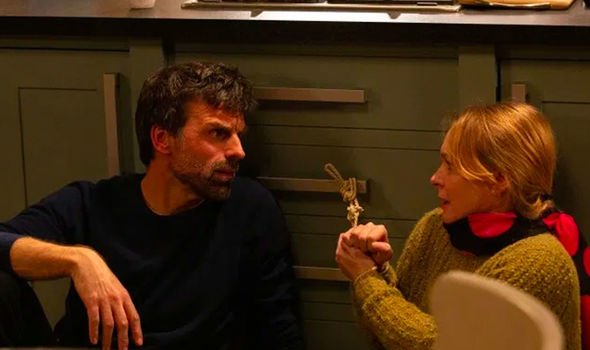 One wrote: “And Vanessa has just let Pierce gaffa tape her to the bannister when a child is at risk? Rubbish – she’d do just about anything to protect a child.”

Another added: “How did Vanessa allow herself to be forced into that house by Pierce?”

Whilst a third commented: “How in the name of all that is holy, did Vanessa allow pathetic Pierce to tie her to the bannister with what looks like flimsy take that looks as though it’s lost it’s stickiness. It beggars belief [sic].”

However, a fourth posted there might be a reason Vanessa is willing to hand herself over to the villain to save her young son.

Earlier on in the episode, the village vet was seen attending a GP appointment, but what she was told wasn’t revealed to viewers.

The viewer wrote: “As much as I’m far from keen on this character, I feel sorry for Vanessa first because her son is involved in this nightmare and second because she’s obviously had a terrible diagnosis regarding her health.

Knowing her health may be on the decline, is Vanessa willing to face Pierce’s horror ordeal to ensure her family are kept out of danger?

Although the mother-of-one’s fate hangs in the balance, it’s been confirmed an hour-long special will air in the coming weeks as the murderer’s storyline reaches a head.

On Tuesday 25 February, the soap will air for an hour instead of it’s usual 30 minute slot.

It’s not been revealed what the episode will entail, but with Rhona set to discover her ex-husband is back in the village, explosive scenes are on the horizon?

Will Vanessa make it through the next week and a half alive, or will she become the latest victim of the killer’s revenge?

Is It Weird That We're a Little Jealous of Becky G and Naomi Scott's Cute Friendship?