Emmerdale viewers saw DI Mark Malone (played by Mark Womack) gave Will Taylor (Dean Andrews) the surprise of a lifetime when he turned up on his doorstep back in March. The corrupt police officer has done everything in his power to try and get a helpless Will to take on risky jobs for him but last night’s episode finally saw him strike back – will Malone make it out the other side or will his rival be forced into a difficult cover-up mission?

Malone has secretly been conducting an affair with Will’s fiancée Harriet Finch (Katherine Dow Blyton) after it was revealed the pair were former lovers.

The pair have hooked up in the church vestry as well as booking nights away to keep Will from finding out the truth about the extent of their relationship.

Scenes this week saw Malone profess his love to Harriet, who is supposed to marry Will in the months to come.

The policeman asked Harriet to flee the village and begin a new life with him away from the drama of the Dales but she refused. 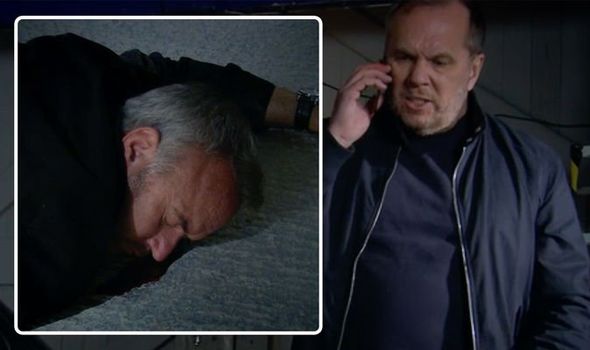 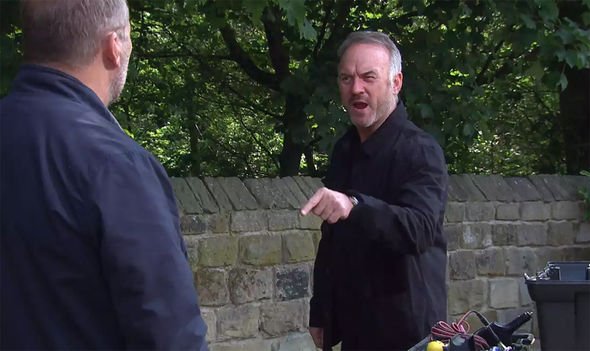 In a surprise turn of events, Harriet decided to commit to Will for good and has told Malone to leave her alone as she looked to end their affair.

Malone was left furious with Harriet’s admission and soon looked to get revenge on his love rival, who he has already been tormenting for months.

The copper ended up issuing further threats to a terrified Will over his daughter Dawn Taylor (Olivia Bromley) and grandson Lucas.

However, the anger got the better of Will and he decided to lash out at Malone with a spanner, which saw him tumble to the floor. 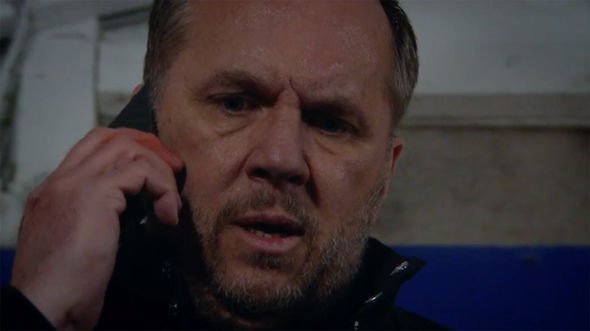 An official preview clip from Monday night’s episode sees Malone still lifeless on the floor, with a panicked Will ringing up a mystery accomplice.

The frantic attacker can be seen speaking to someone for help, asking: “Hey, are you alone? Look don’t hang up…

“No I’m not okay, I need you to come to the garage now. Yes, it’s urgent, make sure you come on your own, okay?”

It’s not known who Will has on the other end of the line but with several residents wanting to see Malone get his comeuppance, it could be anyone’s game.

Could it be Harriet who finally decides her loyalties are remaining with her partner or will it be someone less obvious who will step up and help Will?

Fans are currently being kept in the dark over whether Malone will have finally met his grisly end and will have to wait until the scenes air next week to find out his fate.

However, if Malone has indeed been killed, what will Will decide to do next?

It seems he could be forced into a risky cover-up mission if a lifeless Malone fails to regain consciousness – but who will he task into helping him?

Elsewhere in the Dales, the walls are closing in on Jamie Tate (Alexander Lincoln) who viewers know was responsible for the hit and run attack on Moira Barton (Natalie J Robb).

His estranged wife Andrea (Anna Nightingale) discovered what Jamie had done and later decided to tell his mum Kim (Claire King) who initially believed she was responsible.

Spoilers for next week’s episodes show Jamie will continue to panic over his actions which could see him end up in prison if he is found out.

Will he decide to do the right thing and hand himself in or will he instead try to cover up the accident in the weeks to come and shift the blame elsewhere?

Emmerdale airs Mondays, Wednesdays and Fridays at 7pm on ITV.

Girl, 12, among four teens charged over brutal attack after woman is ‘beaten senseless’ outside shopping centre | The Sun

'I still felt pregnant… I was in total shock', Jorgie Porter on the moment she miscarried at 14 weeks with quads