Emmerdale star Ash Palmisciano has revealed how he ended up securing the part of Matty Barton.

Palmisciano became the ITV soap’s first transgender actor, and his character has been part of a storyline which has seen Moira Dingle (Natalie J Robb) struggling to accept Matty following the revelation that he’s transitioned during his years away from the village.

Appearing on Lorraine, Palmisciano said that he didn’t originally plan to audition for the role, and that he was actually invited to by the producers.

“It’s crazy,” he said. “There’s an amazing charity called All About Trans, and they work with positive representations in the media of trans people. And they said to me, ‘We’re doing an interaction with Emmerdale. They’re thinking about doing this storyline, and they’re looking for advice on positive reps. Do you want to come?’.

Palmisciano added that he has been thrilled with the positive response that the storyline has received so far. 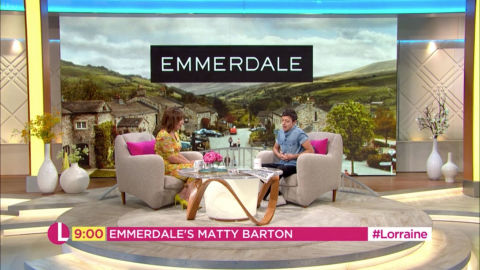 “I was kind of expecting it to create a bit of a stir, but I wasn’t expecting how much impact it was going to have,” he said.

“I’ve had so many lovely messages about the nature of the storyline and how it’s affected people, and that’s fantastic. I couldn’t have asked for more.”

Next week will see Moira bond with Matty, as she attempts to make up with him.

Every Disney Fan Should Complete This Incredible, Edible Bucket List

I Took 53 Plane, Train, & Bus Rides This Year, But I Wouldn’t Have It Any Other Way