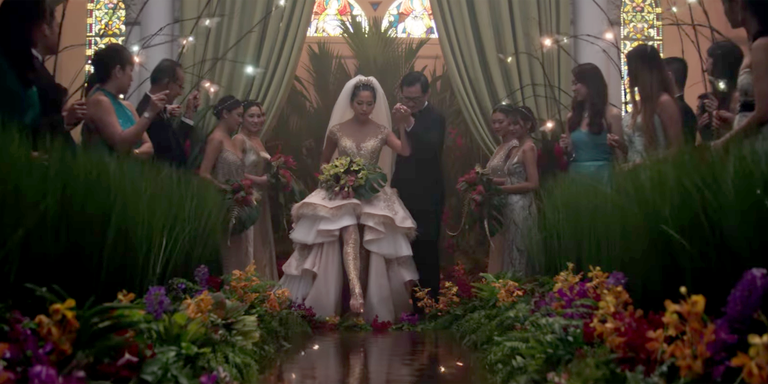 Crazy Rich Asians, the hotly anticipated big screen adaptation of Kevin Kwan’s best-selling novel of the same name, is set to open nationwide Aug. 17, 2018, roughly five years after the book was first published. Below, a cheat sheet to get you all ready for the movie version of CRA. Just make sure to have an Astrid-approved couture gown ready for opening night. (Or a designer suit Eddie would drool over.)

While you should definitely re-read the book for Eddie’s hilarious antics alone, the plot goes a little something like this: Our leads are Rachel Chu, an American-born Chinese with a promising career as an economics professor at NYU, and her boyfriend Nick Young, who also teaches at NYU (his field is history). Overseas, three elite Chinese families – the Youngs, the Shangs, and the T’siens – are introduced to the reader ahead of the wedding of the century between the rich (and handsome) Colin Khoo and fashion icon Araminta Lee. The twist? Nick is from one of those rich Chinese families and has yet to tell Rachel. The wedding brings them to Singapore, where Rachel meets Nick’s family for the first time. Someone really should have warned her about Nick’s mom, Eleanor.

According to Variety, Chu was hired for the job after putting together a visual presentation of his family photos for producers Nina Jacobson, Brad Simpson, and Jon Penotti. Chu, whose filmography already includes two Justin Bieber documentaries, three Step Up movies (he directed two and executive produced one), and the second installment of the magic heist flick Now You See Me, later told Entertainment Weekly that he “knew in my heart” he was the director for CRA. “It’s a movie that speaks to my identity as an Asian and that struggle of figuring out who I am and where I belong, and it deals with what my family went through, what my mom and my dad from mainland China [went through], so all the struggles I’ve experienced are in this book in a fun way, not in some sort of lecturing way.”

So honored to be in the presence of this asskicker/groundbreaker. We are about to make some waves together. @kevinkwanbooks #CrazyRichAsiansTheMovie

The casting call was difficult at first

As one of the first American-made films in a long time to feature an all-Asian cast, Chu ran into problems. As he told BuzzFeed, “When I do a ‘regular’ movie with Caucasian actors as the leads… actors are everywhere,” noting that while there’s been an abundance of Asian talent in the business, the roles written for them have been few and far between. “It’s a systemic problem because there aren’t enough leading-man roles for people to cut their teeth on and learn how to be a leading man. As an Asian male myself, I feel like this representation is very important to me, and I want it to be a range of dudes that have a range of looks and feels, so it’s not just one-note either.”

There was also an issue with getting the right actors with the appropriate accent. “Even though we’ve seen thousands of professional actors and now thousands of new people who want to pursue acting… it is still very difficult,” Chu told BuzzFeed in March 2017, shortly after Constance Wu’s casting was announced and just before Henry Golding joined the film. “[We] realized mainland Chinese actors can’t necessarily do an English accent properly or understand the strife of an Asian-American character.”

Kevin Kwan has been involved with the film since day one

“It’s been amazing, the producers, Nina Jacobson of Color Force has been amazing in the way that she’s really involved me, the author, in shaping this entire project,” Kwan told Cosmopolitan.com in May 2017. “I helped [with] every stage where there was an important decision to be made, creatively. I was able to give advice to screenwriters, then work with the production team as they began working on the set design, the costumes, and more recently, [character notes] for the actors. It’s been an enormously collaborative experience. They’re really trying to create an authentic of a world as possible.”

In the Mix with @jonmchu and his brilliant sound design team. Wait till you hear the INCREDIBLE soundtrack!!! It's getting real folks!!! #crazyrichasiansmovie

As Lainey Gossip points out, the date is likely intentional, seeing as eight has always been viewed as a lucky number in Chinese culture. In addition to opening in the eighth month in a year ending in “8,” the date itself, when taken apart to become a math equation, boils down to the damn number: 1+7=8. Too much? Too bad, because phonetically, “18” also sounds like the expression for “will be rich.” Crazy Rich Asians will be rich. I already love this movie! Also, if you believe in all of this and worked on any of the following movies set to open the same weekend, good luck to you: Captive State (John Goodman and Vera Farmiga), The Happytime Murders (Melissa McCarthy and Maya Rudolph), and Three Seconds (Rosamund Pike and Clive Owen).

The trailer was presented by Constance and Henry during an appearance on The Ellen DeGeneres Show. As you can see, Rachel and Eleanor will have one hell of a showdown in the movie:

A poster was also released:

Which explains these beautiful behind-the-scenes photos, courtesy of the cast and crew.

The Kwan, the Wu and the Chan. #CrasyRichAsiansTheMovie

Aaaand that's a wrap ?✨ #crazyrichasiansmovie out

And that's a WRAP! Another one for the history books. Appreciate this man so much. This one felt really special. Amazing cast & crew. Look for it soon! @jonmchu #crazyrichasiansmovie

This post will be updated as more movie details are available.