Alongside Jacqui Smith, Iain Dale joined Kate Garraway and Alex Beresford to go over the latest news headlines on the final GMB of the week. However, as the ITV news segment drew to a close, Kate couldn’t resist a cheeky swipe at Iain’s hairstyle as she brought up the conversation surrounding Prime Minister Boris Johnson’s latest hairdo.

But with no hairstyle of Iain’s to speak of, Jacqui, Alex and the political commentator himself did see the funny side as Kate took aim.

“Just before we leave,” Kate began. “I know hair, Iain, is a subject you are always focussed on at all times.”

“How can you do that to him?” Alex chipped in through his laughter.

As the panel let out a laugh, Kate turned to Jacqui and brought up how they often discussed her hairstyle while she took part in Strictly Come Dancing. 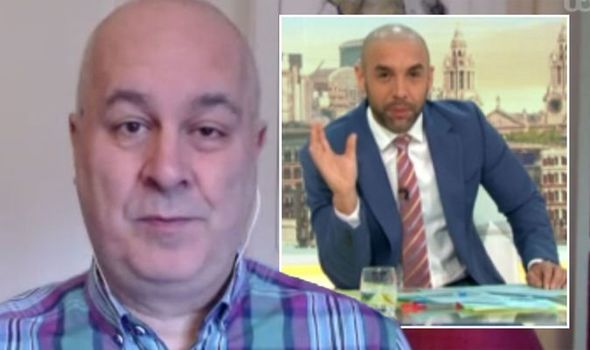 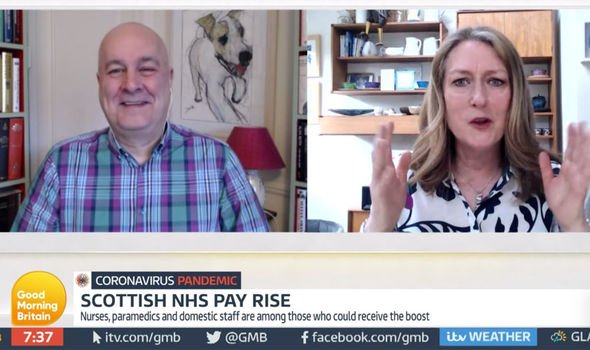 “Jacqui, we celebrated your hair pre and post and during Strictly – it’s always fabulous.”

Eventually getting to Boris’ hair, Kate added that Boris the “only other person” whose hair people seemed to be more “obsessed” with.

Kate said: “The only other person whose more obsessed with hair seems to be everyone else looking at Boris Johnson’s.

“His hair has always been a subject, I wanna say smirks but sorry Boris it always has.” 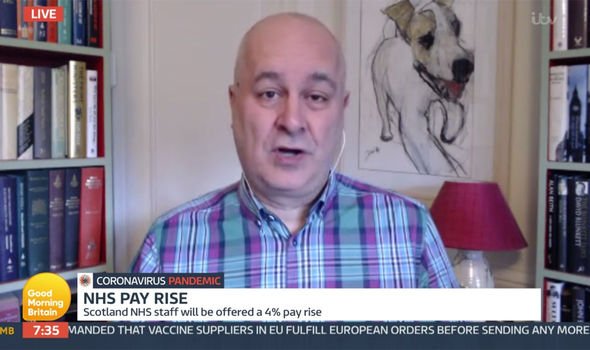 After he stepped out looking “shaggy” recently, Kate asked if the GMB guests were concerned with his look.

But Iain was still mulling over her earlier swipe at his own personal appearance.

However, he couldn’t resist a joke aimed at Alex’s way instead: “Alex, I’m appalled you haven’t come to my rescue here as a fellow slap head!”

“I’m right behind you, mate,” Alex joked as he tried to get back in Iain’s good books.

Spotting the chance for another joke, Iain chimed in: “I was hoping you’d be in front of me.”

Alex burst out into hysterics at Iain’s joke as the panel regained their composure to move on with today’s show.

But the conversation surrounding the Prime Minister’s lockdown hairdo also got ITV viewers at home talking.

“I always wonder what shampoo and conditioner he uses …” one viewer tweeted to the show’s Twitter account.

While a second weighed in: “With everything going on in the world and you make something out of a haircut. If it was cut and tidy you’d be calling for him to resign for breaking lockdown rules!”

How will Luke Skywalker return for Star Wars Episode IX?