Home » TV & Movies » Film review: See You Up There

See You Up There

Very few movies have done justice to the First World War. It’s hard enough to imagine Verdun or the Somme or Passchendaele, let alone recreate one of them with miles of trenches, shell holes, barbed wire, smoke, wreckage and bodies. Paradoxically, computer-generated images now make that recreation more possible than it’s ever been – so this French movie begins with a sequence that took my breath away.

A camera at drone height crosses a dun wasteland. The camera picks up an army dog, loping through the carnage, with a message in its khaki harness. The dog enters a trench and is greeted by French soldiers as an old friend; we follow it to an officer, who unfolds the orders. The men must cease all conflict: it’s November 9, 1918, two days before the Armistice is to be signed. 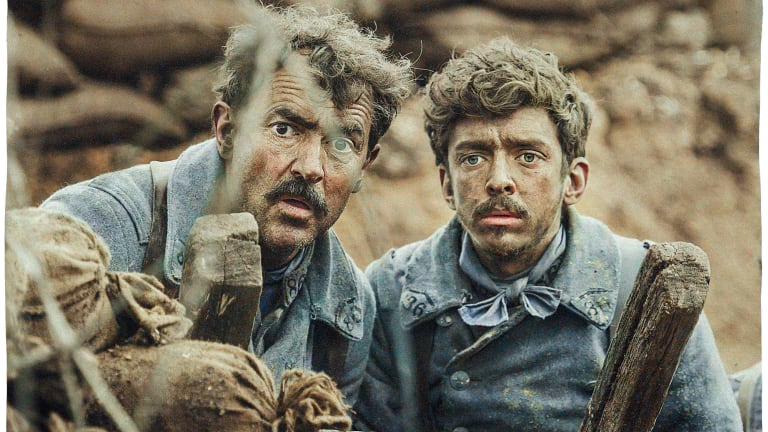 Lieutenant Pradelle (Laurent Lafitte) is disgusted with the order. To provoke a fight, he sends two men out in daylight to reconnoitre. When they are killed, his men go over the top to avenge their comrades, right on cue. A former accountant, Albert Maillard (Albert Dupontel) is buried by a shell, then dug up and saved by his young friend Edouard Pericourt , an artist (Nahuel Perez Biscayart). Pericourt is then wounded and rescued by Maillard.

When he wakes up in a hospital, Pericourt realises that his jaw is gone. Maillard steals morphine to keep him sedated. A year later, they share a garret in Paris. The young artist is in despair; Maillard upends other disabled soldiers to get more morphine.

See You Up There (Au Revoir la-Haut, in its original title) is a compelling, bitter story, told as romantic pageant. It’s based on a prize-winning 2013 novel by Pierre Lemaitre, known for his crime novels. The film is full of rich historical details that anchor the sense of agony and resentment, but the plot is driven by huge coincidences. These entwine the four or five major characters to a ridiculous degree, but it doesn’t really matter in a film so big on circus-like theatrics and grand flourishes.

Pradelle defrauds the French government with contracts to bury dead soldiers; somehow he has married Pericourt’s sister Madeleine (Emilie Dequenne). Young Pericourt crafts gaudy masks to hide his disfigurement, like the Phantom of the Opera. Maillard, solid and long-suffering, becomes a handmaid to his mad friend, a sort of Buster Keaton straight man.

Directing and starring, Albert Dupontel adopts a style that’s familiar in recent French film. There’s a little of the souped-up deadpan comedy-drama of Amelie (2001), and more of the breakneck speed and comic narration of A Very Long Engagement (2004). It’s an acquired taste. The artifice can become exhausting if the characterisation is too thin. Here, there is enough to keep us going, partly because it’s so truthful about the aftermath of World War I in France. It’s hard to deal with so much horror without a little distancing. Dupontel keeps that ironic tone. The pain is always close to the surface, throbbing like a wound.

'Below Deck': Did Rhylee Gerber Trade Boats for Bison?