American Horror Story co-creator Ryan Murphy has shared our first look at season 8, Apocalypse, on social media. Fans will be delighted to see the witches from season 3’s Coven back together – with singer Stevie Nicks front and centre.

Stevie had a memorable cameo in season 3 which played up to her “white witch” stage persona. She starred as herself and imparted witchy advice to the young witches of the Coven.

Murphy shared a picture of Nicks flanked by Sarah Paulson’s Cordelia and Lily Rabe’s Misty with the caption: “The Return. Cordelia, Stevie and Misty casting a bewitching spell.”

The Return. Cordelia, Stevie and Misty casting a bewitching spell.

The Return. Cordelia, Stevie and Misty casting a bewitching spell.

Soon afterwards, he shared another photo on Twitter featuring even more faces from American Horror Story’s past.

This time Emma Roberts, Frances Conroy, Gabourey Sidibe and Taissa Farmiga were all present and correct alongside Nicks, Paulson and Rabe.

He wrote: “The Coven Returns. What a thrilling night with the legend Stevie Nicks on the set of AHS.”

We haven’t seen some of these characters on-screen since 2013, so it’s fair to say that we’re a little bit excited.

Murphy has previously confirmed that the upcoming series will be a crossover event featuring characters from Murder House (season 1) and Coven (season 3). It will see Cordelia and the Coven attempt to stop the Antichrist (a grown-up version of Michael Langdon from Murder House played by Cody Fern) from ending the world. 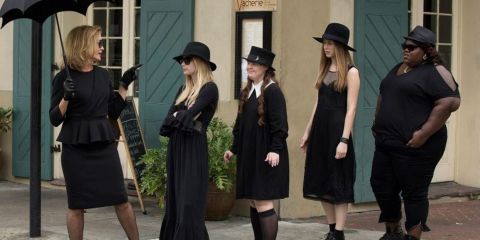 “It’s a season unlike anything we’ve done because there’s a big hook to it,” Murphy has said. “There’s a huge thing that happens in episode five.”

American Horror Story: Apocalypse debuts on September 12 on FX in the US and on September 27 at 10pm on FOX in the UK. Catch up on series 1-6 on Netflix, with season 7 available to buy on Amazon Prime Video.

Joe Biden’s glamorous niece, 33, has a string of offenses from drunk driving to ‘hitting a COP’… but has not been jailed – The Sun