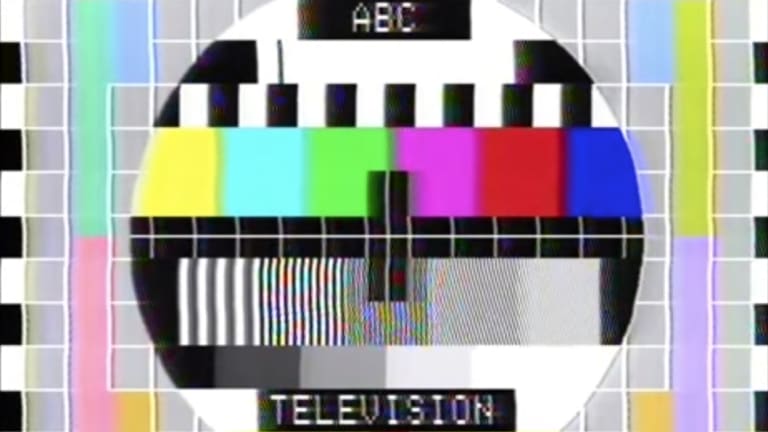 First published in the Sydney Morning Herald on November 16-17, 1978

A strike by members of the ABC Staff Association blacked out all ABC radio and television in NSW from early yesterday afternoon.

About 1800 association members walked off the job when the ABC management stood down an operator in the Sydney switchroom for refusing, as directed by the stall association, to connect the parliamentary broadcast from Canberra to the national network. 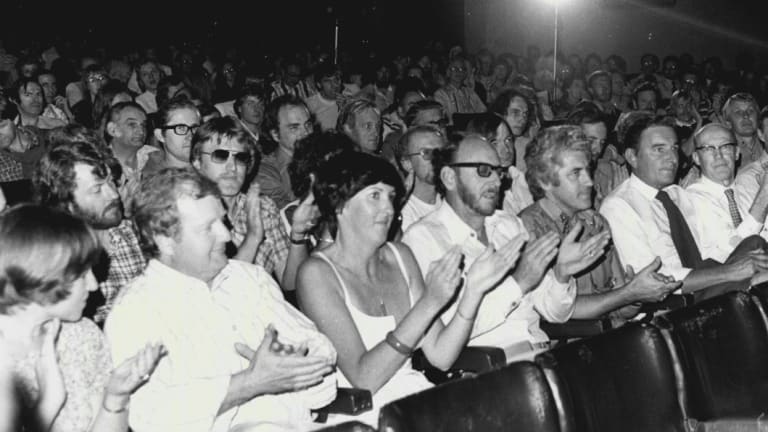 Striking ABC staff at a meeting at the Regent Theatre in November 1978.

ABC journalists in NSW members of the Australian Journalists' Association, joined the stoppage when they learnt of the stand-down and subsequent walk-off. 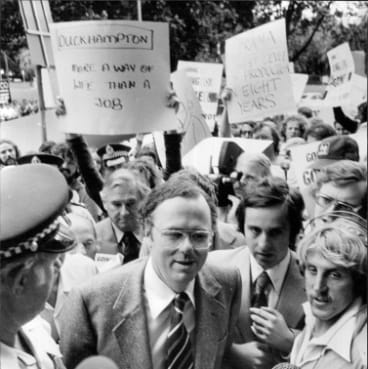 The Minister for Post and Telecommunications Tony Staley is ushered through demonstrators at the ABC.

Striking staff association members will meet at the Regent Theatre at 11am today to review the situation.

Association members in other states have been directed by their federal office to hold stopwork meetings today.

Yesterday was the second successive day on which ABC staff refused to put Parliament on air, in protest against the withdrawal of a staff-elected ABC commissioner and cuts in ABC budget and staffing.

On Tuesday a Commonwealth Deputy Public Service Arbitrator, Mr L.H Booth, granted an application by ABC management to stand down members of the staff association who refused normal duty.

At 2.13pm yesterday, when Federal Parliament was due to be broadcast, a switchroom operator refused a directive by a management representative to switch it through. He was then stood down and other members of the association walked off the job.

The secretary of the staff association's NSW branch, Mr Nick Collis-George, said last night that today’s meeting at the Regent Theatre would decide on the question of a return to work.

Nevertheless, the branch's industrial action committee would recommend that the ban on parliamentary broadcasts would remain until the management was prepared to reinstate any staff stood down and negotiate over the issues in the dispute.

The committee would also recommend that if the employees returned to work, the ban should be extended to entail a complete stoppage by all staff association members during the period scheduled for the broadcasts. 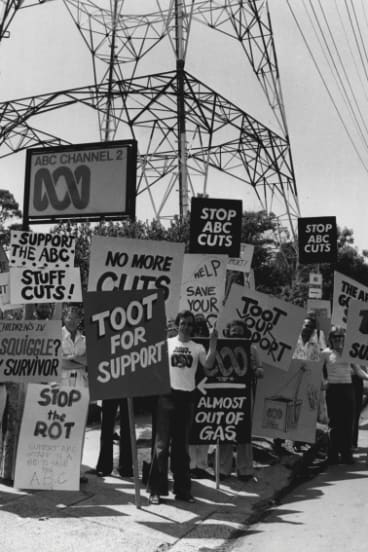 ABC staff who protested in front of the Gore Hill studios on November 15, 1978.

This would stop all ABC radio and TV transmission in NSW during the time scheduled for parliamentary broadcasts — a large segment of the ABC's daily radio programs on Tuesday, Wednesday, Thursday and Friday when Parliament is sitting.

ABC journalists were attending a scheduled slopwork meeting at the Trades Hall to discuss the question of a staff elected commissioner and other issues when word of the stand-down arrived.

The meeting then carried overwhelmingly a motion deploring the stand-down and joined the stoppage. The journalists will not return to work before Friday.

The journalists' federal secretary, Mr Syd Crosland, said later that he had asked State branches to call meetings at 11 am today in all capital cities except Sydney.

The acting general manager of the ABC, Mr Graham White, said last night: "I only want in say this: It is the most distasteful thing I have had to do in my career – – to authorise and direct the stand-down today of ABC staff whom I regard as my colleagues."

The 'ham in the sandwich'

Lionel Barr, the man who "pulled the plug" on parliamentary broadcasts on Wednesday and triggered a dispute which blacked out the ABC in NSW, described himself yesterday as "the ham in the sandwich".

Mr Barr, 48, is married with two children and lives at Blacktown.

He is an operator at the ABC's switching complex in Forbes Street and has worked for the ABC for 17 years.

He received a standing ovation when he was called as the first speaker at yesterday's strike meeting in the Regent Theatre of more than 1000 members of the ABC Staff Association.

The strike ended on 21 November and normal transmissions resumed. Lionel Barr was reinstated without penalty.

So what DID China do when outbreak emerged?

‘The OA’: Filming Is Complete, So When Will Season 2 Air?