Note: The following article contains discussion of miscarriage that some readers may find upsetting.

Former Coronation Street and Dynasty star Stephanie Beacham got visibly emotional on Loose Women today (April 26) as she opened up about having a miscarriage.

The panel bravely discussed their own experiences of miscarriage and when guest Stephanie came on, she explained of her own miscarriage: “It was horrible for everybody.

“Unfortunately I was bashed in a rehearsal, and that’s what brought on the miscarriage. They are very emotional things.”

Revealing it happened when she was around four months, Stephanie continued: “By that time you’ve almost decided the school. Between three and four months your filling up, you’re making plans.

“So when I’d had the procedure, because I had a miscarriage and I was in hospital, and I said, ‘I want to know the sex’. It was a little boy. I said, ‘May I see him?’ And the nurse that was passing said, ‘No they’re thrown in the incinerator’.” 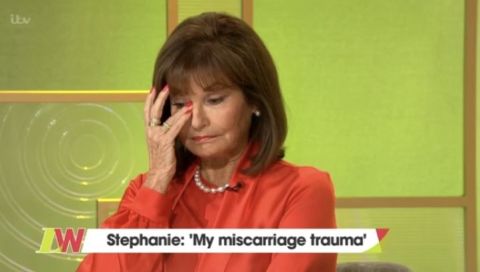 The panel expressed shock at the story, an emotional Stephanie admitting that she was in “such pain that [she’s] never dealt with it”.

“I do hope there is more care, I’m feeling trembly saying it now. But I hope there’s more care taken. More acknowledgement, as far as the parents are concerned, that was a little boy.

“I watched the smoke as I left the hospital. Isn’t that mad?” she added.

She added: “You have to put that in the past and then go on. I’m laughing simply because how horrid is that?'”

Sands supports anyone affected by the death of a baby. You can contact the Sands National Helpline on 0808 164 3332, or email [email protected]

I'm 5'0, and I Swear These Stores Sell the Best Jeans for Petites

The Bold and the Beautiful spoilers: Thorne is going to promise something big to Katie, Bill has a decision to make