Home » TV & Movies » 'Frasier:' Peri Gilpin Talks About Losing the Part of Roz to Lisa Kudrow … Then Getting it Back

Fans of NBC’s sitcom Frasier are reveling in the news that a reboot is in the works. Show star Kelsey Grammer has been in talks trying to iron out specifics, and original cast members David Hyde Pierce, Jane Leeves, and Peri Gilpin appear to be on board.

Playing the role of Frasier’s tough-talking producer Roz Doyle, Gilpin was actually passed over for the part at first and shares how she and a future Friends star bonded through the audition process. 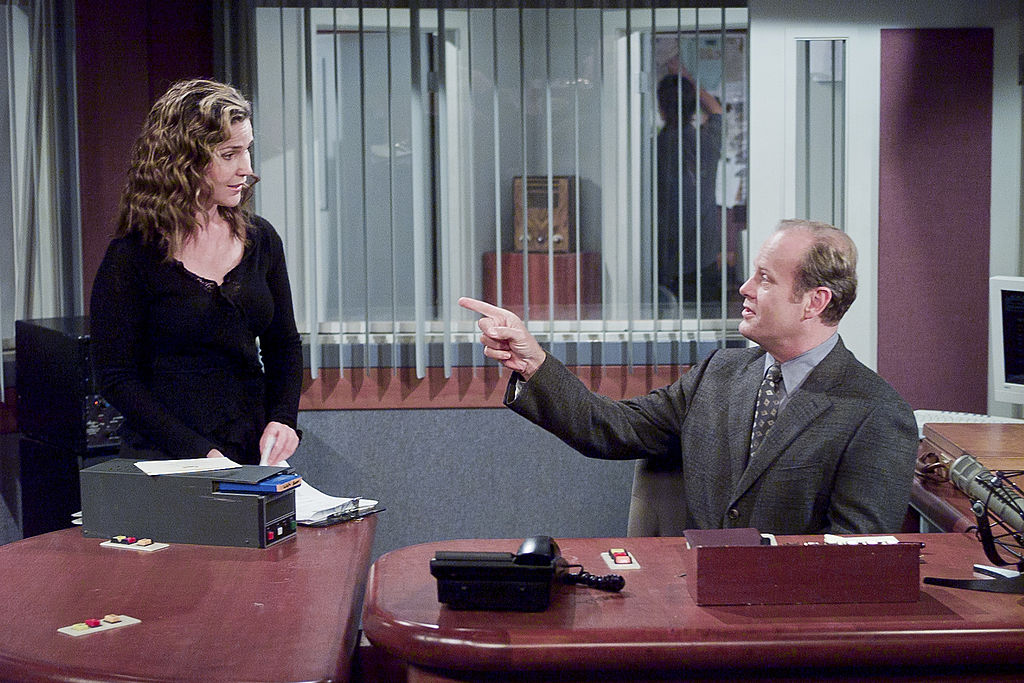 Earlier this month, the entire main cast of Frasier (with the exception of John Mahoney who passed away in 2018) appeared on the online show Stars in the House via Skype. Supporting cast members Dan Butler, Bebe Neuwirth, Tom McGowan, Harriet Harris, and Patrick Kerr also called in for the mini-reunion.

The ensemble spoke of their favorite memories and episodes, and didn’t hold back on singing each other’s praises. “The best moments, and I hang on to them, they are fresh always still, there has been a moment when I fell in love with all of you,” Grammer said, getting emotional. “Specific to each of you, and then what’s so remarkable is that it happened again and again and again. I would sit and think ‘Dear God, they’re wonderful’ and just be completely wrapped in this love that I have to this day.”

Pierce, who played Frasier’s brother Niles, echoed Grammer’s sentiments. “I think we’re all very mindful of the fact that we had someone who was, so to speak, the star, who took such pleasure in the work of everyone else, of us, of the guest stars,” Pierce said of Grammer. “There’s a lot of people who would say, ‘The light is on me. Find what light you can’ … You didn’t do that because you have such beautiful confidence in your gifts, that you’re not worried about having other talented people around you. You encouraged that.”

“It was such a family,” Leeves agreed. “It was an amazing experience.”

When choosing who would play the role of Roz, casting director Jeff Greenberg revealed that a plethora of accomplished actresses tried out for the part. “I brought in wonderful actresses of every size, shape, and age,” Greenberg told Vanity Fair in 2018. “Allison Janney, Patricia Clarkson, Hope Davis, Janeane Garofalo, Salma Hayek. The last two left standing were Lisa Kudrow and Peri Gilpin.”

Gilpin recalled bonding with Kudrow as they went through several rounds together of trying out for the role. “Lisa and I went on at least five auditions together for Roz,” the Frasier star recalled. “We became fast friends because we were in the same boat, young actresses trying to get a job.”

According to the Vanity Fair article, Kudrow won the role much to Gilpin’s disappointment, yet early rehearsals had the writers regretting their decision.

THANK YOU @peoplemag! And @HBO! ??? and @entertainmentweekly! And Michael Patrick King! And @danbucatinsky! TV Actress of the year! #PEOPLEmagazineawards #theComeback

While director Jimmy Burrows praised Kudrow for her talent, he admitted he didn’t see her as Roz when rehearsals got rolling. “Lisa’s brilliant, but Roz needed to be someone who could stand toe-to-toe with Frasier,” he said.

“We were re-writing the character to fit Lisa’s personality,” series co-creator David Lee concurred. “Roz stopped being a formidable opponent.”

Deciding to double back and offer the role to Gilpin, Greenberg reached out to the actress with the news.

“I was at dinner. A man comes to the table and asks, ‘Are you Peri Gilpin? You have a phone call,’” Gilpin remembered. “It was Jeff. He said, ‘Would you like to come to work tomorrow on Frasier?’ I immediately asked about Lisa. He told me that was his next call.”

Gilpin gave props to Kudrow for contacting her personally to wish her luck on the show. “Lisa called me later and said, ‘I want you to know this is your job. I don’t want you to feel bad about it. I want you to enjoy it,’” the Frasier actress revealed. “She’s amazing.”

Kudrow soon went on to be cast in Mad About You and then went on to Friends fame, so both actresses did quite well at NBC.

The one lesson I’ve learned from life: Dame Vera Lynn