We see Gendry back at work in Winterfell, forging dragonglass weapons for the final battle against the White Walkers.

While Arya was happy to reunite with Gendry, we learn soon enough that she has other things besides a friendly reunion in mind. She hands the blacksmith a piece of paper that has a strange design on it.

And since Arya indicated that she wanted Gendry to make a new weapon for her, fans have been wondering what sort of weapon Arya had in mind.

What is the nature of the weapon Arya wants Gendry to make?

The nature of the weapon that Arya wants Gendry to make remains a mystery, but fans have been trying to make informed guesses based on the glimpse of the blueprint. 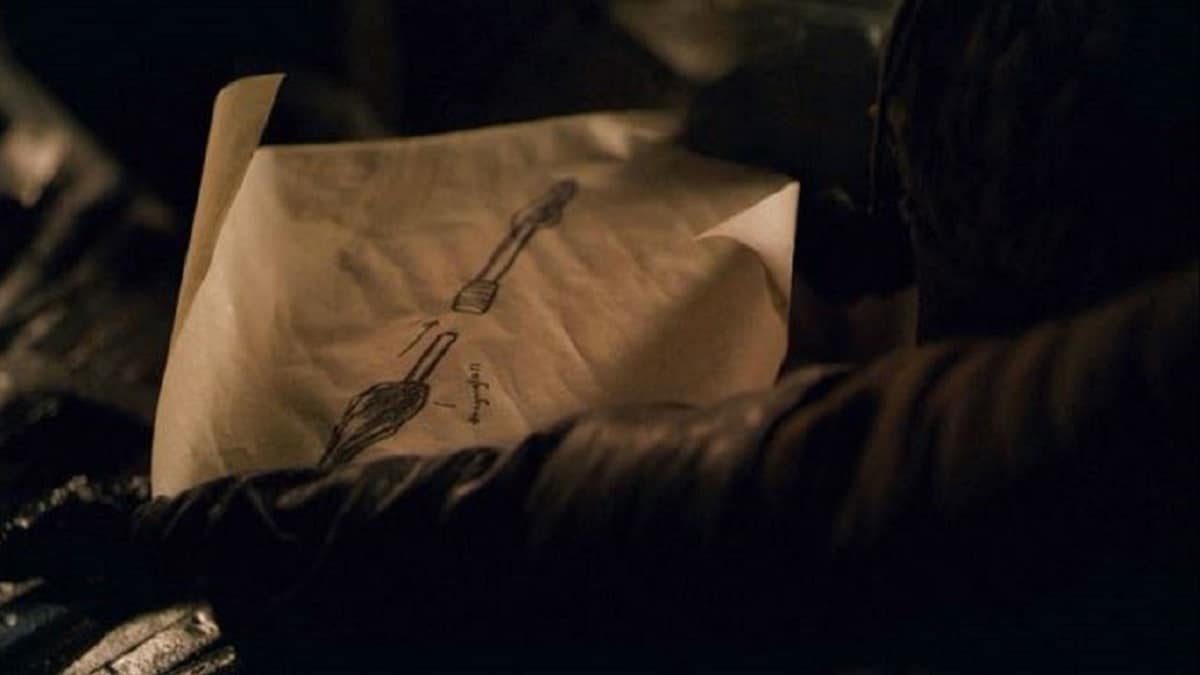 Based on what can be seen, fans are speculating that the trained killer’s blueprint is a design for what she considers the ultimate assassin’s weapon.

It appears from the diagram (see above) that the weapon is a spear-like projectile.

We can clearly see what looks like the spearhead labeled dragonglass, the term commonly used in Westeros in reference to an obsidian-like substance that is capable of killing White Walkers and wights.

As fans of Game of Thrones already know, dragonglass is the only substance, besides Valyrian steel, that is able to kill the dreaded White Walkers. Arya already has a Valyrian steel dagger — Littlefinger’s assassin dagger that Bran gave to her.

Arya is apparently planning to complement her dagger, which would be useful only for close-range combat, with a projectile weapon that has a dragonglass head and can be used to take out White Walkers from a distance.

But the design of the weapon looks more complicated than an ordinary spear. It appears from the diagram that the upper section of the weapon is detachable from the lower half.

The lower half also appears to be a component of the whole that functions as part of the mechanism for a projectile weapon.

While some fans have suggested that the weapon could be a version of the ancient projectile weapon called an atlatl, which employs a simple mechanism to project a dart or spear with greater force over a greater distance than unaided human arm, others have suggested that Arya’s weapon could be what the Game of Thrones’ weapon designer Tommy Dunne was enthusing about in a recent interview with Vanity Fair.

“There is one creation in Season 8 that is absolutely phenomenal,” he told Vanity Fair. “It’ll be a showstopper. That was great to finish. It was great to make, great to design it that it was about to be reverse-engineered and made into two different items.”

Based on what we know about Westeros technology, the ultimate projectile weapon that Arya could invent is a crude version of a firearm that proves to be more effective than a crossbow or simple ballista for stopping adversaries from a distance.

Although Westeros does not have the technology to produce firearms, their engineers are familiar with projectile weapons such as crossbows (Tyrion used a simple crossbow to kill his father Tywin Lannister) and ballista.

Some fans, therefore, guess that if Arya is going to come up with a new type of projectile weapon that justifies Dunne’s enthusing then it must be a crude version of a firearm.

And fans on Reddit are already speculating about a weapon along the lines of a firearm.

So, why would Arya need a ‘rifle’?

Although modern-style firearms are unknown in Westeros, a dedicated killer like Arya could come up with a crude design that approximates a firearm, and which a skilled and talented blacksmith like Gendry could use to build Westeros’ prototype rifle.

“What do you need something like this for?” Gendry asks when Arya hands him the paper with the design.

And like Gendry, fans have also been speculating about who Arya is planning to use the weapon to kill. We know she has a long hit list, but guesses so far range from Cersei to Viserion, and the Night King himself.

But regardless of her final target or targets, fans are anticipating that Arya’s actions armed with the weapon will play a crucial role in the final resolution of the Game of Thrones’ plot.

Who is Olivia Colman's husband Ed Sinclair, when did he marry the Peep Show actress and how many children do they have?

Christina Haack Shares Video of 'Busy Bee' Son Hudson Anstead, and Fans Can’t Get Over How 'Adorable' and 'Intelligent' He Is