Chloe pulled the prank on Sam on MTV’s Just Tattoo of Us, explaining that she wanted to “cock block” him.

“No one would ever go near him now. I’ve cock blocked him for life,” she said.

It wasn’t long before the guilt set in, though, as Chloe revealed: “I am regretting it a little bit now. I didn’t think it would be that big.” 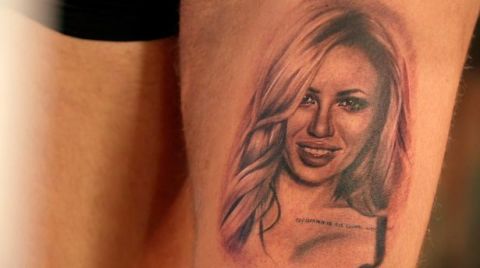 “Next time you going to get filler or surgery on your face it’s not going to f**king look like you,” he exclaimed.

But he seemed to calm down pretty quickly as before a group hug with Chloe, host Charlotte Crosby and guest host TOWIE‘s Joey Essex, Sam joked: “I can’t stay angry, can I?”

Earlier this year, Charlotte welcomed Scotty T as the new host of Just Tattoo of Us by having her ex Stephen Bear’s face tattooed on Scotty T’s arse.

Scotty said of his ink: “When I first turned around and saw the tattoo for the first time, I didn’t actually know what it was, and I saw the face and I was like, ‘Eh?'”

“Your tattoo is so bad, I am so sorry that I did that to you,” Charlotte added. “You’re one of my best friends, I can’t even escape looking in his face. Good job I don’t see you naked a lot.”

Scotty T left the show at the end of series three, and this time around Charlotte has been hosting the MTV reality show with a whole new line-up of special guest presenters.

Just Tattoo of Us airs on MTV.

Guilt season 2 release date, cast, trailer, plot: When will Guilt series 2 be out?

The Masked Singer on FOX: Ken Jeong in tears after first correct guess of season 4