And it seems the Made In Chelsea star is still turning heads back home. Toff has now caught the eye of Emmerdale hunk Danny Miller — known to millions of soap fans as badboy Aaron Dingle. 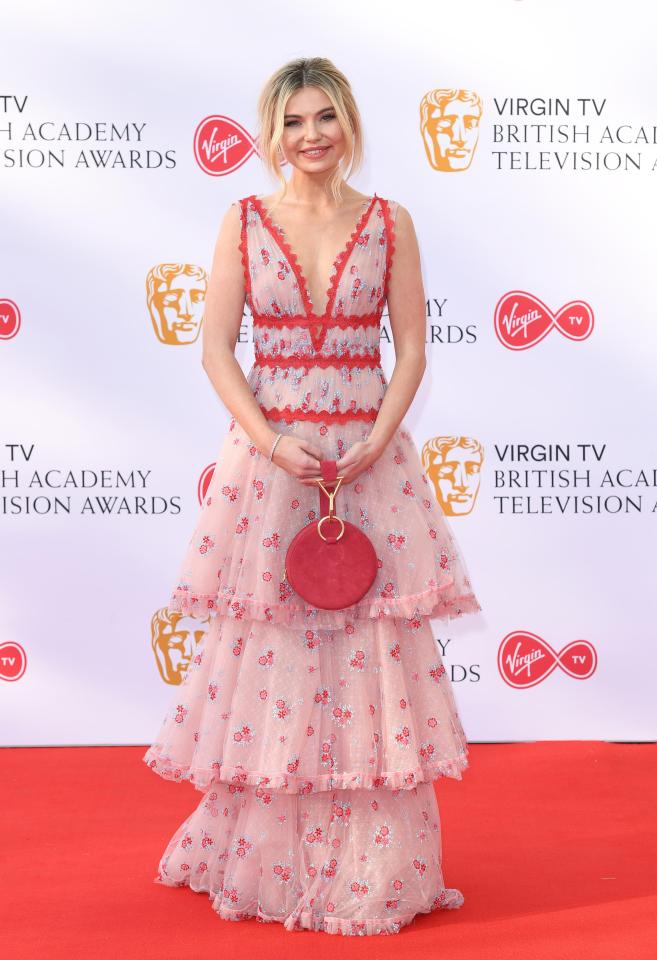 I can reveal the pair spent much of Sunday night cosying up after the Baftas.

They seemed engrossed in one another in the smoking area, before skulking off somewhere a little more private at the after-party at London’s Royal Festival Hall.

Toff and Danny, were still inseparable when they joined a breakaway group to keep the party going in the bar at the nearby Mondrian Hotel.

A source said: “Danny was clearly in a celebratory mood, even though Emmerdale got beaten by Casualty in the Best Soap category. 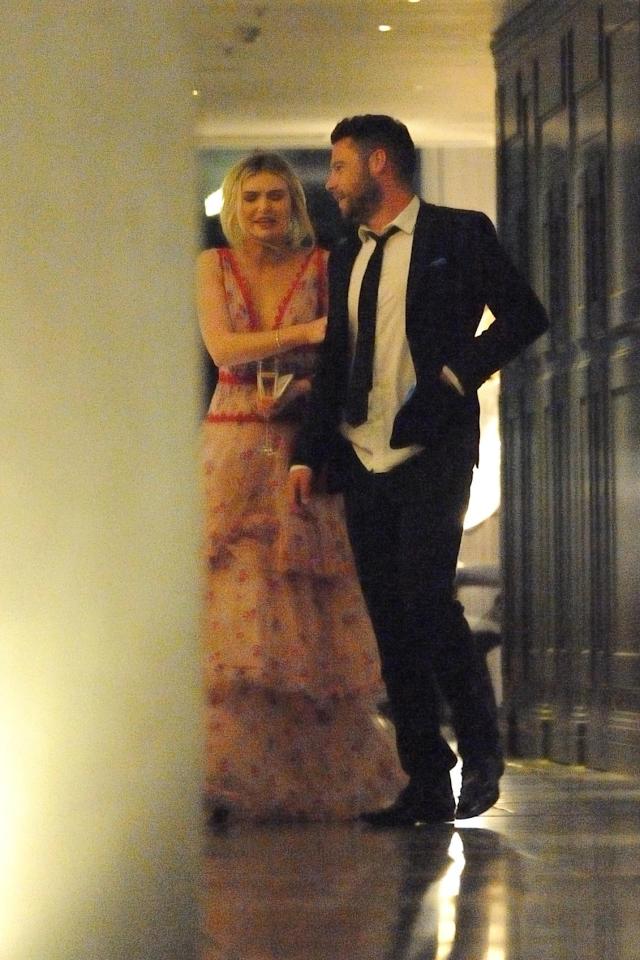 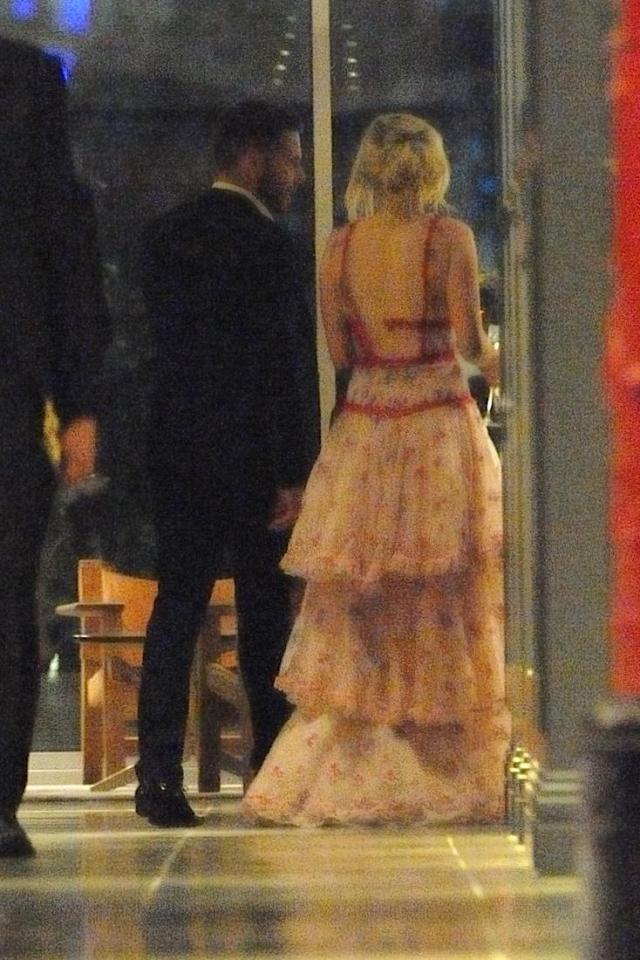 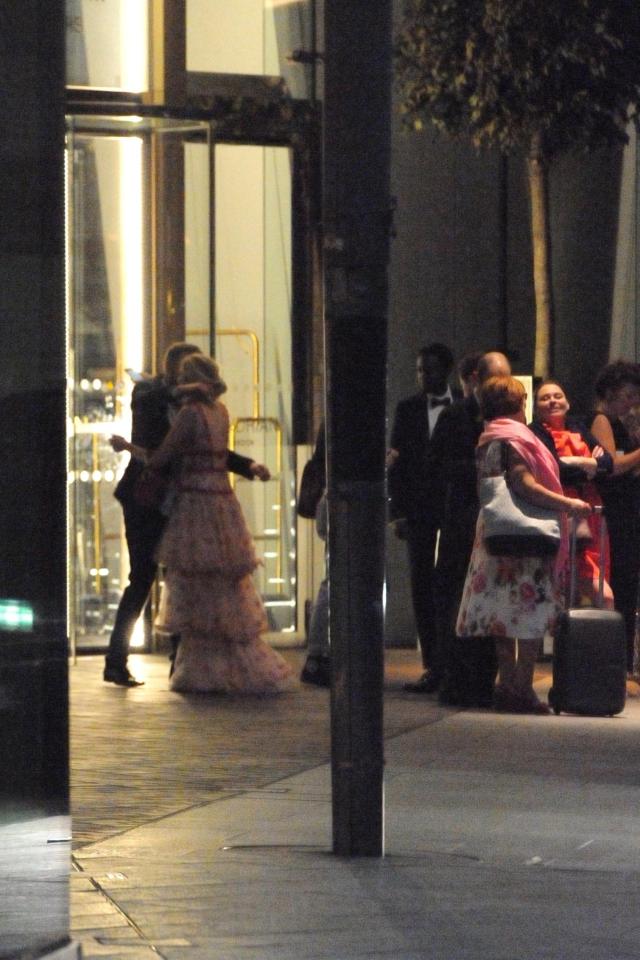 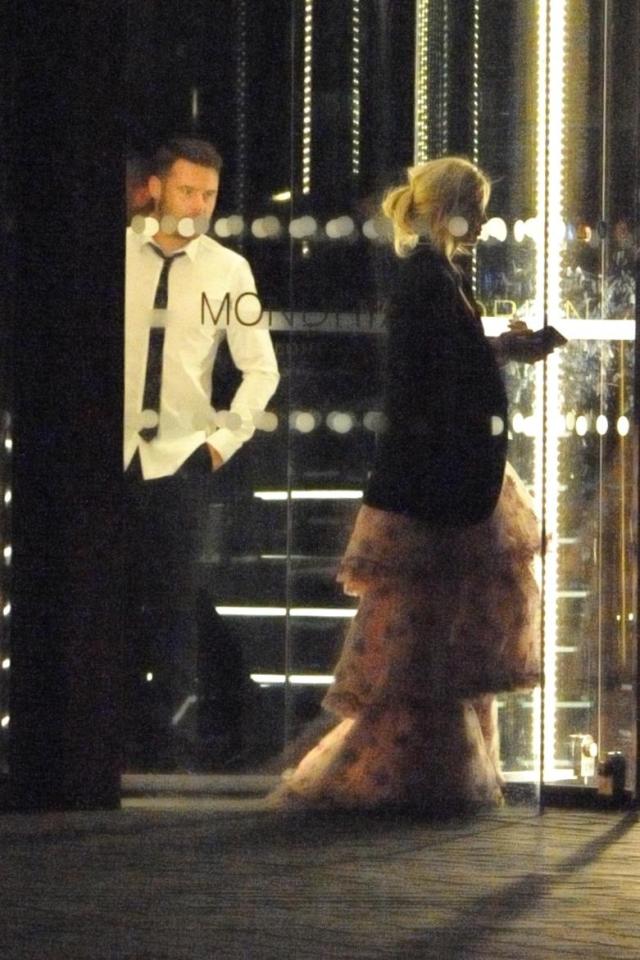 “He was one of the last people standing at both the official after-party at the Royal Festival Hall then later at the Mondrian, when a splinter group wanted to keep things going.

He and Toff looked very cosy and later he led her around the edge of the dancefloor to somewhere a bit more private.”

As our pictures show, they were still very much together as Toff waited for a taxi home outside the Mondrian in the early hours.Danny was seen planting a kiss on her cheek and giving her a big hug. He even gave her his jacket to keep warm. What a gent! 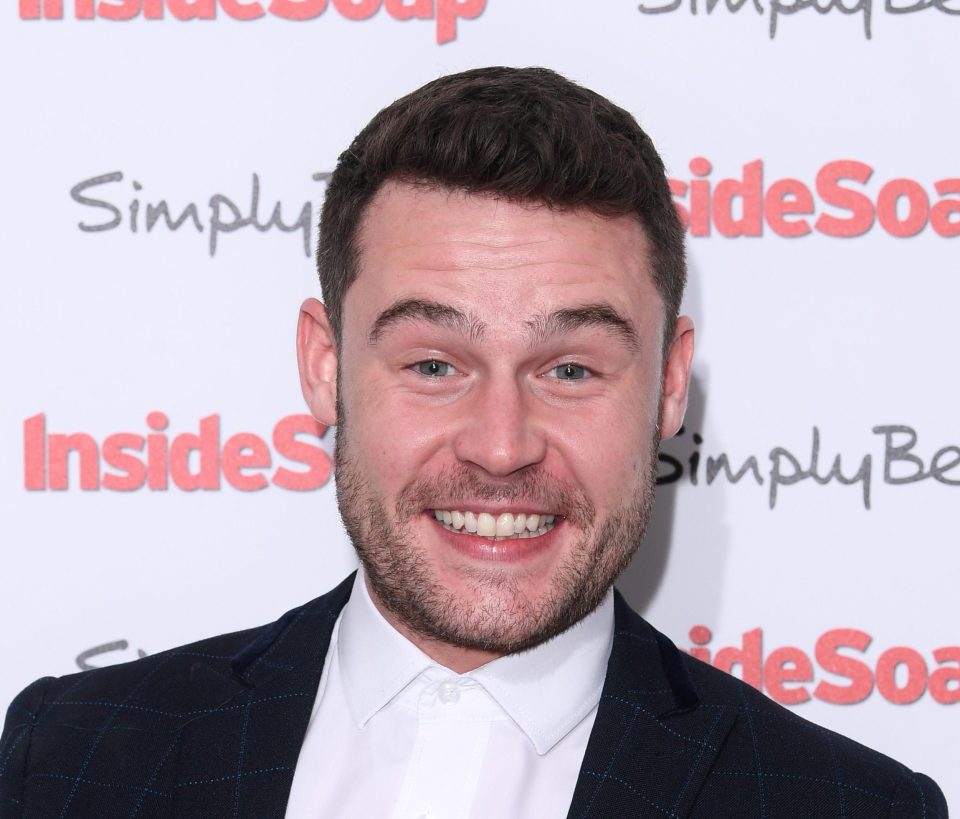 Toff is currently single after a couple of dates with Made In Chelsea co-star James Middleton went nowhere.

Although last month she was linked with Gary Lineker’s son George — a wannabe dotcom millionaire who co-founded the website GetSung to showcase new musical talent.They were seen cosying up at a club and snapped leaving a restaurant launch. Danny’s relationship history is a bit chequered too.

Two years ago The Sun revealed he had a secret fling with Emmerdale co-star Isabel Hodgins – at the time, she was dating another co-star Michael Parr while Danny was in an on-off relationship with Hollyoaks actress Kirsty Leigh-Porter.

They both tried, but failed, to keep their fling under wraps.He doesn’t sound like a keeper, Toff.

MORE than 15 years in the industry means Caroline Flack has plenty of experience negotiating the pitfalls of fame. 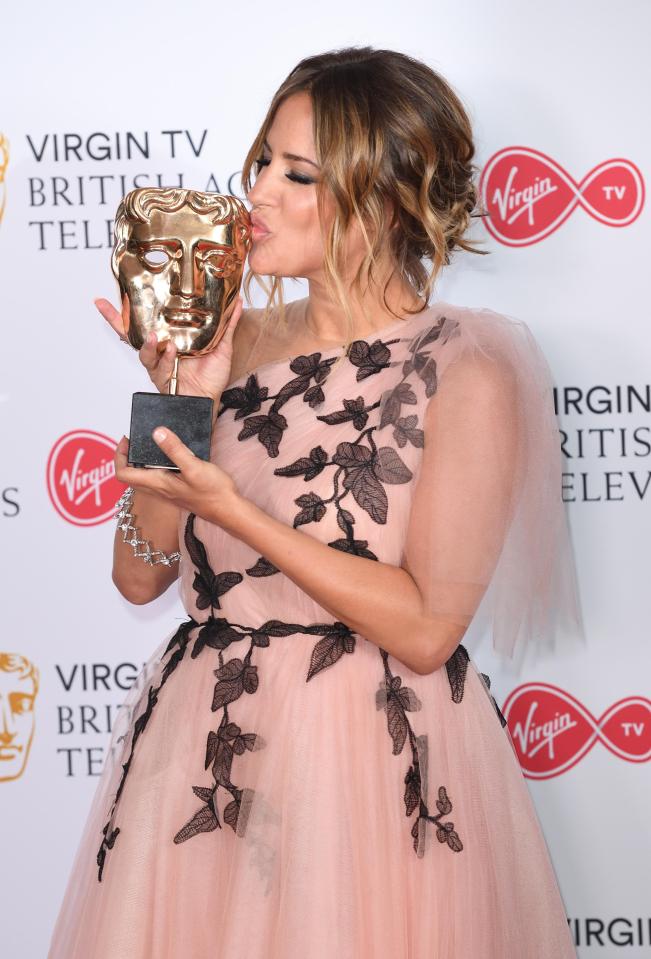 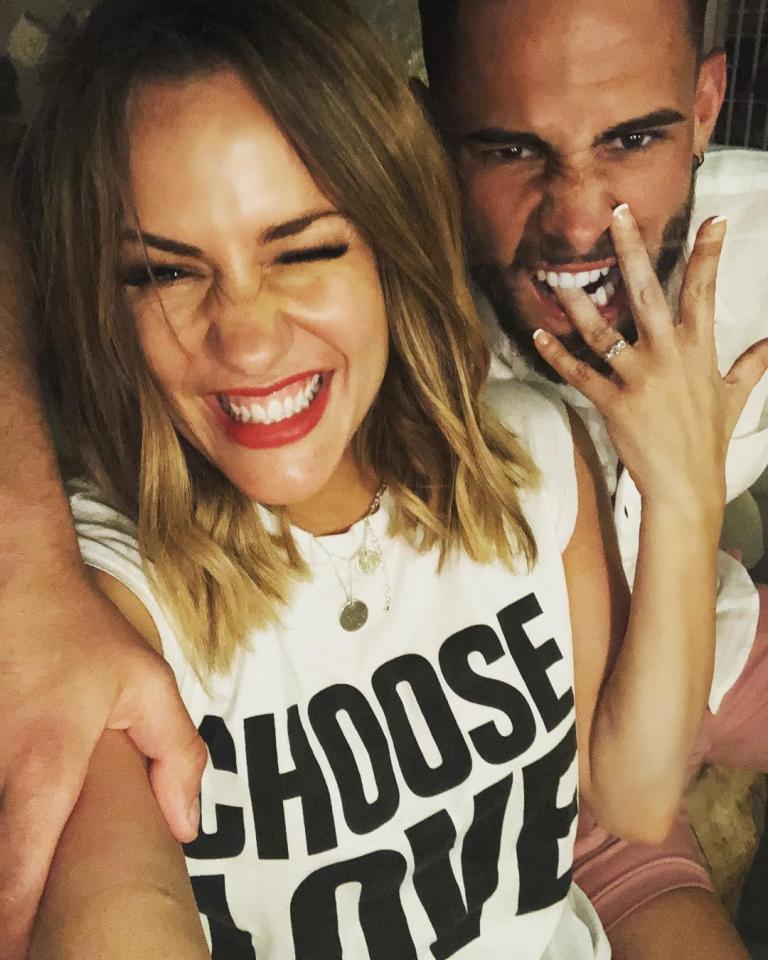 Which is good news for her new fiance and former Apprentice contestant Andrew Brady, as she has been giving him a helping hand in winning over the public. Caroline, said: “I give him advice on fame, I’ve been doing it for ages. It’s all really new to him. He’s a good lad.”

Andrew popped the question a few weeks ago, three months after they started dating. But they will be hard pushed to get hitched this summer with Love Island, which Caroline hosts, set to start in a fortnight.But she won’t be inviting any contestants from the ITV2 show.

She said: “The wedding is going to be close family and friends, probably in a pub somewhere. Someone said to me about setting a date, but I don’t know. I’m going to think about Love Island first. It’s going to be such an unorganised wedding. My sister is going to be my maid of fun, that’s the only thing I’ve decided. And my hen do has to be away from the country somewhere, that’s for sure.”

I hear ITV has a villa in Majorca she could probably rent.

Victoria can't have been too pleased… 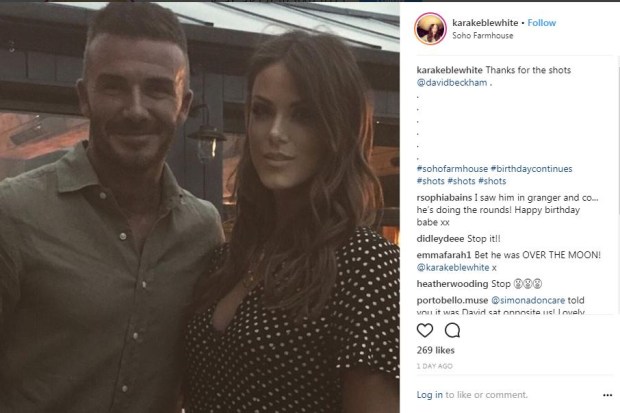 David Beckham looked happy to pose with this female fan at Soho Farmhouse in Oxfordshire.

She uploaded the snap and wrote: “Thanks for the shots.”

It was later deleted, but not before it was noticed he was buying drinks for the woman.

Victoria can’t have been too pleased . . .

Kendall Jenner kicked off the second week of Cannes Film Festival at an event which had nothing to do with the movies. As usual, the films have come second to all of the parties and red carpets and that didn’t change on Sunday night. 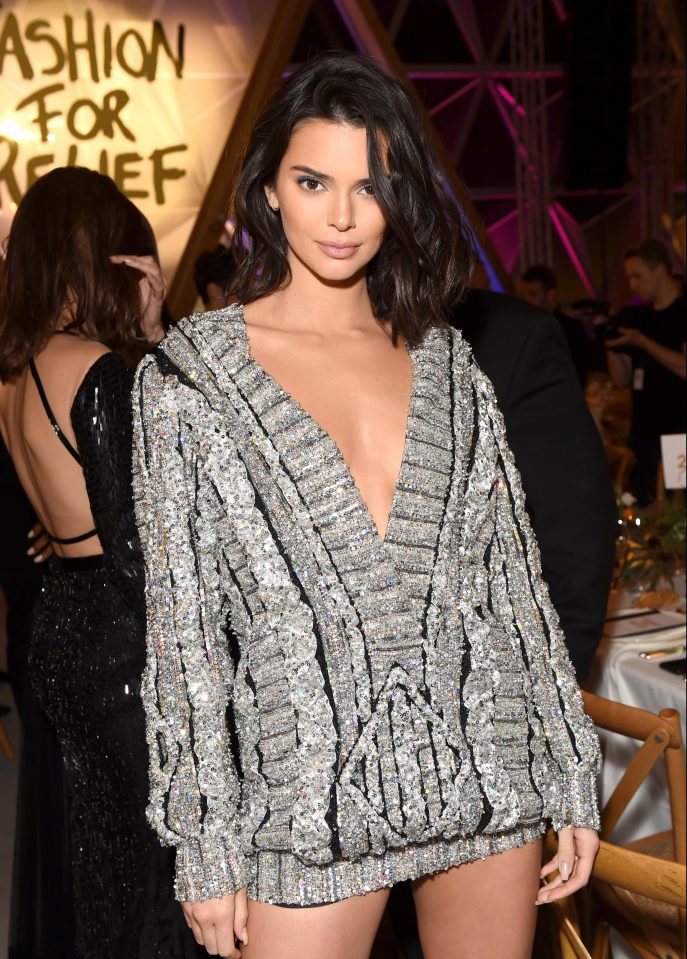 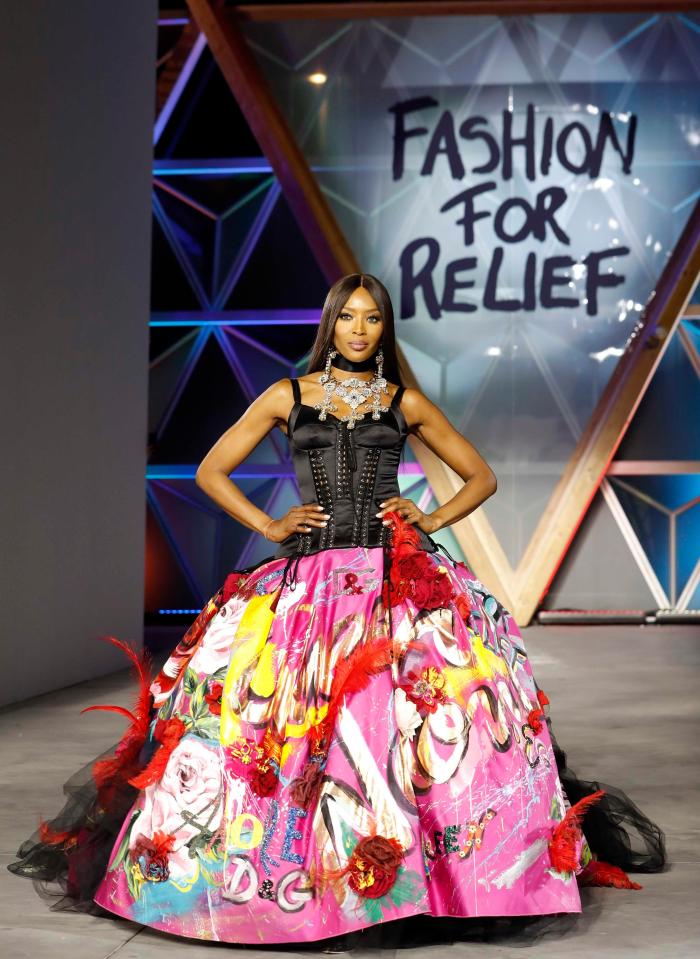 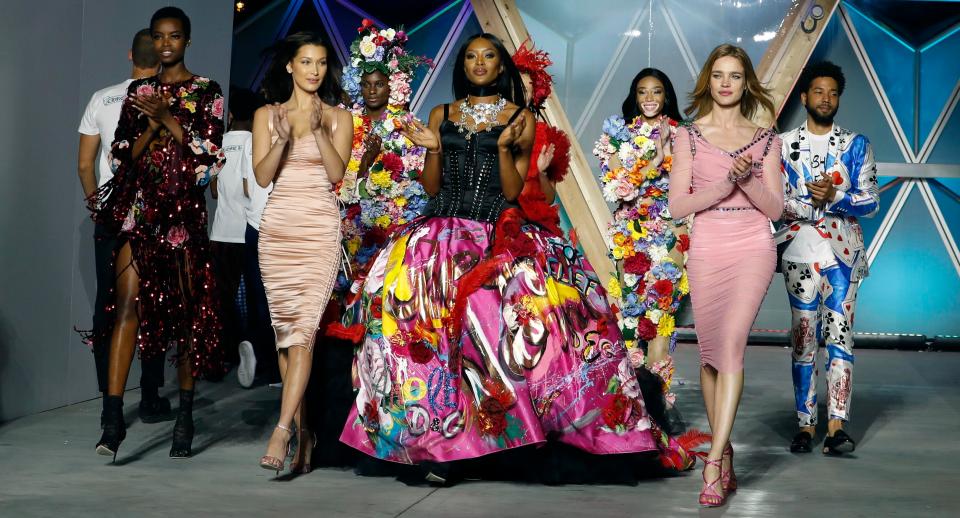 The reality star was at Naomi Campbell’s Fashion For Relief fundraiser at the Aeroport Cannes Mandelieu, where she supported catwalk pals Bella Hadid and Winne Harlow.

Although their thoughts were miles from movies, Kendall provided a touch of Hollywood glamour in this glittering jumper mini-dress.
I can’t see the attention turning back to the pictures any time soon . . .

Rapper PitBull has been forced to drop out of a gig at Cannes Film Festival today after having “vocal issues”. I imagine he suffers them quite regularly. He was due to perform at a big party but his rep said: “Pitbull is having issues with his voice. We are working on a replacement/this situation at the moment.” 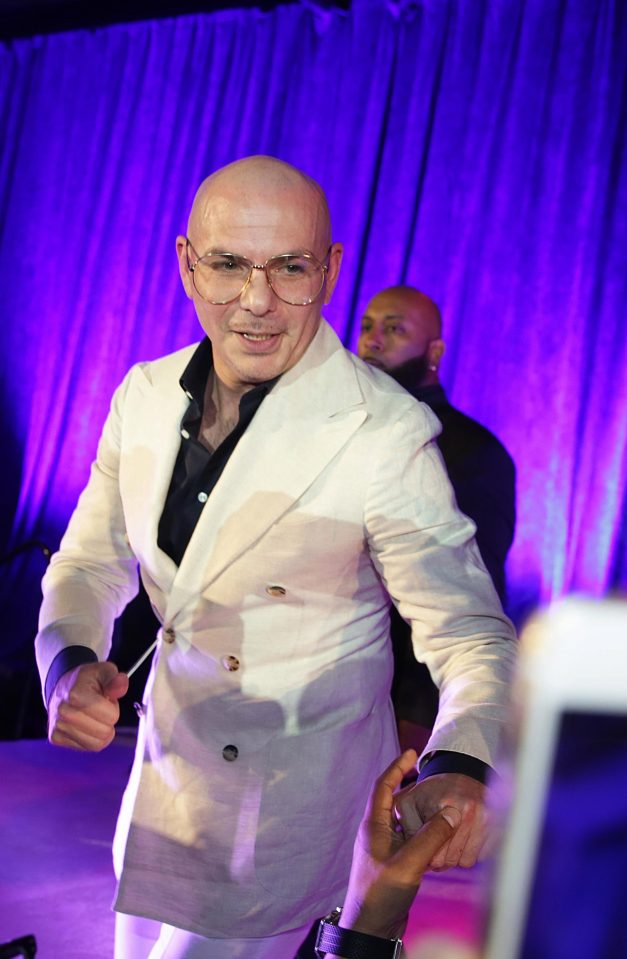 Marvel’s third instalment of the Avengers, Infinity War, has become the UK’s biggest superhero film, taking £60million after just 18 days. It beat previous superhero No1, The Dark Knight Rises, which made £56.3million in total in 2012. It also had the best global opening weekend ever, hitting $1million faster than any film. 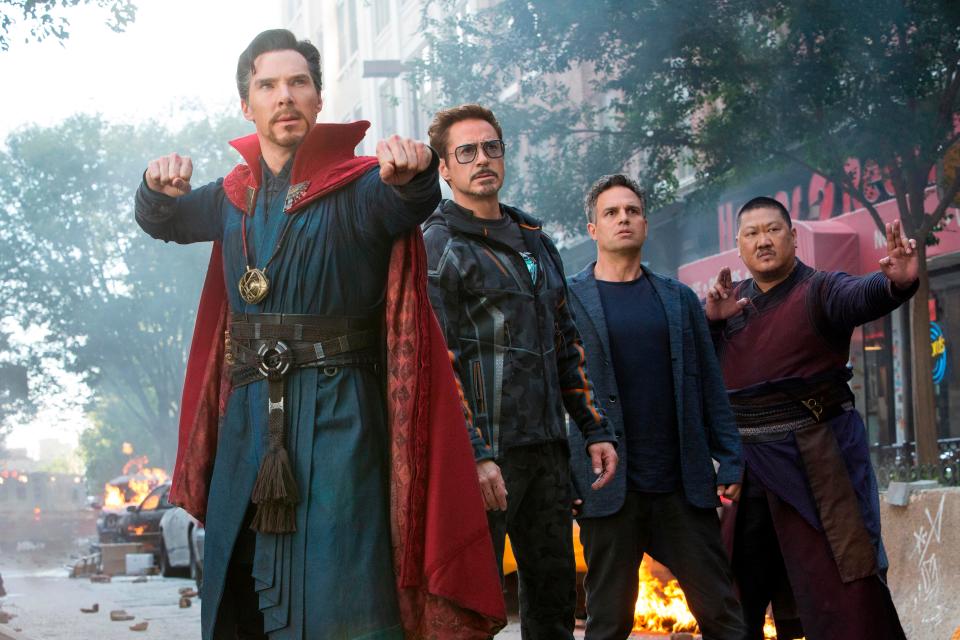 IT was Mother’s Day in the US on Sunday and Fall Out Boy rocker Pete Wentz’s model girlfriend Meagan Camper celebrated in the perfect way – by having their second baby. Praising Meagan, the dad-of-three wrote on Instagram: “So excited to introduce Marvel Jane Wentz. Feeling so grateful that she’s here.” 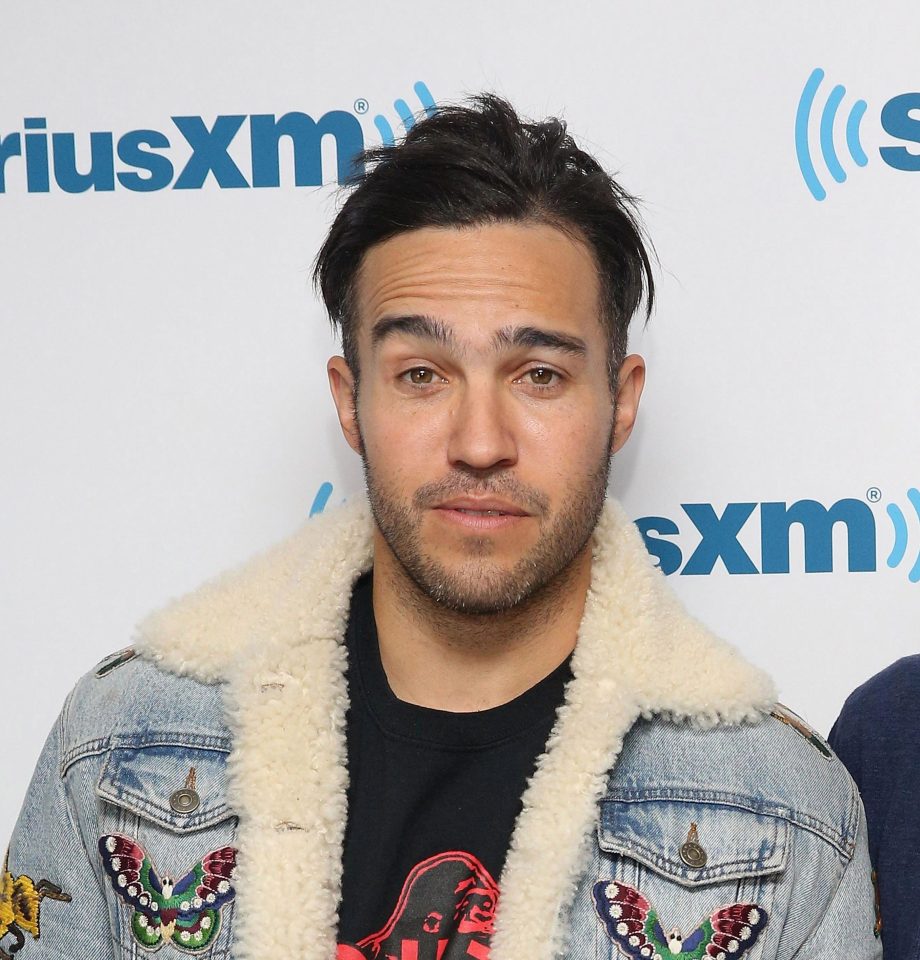 Girlband Fifth Harmony spent months denying they were going solo, finally ann­ouncing their split in March after forming in 2012 on the US X Factor. But just a day after their final show on Friday evening in Florida, band member Lauren Jauregui played her completed debut solo album to pals. That was quick. 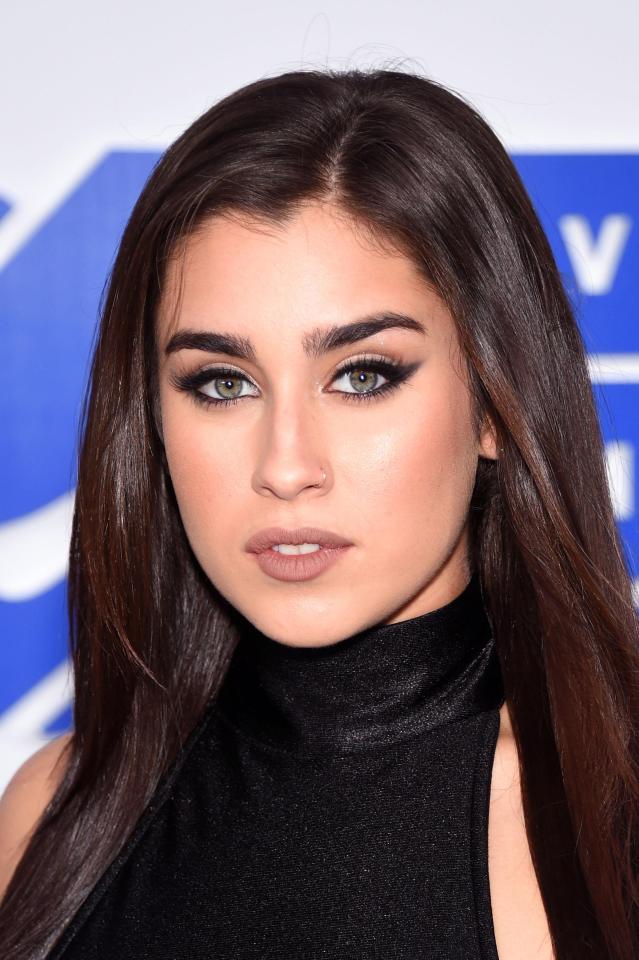 Rita Ora has admitted having relationships with “men and women” while apologising for her bisexual anthem Girls. 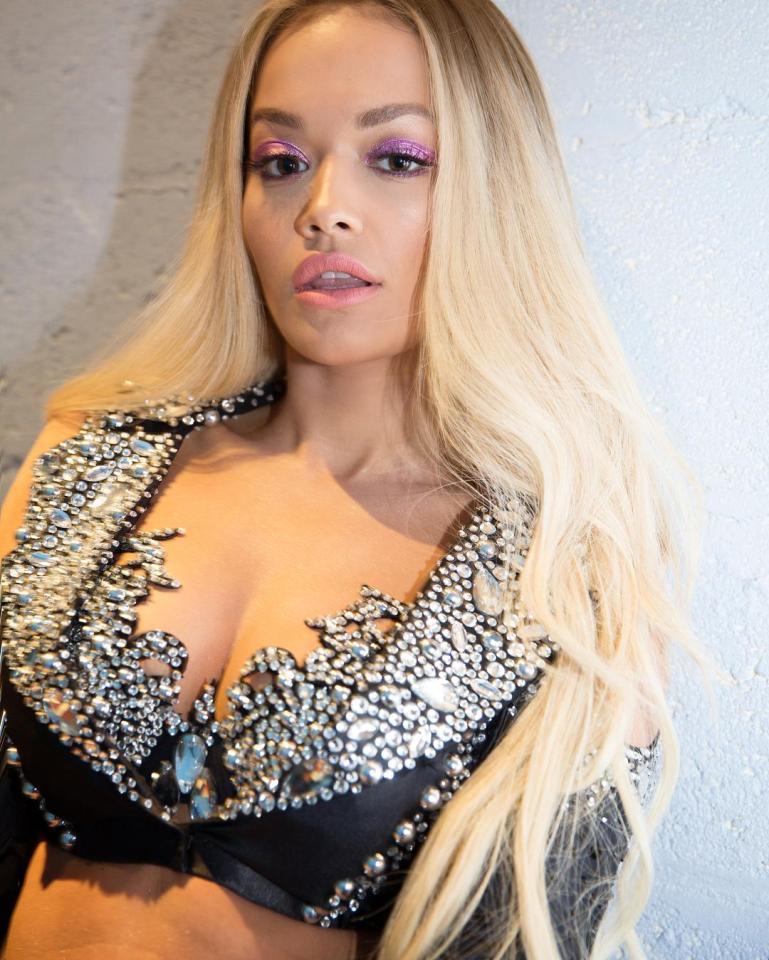 Some fans were offended by the lyrics, in which she sings that she likes to kiss women after drinking red wine. Rita said Girls, at No18 in the midweek charts, represented “my truth” and an “honest experience”.

She added: “I have had romantic relationships with women and men and this is my personal journey.”

The singer posted this snap, right, after coming off stage in Newcastle on Sunday. Rita said she didn’t want to her show to end.Dressed like this, I doubt her fans did either.

Love Island could launch a standalone series for gay contestants.

Producer Richard Cowles said: “We’d have to have a dedicated show for a gay audience with a gay villa. We’re open to everything, we try to include everyone.”

HE has already had roles in Bridget Jones’ Baby, Home And Away and Game Of Thrones and Ed Sheeran is now prepping for another stint in front of the camera. 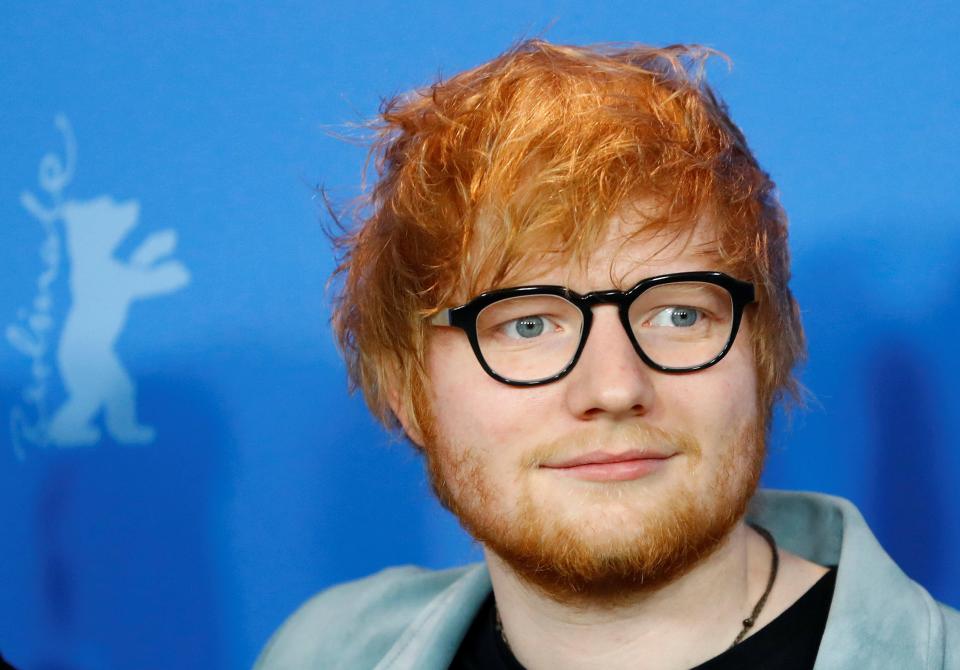 I can reveal he has signed up to appear in Richard Curtis and Danny Boyle’s movie All You Need Is Love, due next year, about a world where The Beatles never existed.

Between dates on his world tour, Ed will fly to Liverpool to film a gig scene with Downton Abbey’s Lily James, EastEnders actor Himesh Patel and members of the public.
A source said: “Ed jumped at the chance of being in the movie. He actually lives right next door to Richard, who offered him the role.

"His part isn’t massive, but it will be amazing to have him involved.”

Man narrowly avoids being hit by oncoming train in Mumbai

“What spending a year cooking with grandmothers taught me about love”