Good Morning Britain viewers were left fuming at Piers Morgan on today’s (May 22) show after the presenter cut off a report on the Manchester bombing to talk about an Instagram picture.

Marking a year since the Manchester Arena attack, which claimed the lives of 22 people, the show cut back to the studio after a news report on the attack, with Charlotte Hawkins noting that it was the “top” story of the day.

However, Piers interjected as she began to talk to draw attention to an unrelated Instagram picture posted by Strictly Come Dancing judge Shirley Ballas. 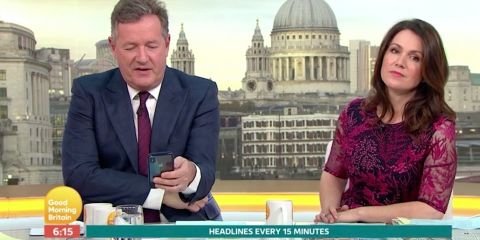 “Just looking at Shirley Ballas,” he said. “She Instagrammed a picture of us: ‘You never know who you will bump into at Chelsea Flower Show. Charming and dashing Piers Morgan.'”

After an awkward silence, Susanna Reid said “yeah”, before Charlotte added: “So you’d obviously turned on the charm with her.”

Viewers were quick to vent their outrage at Piers, especially given the context of what he was interrupting:

On today’s show, Piers also wished the new Duchess of Sussex Meghan Markle “good luck” with her fight for feminism, after a heated discussion in which he argued she could not be a feminist now that she is part of the royal family.

Good Morning Britain airs weekdays at 6.30am on ITV.

The Blended Bunch: Inside Erica And Spencer Shemwell’s Marriage