Phillip Schofield, 59, was joined on This Morning by Rochelle Humes, 32, to oversee proceedings as Holly Willoughby, 40, continues to take an extended break from hosting duties. The pair were joined by American showbiz correspondent Sam Rubin, 60, to discuss some of the headlines emerging from the entertainment sector across the pond. However, one of the topics on the agenda tickled Phillip and he took the opportunity to take a swipe at Piers Morgan, 56.

The story was in relation to chart-topper Demi Lovato, 28, speaking out about a frozen yoghurt shop and the terms they use to market their products.

Sam told Rochelle the mint chocolate chip flavour the company supplied was “amazing” but Phillip went on to explain Piers had “weighed in” on the debate.

“It must be serious,” the presenter joked before adding: “He’s got a lot of time on his hands at the moment to worry about yoghurt.”

The host referenced how his former colleague wrote a column in the Daily Mail about how disagreed with Demi’s take on the matter.

Phillip couldn’t control himself as he chuckled away to himself for several seconds and swiftly moved the segment on. 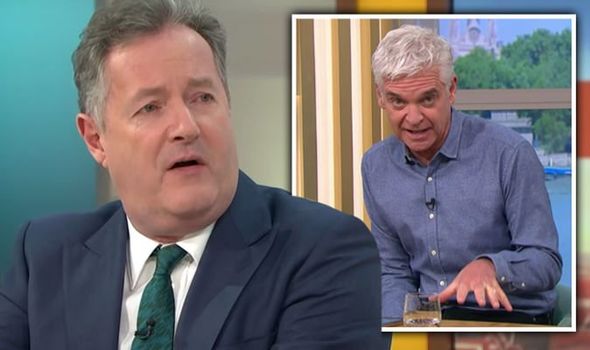 Last month, the controversial journalist hit the headlines when he shared his reaction to Meghan Markle’s, 39, bombshell interview with Oprah Winfrey, 67.

This led to a clash with his co-star and weather presenter Alex Beresford, 40, and as a result, the former host ended up walking off the set of Good Morning Britain.

The presenter did return to his seat but by the end of the day, it was announced by ITV the broadcaster had quit.

Taking to his social media platforms, writing columns for newspapers and an interview on US television, Piers has made his views on his decision very clear.

Got a lot of time on his hands

Phillip has referenced Piers’ decision to quit Good Morning Britain on This Morning, the first time being some days after the news broke.

The conversation was brought to attention when the presenter was speaking with political broadcaster Andrew Neil, 71, about his former colleague.

“Piers Morgan flounced out, and so will you be offering him a job?” the host asked in reference to Andrew setting up his own news channel, GB News.

Replying, the guest said: “I thought you were going to ask me if I was going to fill [Piers’] vacant seat.”

“We’re open to all sorts of offers. We’re about to launch GB News, it’ll be a different kind of news channel,” he added.

“I think Piers would be a huge asset for that kind of news channel. I wouldn’t want to transfer what he was doing on GMB straight to GB News, I’d want to do something different with him, at a different time of day.”

Hitting back, Phillip said to Andrew: “He is what he is though, isn’t he?”

“I think he’s also adaptable and can do different things in different ways. He’d be a huge asset to our channel… we’ll try to get him and come to a mutual agreement,” the broadcaster replied.

Since stepping down from hosting duties on Good Morning Britain last month, no one has filled Piers’ seat as of yet.

His former co-star Susanna Reid, 50, has been seen presenting with several colleagues instead of a replacement.

It is thought this is how proceedings will run for the foreseeable future, with the likes of Ben Shephard, 46, Kate Garraway, 53, and Ranvir Singh, 43, on rotation.

Neither has it been confirmed what Piers will be doing next but he has agreed to stay on at ITV for his Life Stories series.

Billie Eilish Might Debut This Much Anticipated Song At The Oscars