Praise the Lord it's over! Channel Nine's The Footy Show survived on blokey ego, smut and misogyny. Being insulted is not a winner on any level, so why did it take so long for Nine to realise how vile, manufactured, cringeworthy and dated it was? The Front Bar on Seven is an utter delight to this middle-aged, bereft-of-footy-knowledge woman. But I sure can spot the winning combo of humour, fun and hilarity. Sam, Mick and Andy are a ripper team, you can feel the genuine and mutual respect they have for each other. 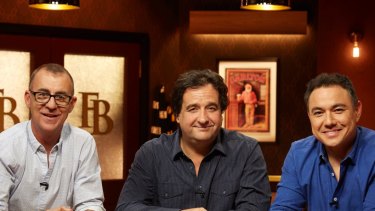 Planet America is must-see TV, in spite of Chas Licciardello's abrasive style of presentation. The trick is to focus on what he says and try to disregard the obnoxious, hysterical way he says it. It helps to keep your eyes on the subtitles and ignore his leering face.

Waleed, can’t you learn to listen and share? Kelli Underwood of ABC Offsiders encourages challenging, insightful and humorous debates about sport but at one point on Sunday she finally had to interrupt Waleed Aly with “The Oscar music’s about to start…” so other guests could speak. With such expert guests I don’t know why Waleed feels it’s his role to say “I take your point” and “You’re right about that” when others share their views with the excellent, thoughtful Underwood and not necessarily him.

The discussion on Offsiders (5/5) about Caster Semenya illustrated what is sorely missing from this program: the opinions of actual athletes, rather than pontificating journalists who have never competed at the highest level in any sport.

Say It In Broken English

I mean, so, the man told me that someone had taken a “high mark down low” and “there were numerous numbers up back”. Exhausted, I reached for my Bible that someone had “gifted” me “for free” and tried to relax reading about “David vee Goliath” and then the “Book of Reveals”. Awesome.

Leigh Sales continues to disappoint in not following up strange answers to her questions. I refer to her interview with the PM in which she asked that he explain the doubling of the deficit under the Coalition. He appeared to blame the Labor Party. Leigh Sales accepted this answer and asked another question. I suggest that a better interviewer would have asked the PM to initially explain the reasoning behind this idiotic answer.

Royal relations for all

The Australian version of Who Do You Think You Are? is generally well-produced and historically very interesting. The recent episode featuring Jennifer Byrne was revealing with an amazing discovery by expert genealogists that Jennifer was directly related or a descendant of King Edward III a famous English king in the early 1300s. The DNA that Jennifer has starts with her parents, 50 per cent from each parent. However the potential DNA percentage or heritage link to King Edward III would be less than 0.0008 per cent. Not really a close relative as there would be many thousands of people around the world with a similar link. If I had the funds to access several very skilled genealogists in the UK I feel very confident that I too would have a royal link somewhere in the distant past.

I am absolutely loving The Recording Studio on ABC. The care and attention which is given to each, and all, of the subject recorders, is both generous and heartwarming. That such a band of musicians exists augurs well for the future of musical entertainers. The big question now is, will all these recordings be released on a CD compilation, at the end of the series?

Schoolboys 14 and 15 arrested for attempted murder after lad, 14, was 'stabbed in stomach with kitchen knife'

Google’s Pixel 3 XL On Sale In Hong Kong For $2,030 Days Before Official Launch