MTV’s The Hills aired its final episode nearly eight years ago, but the possibility of a reunion for the group is apparently not out of the question.

Whitney Port spoke to Us Weekly about the girls getting back together and whether it could actually happen. 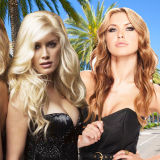 “I think there’s a slight possibility,” she said. “I mean people are always talking about it a little but there’s nothing actually concrete in the works.

“I think it would be hard to get everybody back together again just because we’re all in such different places. But it would definitely be something fun.”

On whether she would take part in a comeback, she said: “Yeah I think it depends on what it was about.

“I don’t necessarily need to go on a vacation like the Jersey Shore people and stay in a hotel room with everybody.

Whitney also spoke about her relationship with any of the other girls and whether they have any playdates.

“But I keep up with them on social media and like I see what they’re up too and I’m so happy that everybody’s happy. But we haven’t got together yet.”

A reunion wouldn’t be the first look back at the show, as Lauren Conrad did a tell-all special back in 2016 called The Hills: That Was Then, This Is Now, which prompted Spencer Pratt to call her the “same fake fake fake liar”.

Isaias Makes Landfall on East Coast, Bringing Threat of Tornadoes and Flooding as it Heads North