Holly Willoughby has opened up about how she feels about the prospect of experiencing the menopause in future, explaining that she wants to avoid feeling ‘fearful’ by learning as much as she can.

When women reach their mid-forties or fifties, many experience the menopause, when they stop having periods and are therefore no longer able to become pregnant, the NHS outlines.

With the average age of women experiencing the menopause being 51 in the UK, the menopause can cause a number of symptoms, from night sweats to anxiety and difficulties with memory and concentration.

On Wednesday’s edition of This Morning, Holly and Phillip Schofield were joined by GP and menopause specialist Dr Louise Newson and Lisa Snowdon, who spoke about her personal experience of when she became perimenopausal – the stage when the body makes the transition to the menopause – when she was 42.

Now 50, Lisa recalled how her first symptoms were suffering depression and anxiety, with a doctor initially prescribing her antidepressants, which she realised after six months weren’t what she needed.

Holly, who is 40, said that she was ‘sitting here like a sponge’, as she wanted to find out more about what the menopause entails. 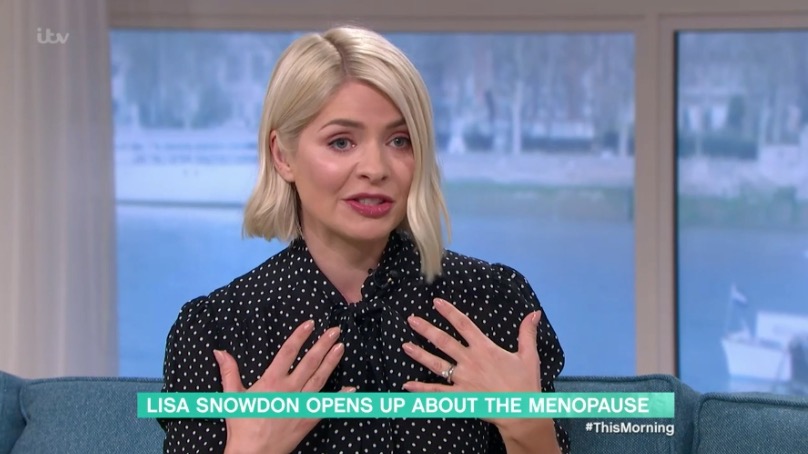 ‘This is my next phase of life, this is coming to me and I want to go into this without being fearful and I think the best way of doing that is to listen to other women, hear the stories, educate myself and learn. So I want to hear your story and what your symptoms were then,’ she told Lisa.

Lisa told them that she originally believed that the menopause would happen ‘many years in the future’, and so didn’t realise at first that she was perimenopausal.

She said that at the time, she had the feeling of ‘being completely out of control’, and found she wasn’t able to ‘do usual everyday things’ or ‘process’ things.

Her menstrual cycle also became ‘erratic’, she recollected, as some months she wouldn’t have a period, while others she would bleed so heavily that she couldn’t leave the house.

When she visited a doctor, it was ‘never mentioned’ that she could be perimenopausal, she said, adding that her partner, George Smart, didn’t understand what was going on when she would get ‘rages out of nowhere’.

Several This Morning viewers shared tweets praising the segment, with one writing: ‘#ThisMorning brilliant chat re #Menopause on @thismorning with @Lisa_Snowdon talking from her experience re premenopausal too. Thank you such useful information.’

‘This discussion and phone-in on perimenopause/menopause is so important. Thanks for covering this and proving us all with this important knowledge,’ another said.

I Tried the Ultra Flattering Leggings Hollywood Loves, and My Butt Has Never Looked Better