Hollyoaks dropped another big Adam Donovan twist tonight (April 27) as he set up his accomplice DS Roxy after getting passionate with her.

We already knew that Adam (Jimmy Essex) would be cheating on his wife Maxine in tonight’s scenes, but his ulterior motive for sleeping with DS Roxy had been kept under wraps.

The pair have been working closely over the past few weeks, after Adam (Jimmy Essex) agreed to team up with DS Roxy to bring down his father Glenn.

However, with Adam starting to have a taste for the dark side, he faced some tricky questions from the detective – who demanded to know why he’d failed to follow her instructions yesterday. 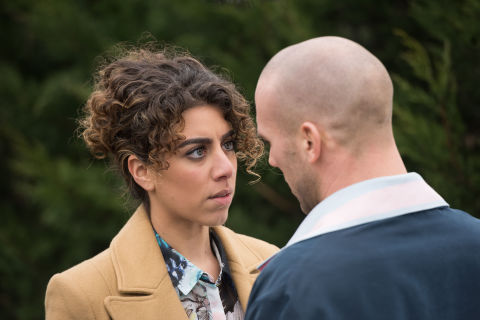 Aware that Adam could be having a change of heart about their arrangement, DS Roxy threatened to tell Maxine everything if he didn’t follow through with their original arrangement.

With the pressure rising, Adam later lashed out at Darren Osborne in The Dog, prompting DS Roxy to intervene and drive him away in her police car.

Once alone, DS Roxy struggled to resist Adam’s charms and ended up sleeping with him – unaware that it was all part of a wider plan of his.

The closing moments of the episodes revealed that Adam had filmed his liaison with DS Roxy on the dashcam – but is he planning to use the video evidence against her?

Hollyoaks airs weeknights at 6.30pm on Channel 4, with first-look episodes at 7pm on E4.

Digital Spy Soap Scoop video – hit play below for all the latest Hollyoaks spoilers, as Adam gives into temptation and Alfie gets a new girlfriend.