Why HBO Max Needs to ‘Blink First’ in Standoff With Roku

From Woe to Wonder: How One Marketing Company Pivoted During the Pandemic to Bring Joy

Experiential Supply Co. had created one-of-a-kind fan experiences for studios like Warner Bros. and Disney. Then the coronavirus came…

Like many business owners, Jasen Smith had to adjust to the coronavirus pandemic and the lockdowns it created.

Smith, the founder of Experiential Supply Co. — an experiential ​production and attractions company — had been on a roll, creating one-of-a-kind, in-person fan experiences for studios like Warner Bros., Disney and Universal.

Some of Experiential Supply’s unique projects included the Yeti Village for Warner Bros. 2018 animated film “Small Foot,” and the Derry Canal Days Festival and Funhouse for “It: Chapter II” — a close collaboration with director Andy Muschietti and his sister/producer Barbara. Both experiences, erected in the heart of Hollywood, drew thousands of visitors and built viral buzz for the films. 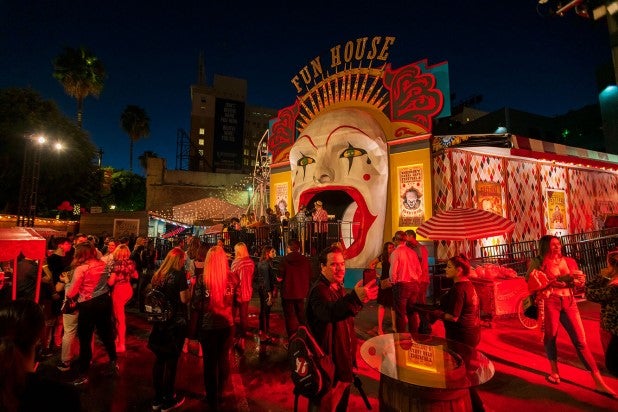 Smith had just come off a successful event for “Birds of Prey” with stars Margot Robbie and Ewan McGregor in February when the pandemic struck.

“When the pandemic hit, I was like, “Cool, we’ll be off for three weeks,’” Smith told TheWrap. “We had projects that got canceled by at SXSW with Disney and FX so it hurt a little bit. But part of was like, ‘Okay, we’ll take a little breather and get back to work.’”

But as the lockdown extended and release dates shuffled and then removed from the 2020 calendar, Smith knew he had to shift gears. He also was feeling the pressure from another source, his family.

“My oldest daughter, Emerson, was born on Halloween,” Smith explained. “My wife — the planner that she is — asked, ‘What are we doing for Emerson’s birthday? We can’t go to Disneyland. She’s not going to trick or treat. What are we gonna do, Mr. Event Man?”

“I was a little down that this was the future. I started to think, ‘How do we get back?’ and drive-thrus were being talked about,” Smith recounted. “I was watching videos, and I just didn’t see anything that could match up with the walkthrough experience that we had done that really transports someone to a different world or get them out of the place they were when they entered.”

This was already late July, when the summer blockbuster season was awash. Smith turned his eyes towards the fall.

“I thought to myself, ‘Why can’t we do Halloween?’ It was our first time going from work for hire for the studios to consumer-facing. I was really worried because it’s easy for us to show a brand in a sales pitch and say this is ‘It.’ When the public comes to ‘It,’ ‘Ready Player One,’ or ‘Lego,’ they’re not coming for us, they’re coming for that intellectual property. That’s the lead horse, not us.”

That was the huge — and risky — unknown.

“I was really nervous the public might not care what we’ve done. They might not hand over their money based on that. So we gotta really focus on the experience and where you’re going to fill the gaps,” Smith said. :If you say you’re going to create a Halloween tradition, you better nail it.”

Experiential Supply Co. came up with Hauntoween, a Halloween drive-thru experience in the San Fernando Valley. Smith and his team were challenged to do something that COVID-safe but also more entertaining and bigger than anything done before.

“I felt a lot of drive-thrus were doing pass-by routes with pretty lights or little sets. I wanted to put people inside of something,” Smith said. 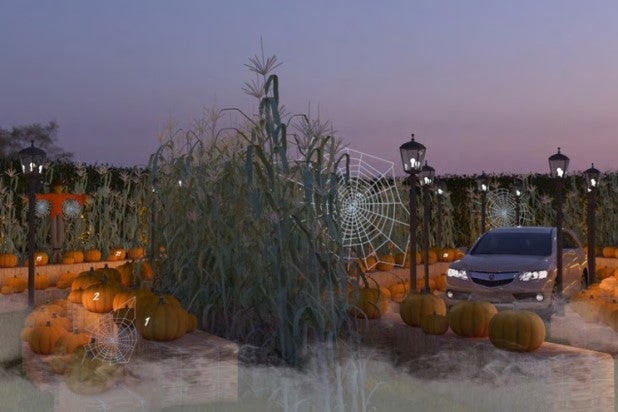 For three weeks in October, they transformed a parking lot in Woodland Hills into a “neighborhood” (see the time-lapse video here) where elaborately costumed performers at each house handed bags of candy (at a safe distance) to trick or treaters in their cars. They replicated a pumpkin patch experience where visitors could pick their favorite and have it safely delivered. Cars also got to drive through a dazzling jack-o-lantern tunnel and activations made by sponsors, including Party City.

It worked out better than Smith could’ve imagined. “We had people creating counterfeit tickets to experience this world we created,” he noted. Over 27,000 cars visited Hauntoween. He realized halfway through he had to literally build upon what he created.

“There was a reason for that, not just because the infrastructure is here,” Smith explained. “Hollywood and Vine — where we did all the Warner Bros. stuff — we created a viral destination. People knew when they started seeing something built over there it was going to be big and going to be kick-ass. We proved that people would come out to the Valley and have a great time at our location. I wanted to repeat that same vibe. This parking lot in Woodland Hills, there’s something going down here.” 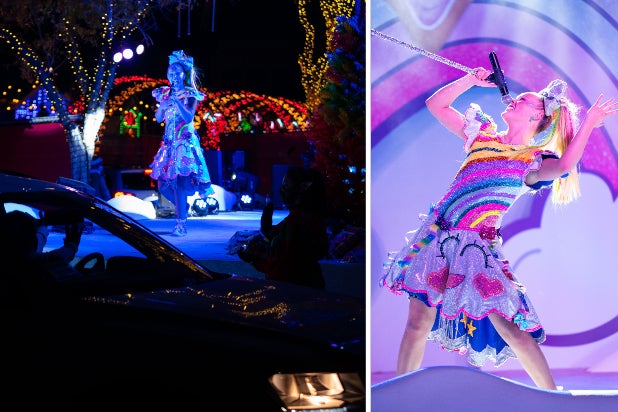 The result was WonderLAnd — a winter holiday experience for Los Angelenos (hence the name). Some of the Hauntoween attractions were updated (the jack-o-lantern tunnel transformed into snowflake one) but many of them were new and improved, thanks to sponsors like TBS (who have a holiday monster truck experience that has to be seen rather than described), Party City and Amazon Fresh. There’s also a celebrity component: singer and social media star JoJo Siwa has her own “Rocking Christmas” area and fans were able to drive around her stage during a special performance. Siwa (and Nickelodeon, which she is signed too) was courted after she visited the Hauntoween experience.

WonderLAnd continues through Dec. 30. As for what’s next, Experiential Supply has already teased their next project with the silhouette of a very famous mouse that serves as the mascot for the world’s largest entertainment company.

But for now, Smith is committed to turning woe into wonder during these challenging times: “At our core, we care about the customer experience, whether it’s free or it’s paid. That’s what we’re creating the whole thing for — for you.”

Power Book 2 release date: How many episodes are in Power Book II Ghost?