Adam Driver may be the most notable former Marine to earn an Oscar nomination, but David Alvarez could be the first Tony winner turned infantryman to nab one. In Steven Spielberg’s revelatory remake of “West Side Story,” a  production that both makes a case for itself while honoring the achievements of its predecessor, the actor and dancer brings renewed life to the character of Bernardo. Trained as a ballet dancer before becoming one of the youngest people to win a Best Actor Tony for his performance in “Billy Elliot the Musical” on Broadway, Alvarez had all but left show business when he got the call to audition for Bernardo.

After seeing the 2009 Broadway revival, which was directed by Arthur Laurents and featured translated Spanish lyrics by Lin-Manuel Miranda, he had dreamed of doing the show. “I was so in love with the sound, the music, the characters, and the Shakespearean essence to it. And I just remember coming out of there and thinking that maybe one day I’d like to be in ‘West Side Story,’” Alvarez said during a recent phone interview. He was backpacking in Mexico when he got a call from Cindy Tolan, the casting director who remembered seeing him in “Billy Elliot.”

“I wasn’t really taking any projects. I had quit the business kind of. I was focused on my philosophy degree and my own personal growth. But when I found that Steven Spielberg was making ‘West Side Story’…I was definitely inspired,” he said. “So it kind of took that to bring me back to the business, plus working with Steven Spielberg and Tony Kushner, Rita Moreno. All these legends, how could you turn that down?”

Aided by Kushner’s brilliantly updated script, the racial commentary of “West Side Story” comes to the forefront where it belongs, highlighting the daring of the 1961 original while ushering its urgent social message into the 21st century. Where Tony and Maria’s ill-fated love story was once a gentle plea for tolerance, Kushner’s new “West Side Story” is an incendiary denouncement of the brazen racism and bigotry that was unleashed since the 2016 election of Donald Trump. Kushner added a part for Moreno by turning the character of Doc into his widow, Valentina, thus adding another Puerto Rican character. Careful not to change the original so much as to be unrecognizable, Kushner also beefed up the existing Puerto Rican characters, starting with more screen time for the beloved supporting couple — Bernardo and Anita. 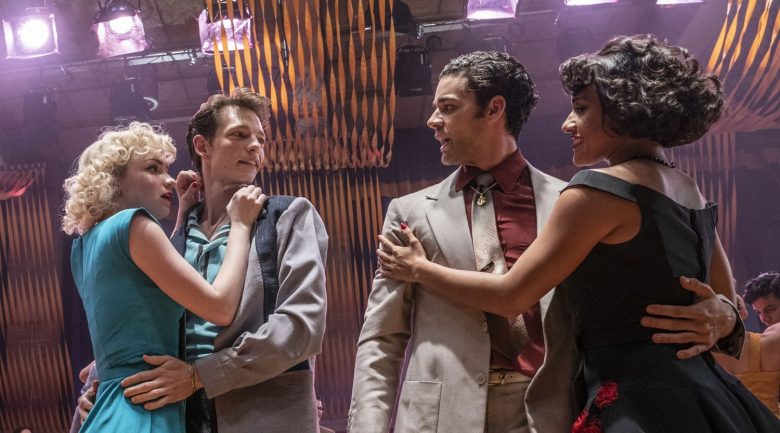 “It’s a very passionate relationship. [Ariana DeBose and I] agreed that both Anita and Bernardo are passionate people, therefore that love is going to manifest passionately. They’re very strong people,” said Alvarez.

The 2021 film spends more time with Maria, Anita, and Bernardo at home, showing their domestic life, the couple’s intimacy, and the familiar squabbles of family. They emerge as a tight-knit trio, bringing all three relationships to the forefront in a way that underscores the dramatic conflict and eventual tragic ending.

In addition to being a phenomenal dancer, Alvarez proves his acting prowess in a forceful monologue during the rumble, where he accuses Tony of using Maria to make himself feel like a better man. It’s a brilliant piece of writing that adds depth to Bernardo, revealing more nuanced motivations than “overprotective older brother.”

“I don’t think he deserves my sister. My problem with him is, in my head, he’s using my sister. And that’s why I can’t understand the love that they have,” said Alvarez. “One of my favorite lines in the movie is when Chino says, ‘Bernardo was a fool,’ because I 100-percent agree with that. Bernardo was a total fool. He let that anger control him to his death, to the end of what he has built with Anita, to the end of watching his sister grow up. So that all comes together at the end where he realizes, ‘Oh, I’ve lost it all. And it was my fault. I got myself right here.’”

Whether Oscar voters choose to recognize Alvarez or not, there’s no doubt that Hollywood will. The actor stayed quiet about any pending projects, preferring to muse on finishing his philosophy degree.

“I’d love to continue acting, but I have to be passionate about it. I have to be inspired with it or I’d rather just do something else, to be honest,” he said. “So I’m just going to take it one step at a time. If it’s meant to be, the right roles will come my way, and I would love to portray other things. But if not, I wouldn’t mind finishing my degree to become a philosophy professor or something.”

Jennifer Lopez Has a Doppelganger, and She's a Bodybuilder in Texas

Who are the Queen's great-grandchildren, how old are they and how many cousins will Meghan Markle's baby have?