Former Disney kid Austin has been widely praised in the role, as he stars alongside Tom Hanks (Colonel Tom Parker), and Olivia DeJonge (Priscilla Presley).

Even Presley’s real-life family had nothing but praise for Austin, with his daughter, Lisa-Marie saying: ‘Let me tell you that it is nothing short of spectacular.

Meanwhile, Presley’s widow, Priscilla, was moved to tears at one preview screening, sharing a hug with actor Tom.

We’ve already been given sneak peeks of Austin, Tom, and Olivia in the movie – and their transformations are pretty incredible. 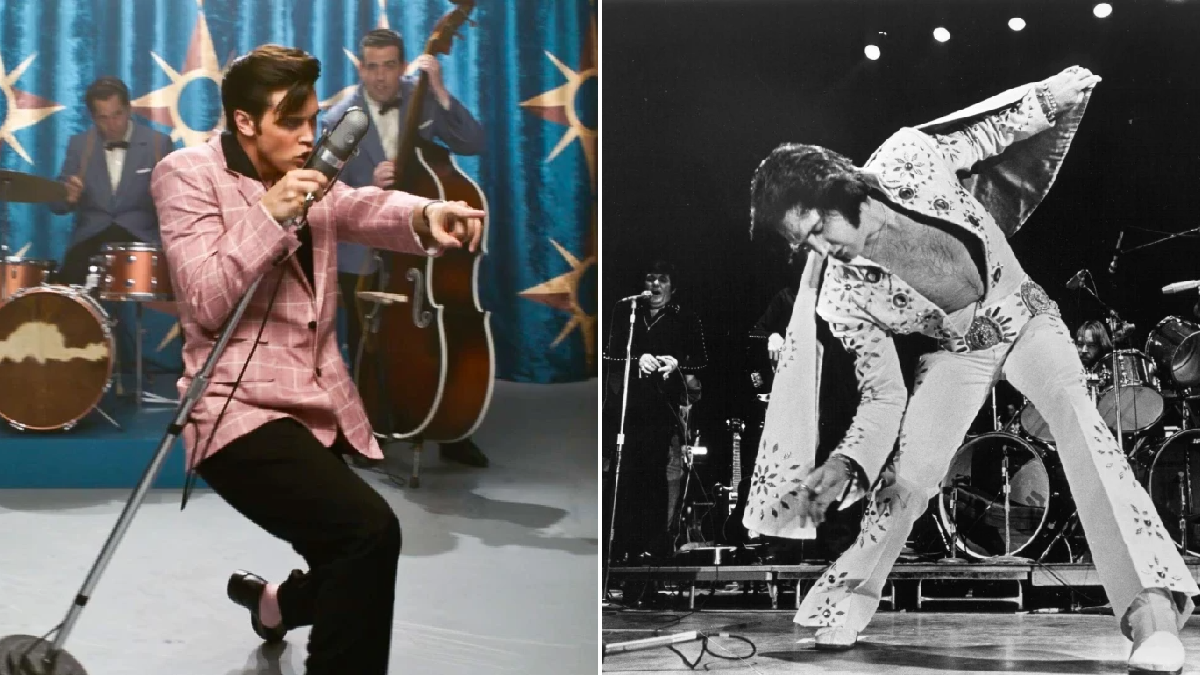 Austin has made no secret of the lengths he went to in order to play the king of rock ‘n’ roll, even admitting his ‘body started shutting down’ immediately after wrapping the film.

He also explained his ‘life was on hold’ for two years.

Speaking at a press conference at the Cannes Film Festival, Austin told reporters: ‘I basically put the rest of my life on pause for two years and I just absorbed everything possibly could.

‘And that my eyes would look exactly like Elvis’ eyes and you wouldn’t be able to tell the difference.’

While they’re not quite identical, Austin – as well as the film’s hair and makeup team – have done an incredible job.

The actor plays the music legend from the beginnings of his career and through his journey to become a music ‘god’.

Tom Hanks perhaps looks the most different of the entire cast in his role as Presley’s manager, Colonel Tom Parker.

The actor wore heavy makeup and prothetics to transform into the man himself, but admitted he thought, “What have I done?” when he was shown a picture of him.

Tom explained of the divisive role: ‘Baz talked about the Colonel as this great carney.

‘Knowing that, the carney’s job is to bring people to the glittering lights on the outside of town, promise them something they’ve never experienced before, and then, almost giving it to them, at a cost.

‘When he said that, I said, ‘I’m your man, now please show me a picture.’ When he showed me a picture of the Colonel I thought, “Oh my God, what have I done?”‘

Parker continued to manage Presley until his death. In 1980, a judge ruled that his management practices had been ‘unethical’. He died in 1997.

Olivia also had a difficult job, playing Presley’s wife Priscilla, who she knew would eventually see the film.

She admitted she was ‘intimidated’ by the role but Baz put her at ease.

‘Given the nature of the story and the way that it’s been told, I really just wanted to make her grounded and real,’ she explained of the role.

‘Obviously, I watched a lot of interviews, but they were from when she was older, in her early 30s, whereas the film covers the years when she was 14 through to just after her divorce when she was about 27 or 28,’ Olivia added to Vogue.

‘And Baz really encouraged a lot of freedom to experiment. For me, it was just about playing a girl that really loved a boy.’

After his highly-praised role in The Power of the Dog, Kodi Smit-McPhee has taken on the role of Jimmie Rodgers Snow, who performed alongside Presley.

Jimmie went on to become a preacher.

Kodi hasn’t given much away about his role, but told Newsweek of being on Baz’s set: ‘To see how he works, how he flies by the seat of his pants, and how he has this spontaneous creativity that he just runs with.

‘He’s not bound by limitations which most people usually are in our industry when making a film, whether it’s money, producers, sets, time. He just flies with his gut and it’s an amazing thing to see because he absolutely pulls it off.’

Elvis is in cinemas now.

British pensioners are feeling younger than ever, survey shows

Who is Jamie Theakston and what’s the Celebrity Gogglebox star’s net worth? – The Sun